These awesomely crafted Star Wars cosplays can give you some inspiration for your own Halloween costume!

You Are Reading :10 Amazing Star Wars Cosplays To Inspire Your Halloween Costume 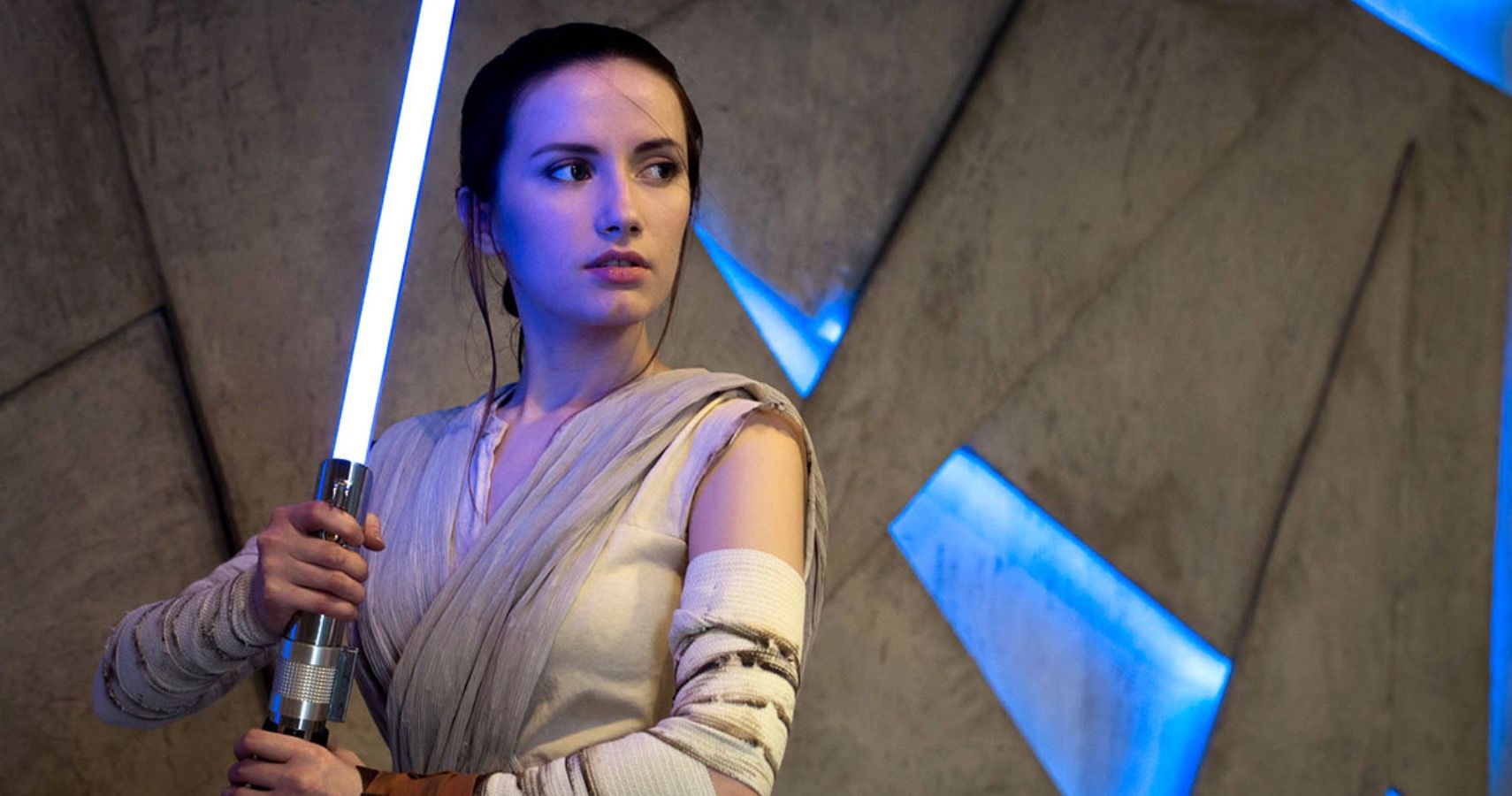 Every year, a Star Wars costume is a popular choice for Halloween. There are so many to choose from, after all. Do you want to go as a main character like Han Solo or Princess Leia? Or would you rather go a little more anonymous, like a Stormtrooper or an x-wing fighter pilot? The only challenge is getting a costume that looks perfect.

These ten cosplayers created ten perfect costumes from the Star Wars universe. They crafted these all by hand, watching the movies over and examining photos to make sure they were getting it all just right. And their hard work really shows. Let their amazing work inspire you for your next Halloween costume. 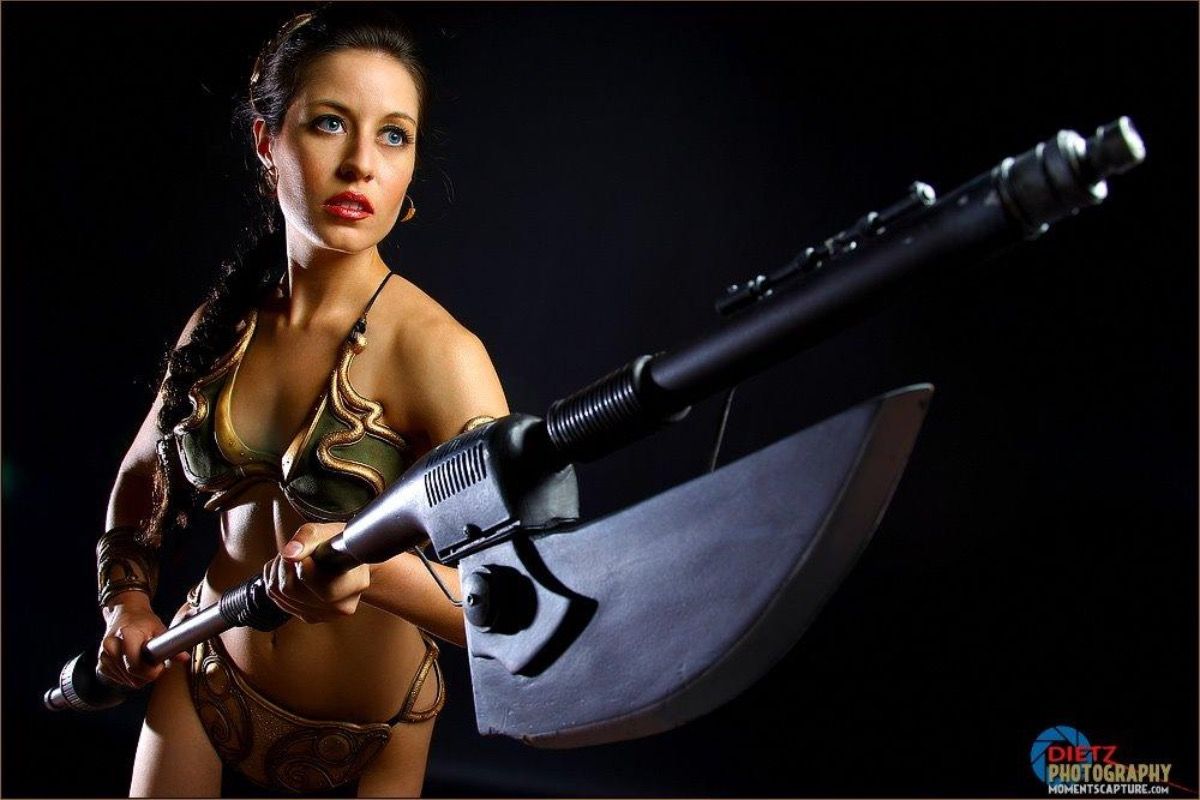 Leia in the gold bikini is such a ubiquitous image that Friends even made an entire episode about Ross wanting Rachel to dress up in it. It’s so popular that a cursory search online yields dozens of retailers selling it. But those costumes always look cheap, with plasticky flat detailing where there should be sculpted metal.

Scruffyrebel did not give into a cheap version of this costume. She may not have the chain necklace on here, but she does in other photos of this cosplay. She got the details perfect, down to the bracelets and the earrings Carrie Fisher wore in the movie. It’s an impressive costume, one that puts the cheap ones at the store to shame. 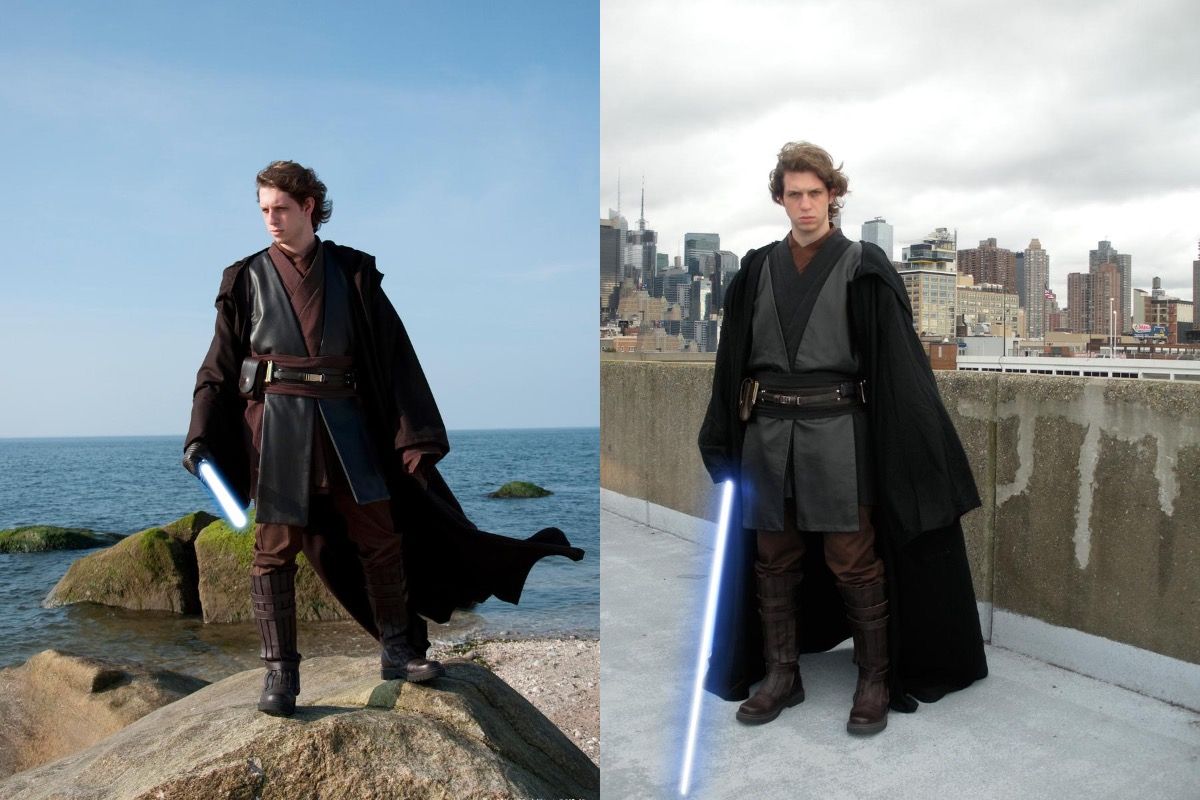 Before he fell prey to his darkest thoughts and therefore the Dark Side, Anakin was meant to be the hero of the Republic. Akaius captures his energy perfectly here, with this excellent cosplay of Anakin before he became Darth Vader. We can already feel Anakin’s anxiety coming out, even as he is still trying to fight for the Republic and Padmé.

Impressively, Akaius even manages to look a bit like Hayden Christiansen here. He gets the hair absolutely perfect, for one. Unfortunately, he doesn’t go into detail publicly about the process of building this outfit, so how he made the boots so perfect remains a mystery. 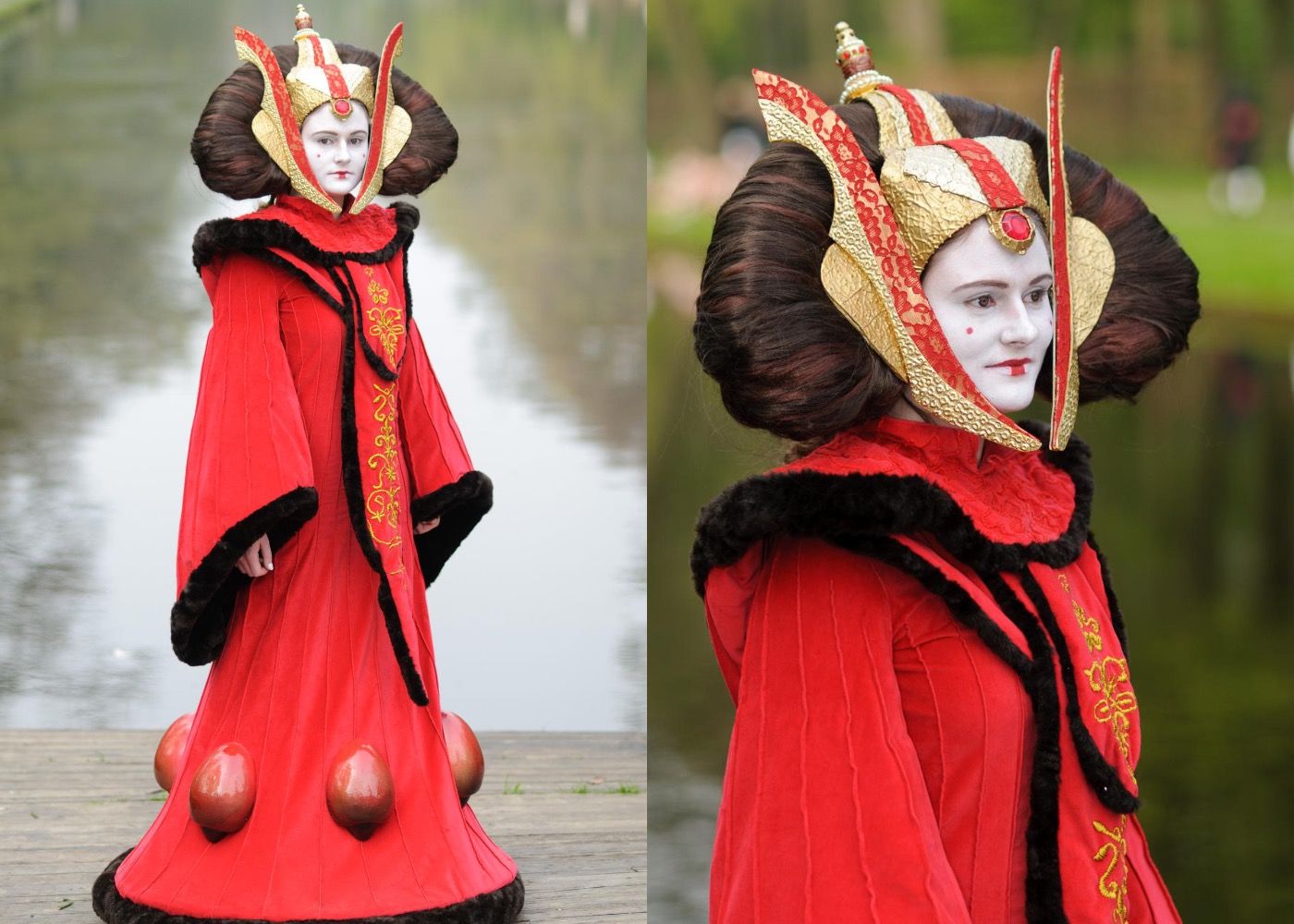 What a cosplay. The dress is perfect execution of the dress Queen Amidala wore when viewers first met her in Phantom Menace. Take a closer look at the domes at the bottom and the stitching on the front panel of the robes–they’re so intricate and on point. And the headpiece–we have to wonder how much it weighed! It looks so similar to what Natalie Portman wore in the movies, even down to the flowered patterns on the parts that frame her face.

Riluna’s execution of this cosplay is one for the ages. She made this back in 2011, but it is still one of the most popular Queen Amidala cosplays on DeviantArt. You can scroll through her profile and see the Zelda costume she did, as well as some of the drawings and instructions she came up with while building the costumes. 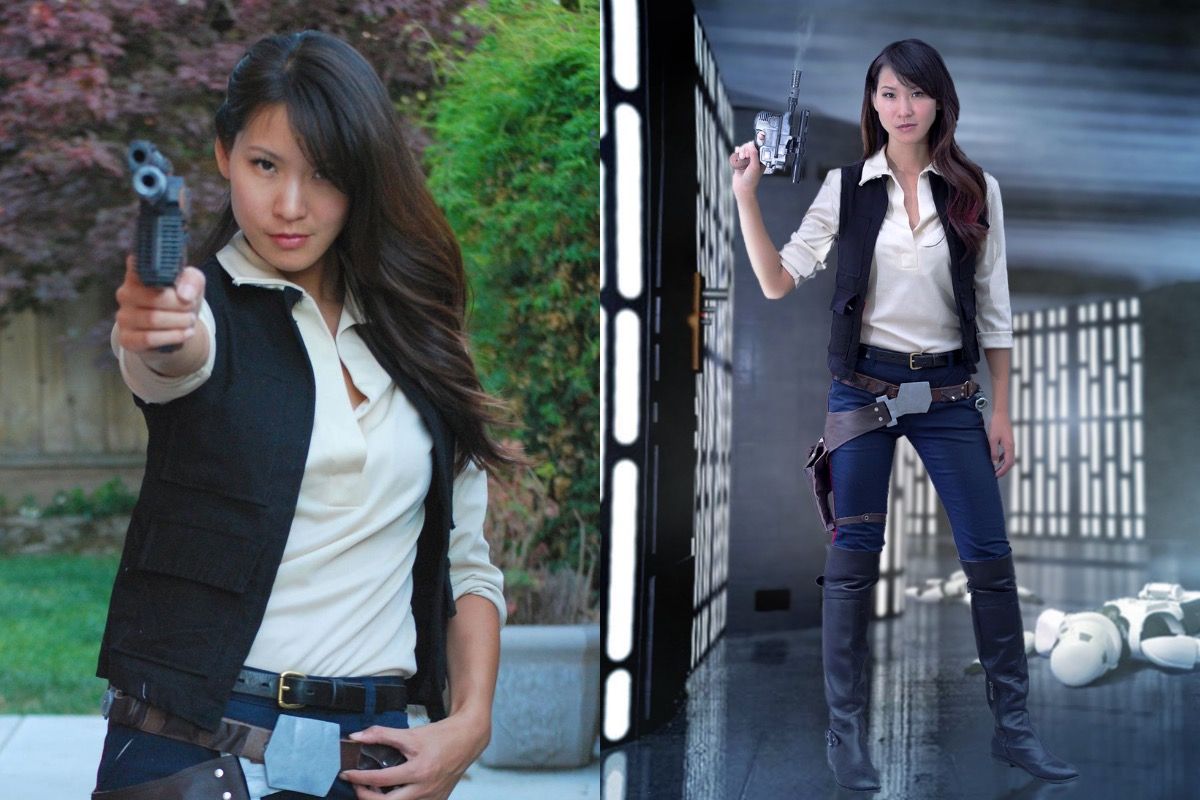 Everyone’s favorite “stuck-up, half-witted, scruffy-looking nerf herder” is perfectly recreated in this cosplay by The Stylish Geek. This cosplay might not look too hard (it’s a polo and a vest and jeans?) but it’s not as easy as it looks. To make it work, milkchess actually reconstructed all the clothing then made the leather pieces from scratch. That’s dedication to a cause.

This cosplay was done in 2012 for San Diego Comic-Con, but it ended up being so popular and well-known that milkchess actually walked the red carpet in it for the premiere of Solo in 2018! Yes, the actual red carpet premiere with the stars of the movie. You can read more about that, as well as cosplaying tutorials, right here. 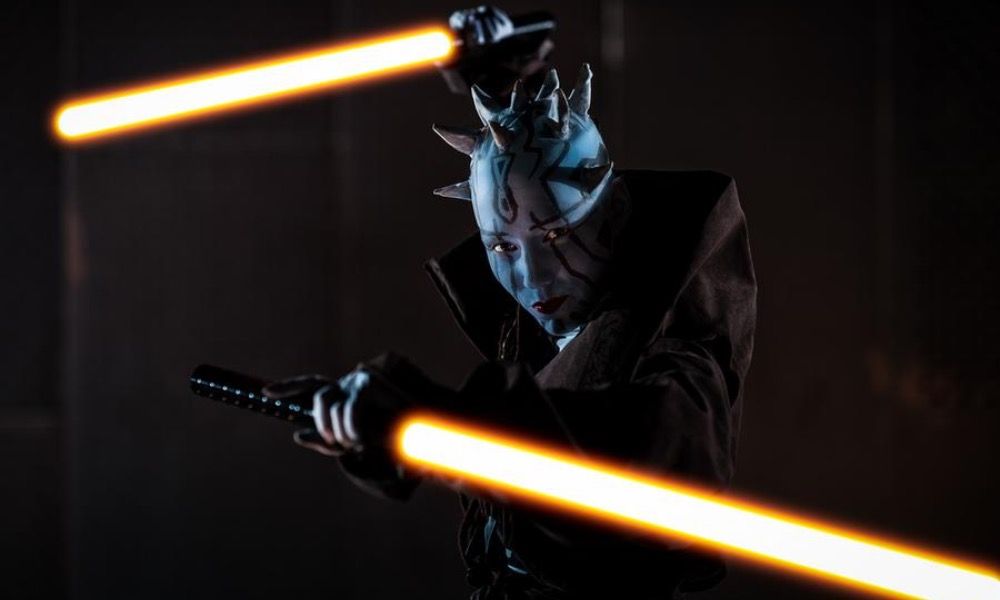 So far, we’ve covered a lot of the more popular characters from the Star Wars franchise. Those are the ones that everyone at least considers dressing up as once in their life. But this cosplay by TifalA takes us on a truly deep dive into Star Wars canon.

Darth Simi is/was a female Sith priestess, one who managed to keep herself alive for thousands of years by sacrificing young Jedi to the dark side. She’s first introduced in the book Star Wars Art: Visions, which was released in 2010 and contains over a hundred images of paintings inspired by the films. Beyond that, fans don’t know much about her, and no one knows if she’ll ever show up in a movie. But that didn’t stop TifalA from building an amazing cosplay from the painting, down to the grayish-blue skin and full body black tattoos. 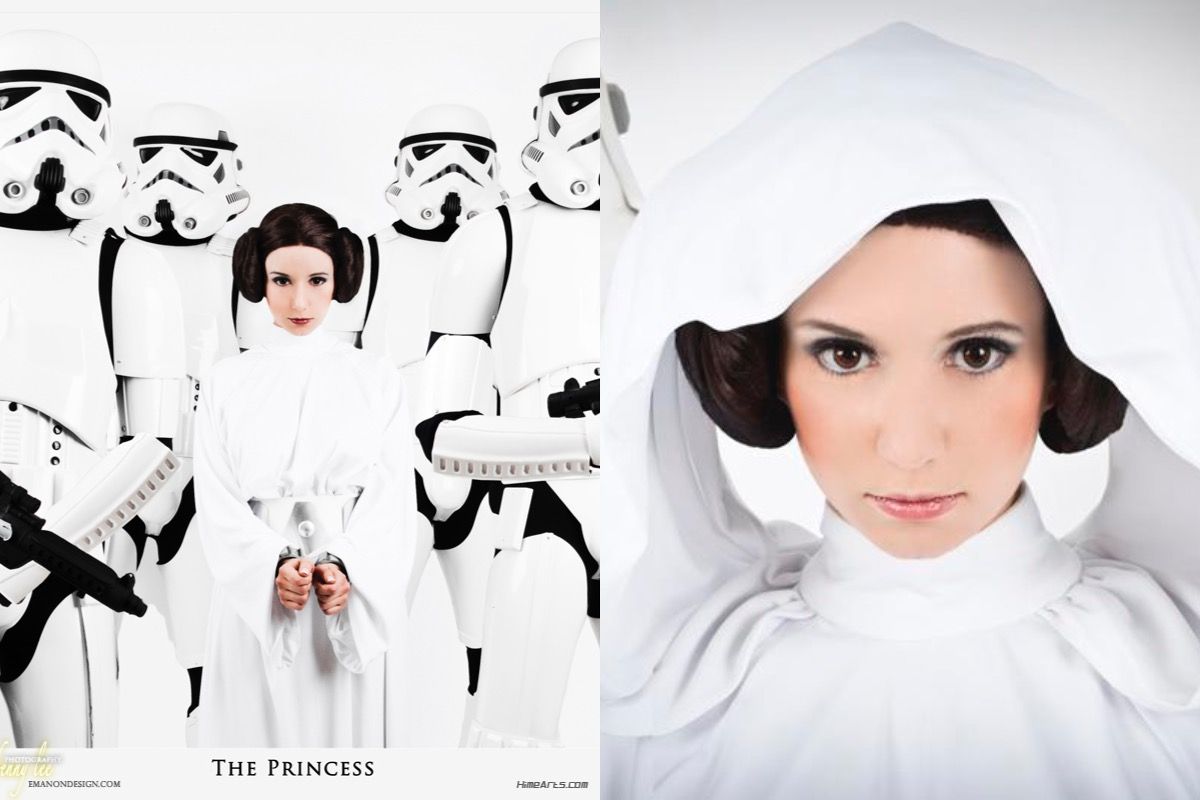 The iconic white robes of Princess Leia, the outfit that launched a thousand Halloween costumes and millions of fans around the world. Untold numbers of people have cosplayed as Princess Leia, so picking just one really good cosplay of her white robes is an undertaking. What made this one stand out what the research that Riddle1 did into Leia’s hood. In fact, it turns out it’s not a proper hood at all. There’s a hole in the back, so it’s more like a loop of fabric that Leia can put up for unknown reasons–maybe to frame her face better?

In any case, you can see the loop perfectly in the photo on the right. The left photo shows how well she nailed both the thick silver belt that cinched her robe as well as the handcuffs she wears when she’s arrested. It’s a laudable execution of an iconic costume. 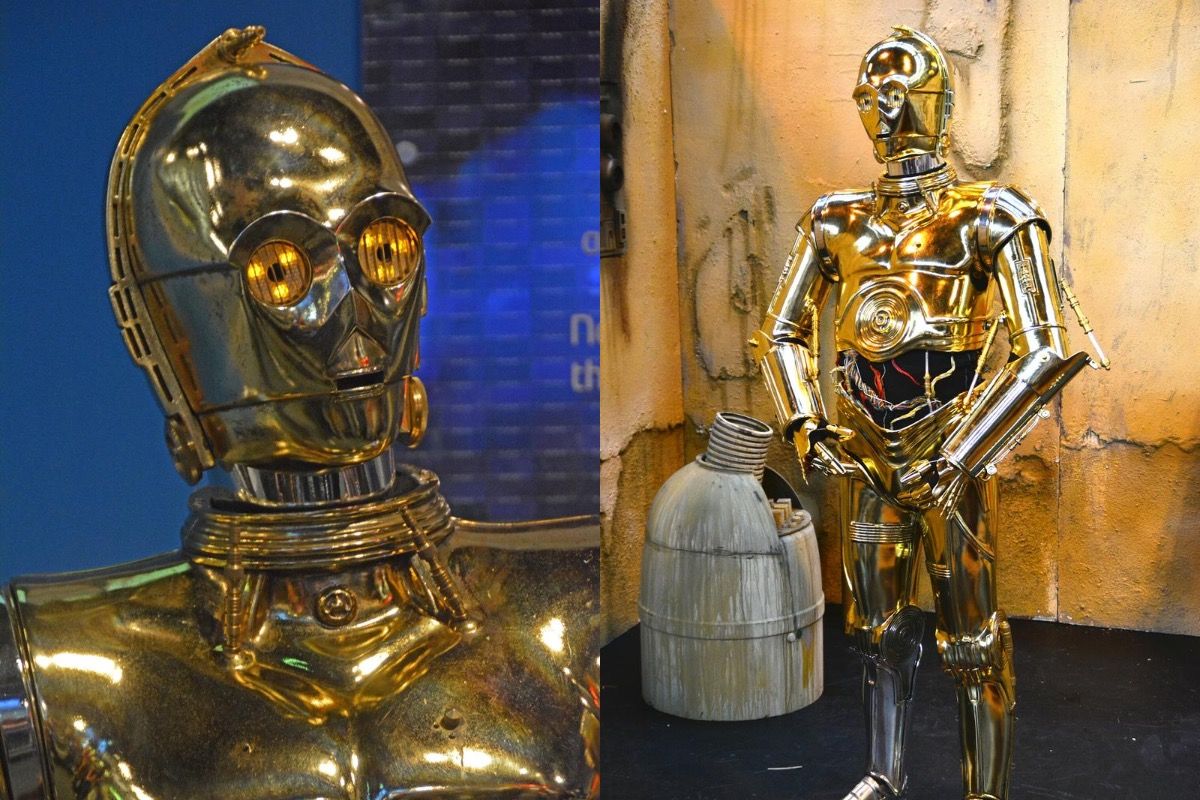 No one would blame you if you thought these were just stills of C-3PO from any of the movies he’s in. But this a cosplay, executed with so much talent by masimage. Birmingham Comic Con 2013 was where the costume was unveiled. Witnesses promise that there really was someone walking around and talking from inside the costume, so it must just be a very tight fit.

However it was done, this cosplay is a nearly perfect replica of C-3PO, down to the somehow emotive face the robot wears. Despite never changing, it somehow manages to look both proud and extremely confused, which is exactly what C-3PO’s personality is like throughout the movies. Impressive all around. 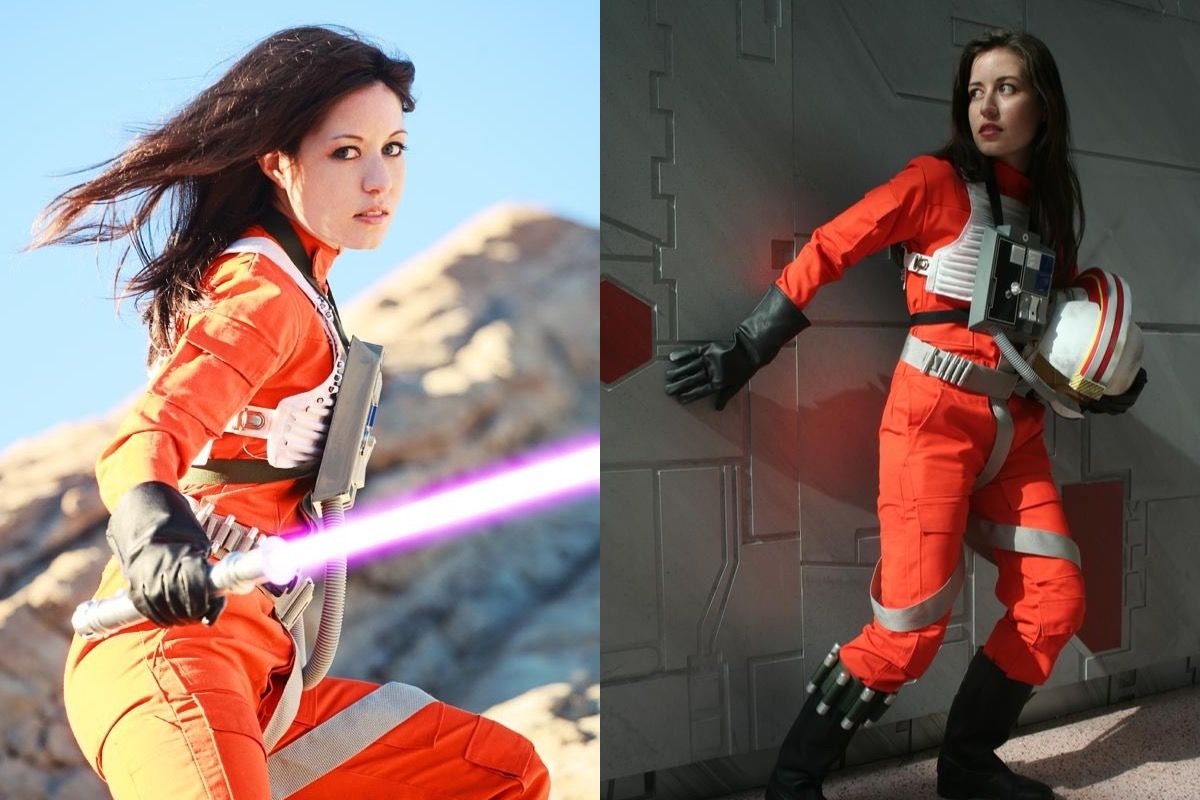 In the movies, the only known child of Han and Leia is Ben Solo, also known as Kylo Ren. But the expanded universe of books and comics have a different family tree for the Organa-Han family, including a tough Force-sensitive girl who grows up to fight for the Rebellion like her mother. It’s too bad that we don’t get to see Jaina in the mainstream movies because her story is full of grand adventures, intense fights, and close calls.

Nevertheless, scruffyrebel captures the essence of Jaina’s character with this cosplay. She recreated Jaina’s x-wing fighter gear, a costume that is no easy feat. Making this outfit would be a great challenge–and a cozy costume if you’re celebrating Halloween somewhere cold. 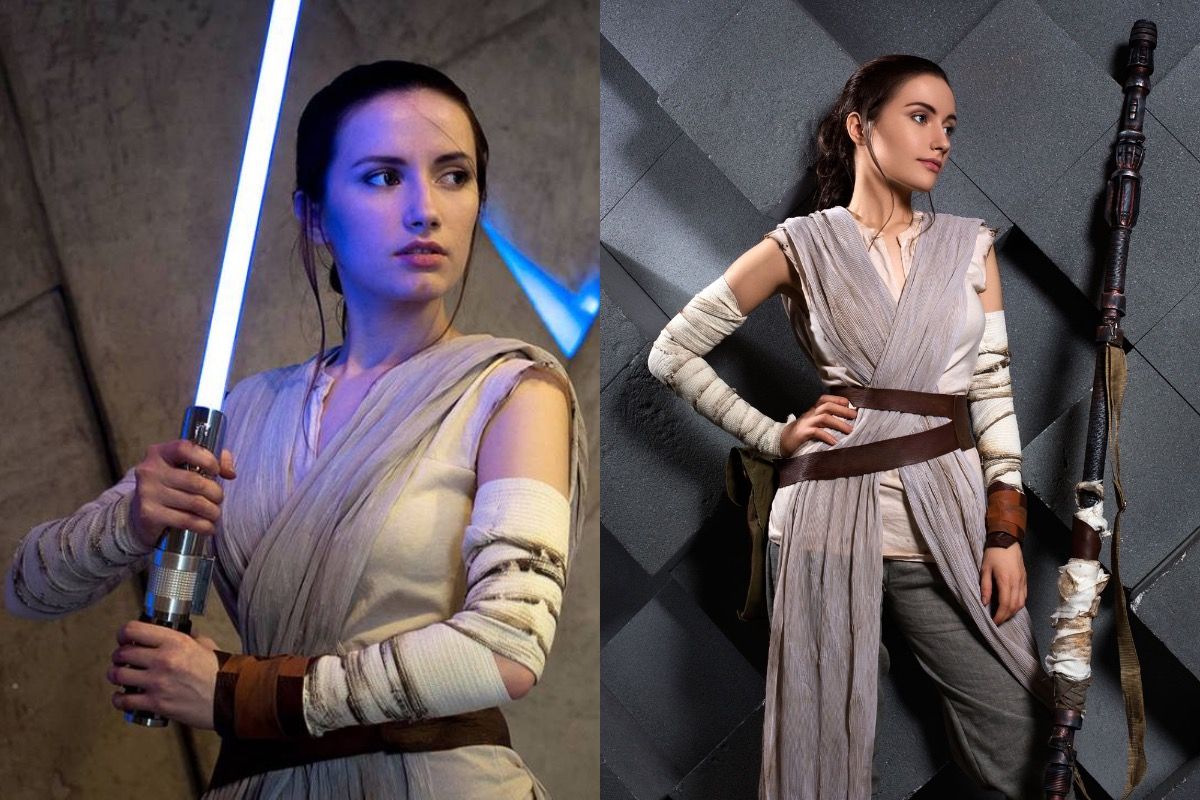 Two of the most recent additions to the Star Wars canon, The Force Awakens and The Last Jedi, have inspired slews of cosplays, and Rey has quickly become one of the most popular characters for people to cosplay as. Pulling together the materials for her outfit isn’t hard, exactly, but getting the details of the rips in her sleeves and the color of the materials isn’t easy.

Narga does a great job with those details, and with the two different weapons Rey carries in the movies. They’re so well-done, they look like they could be officially licensed, and the backdrop she chose for these photos just adds to that energy. The left could be Jakku and the right could be onboard any ship in the franchise. It’s an impressive cosplay. 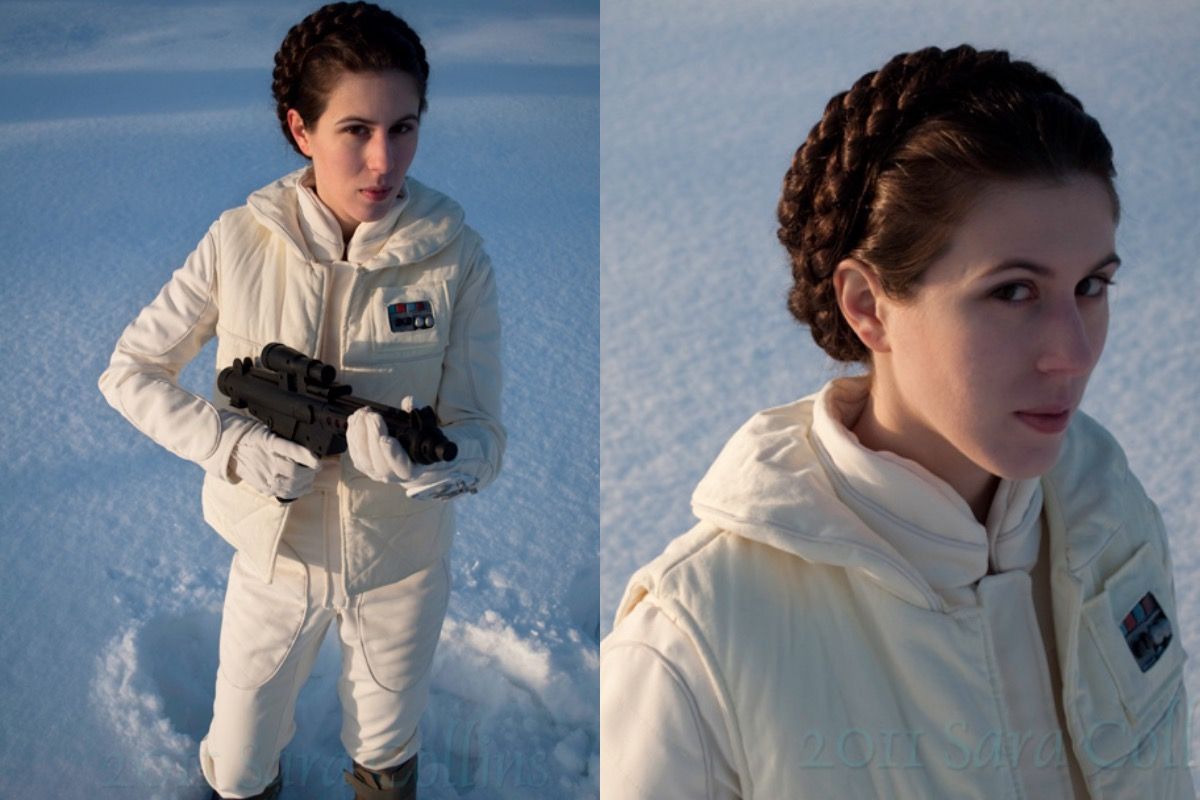 One more Leia Organa cosplay for good luck. Most cosplayers (and fans in general) focus on Leia’s time as a princess, dressing in the gold bikini or the white robes (both pictured above). And those are certainly fun outfits–and very easily recognizable ones. But every once in awhile, someone remembers that the young princess who was kidnapped by Jabba the Hutt grew up to be a powerful and commanding general who ran the entire resistance alongside her twin brother. This cosplay by thatbloodypirate is from that time, after she married Han, gave up the throne, and became General Organa, who fought for freedom in the galaxy. This may not be the most recognizable of the outfits Carrie Fisher wore in the franchise, but it’s a perfect tribute to the woman who continued to save herself as well as millions of others.