Sinnoh Champion Cynthia has one of the strongest teams players have ever seen in the main series games. Certain Pokémon can help players defeat her.

You Are Reading :10 Best Pokémon You Can Play To Beat Cynthia In Brilliant Diamond and Shining Pearl 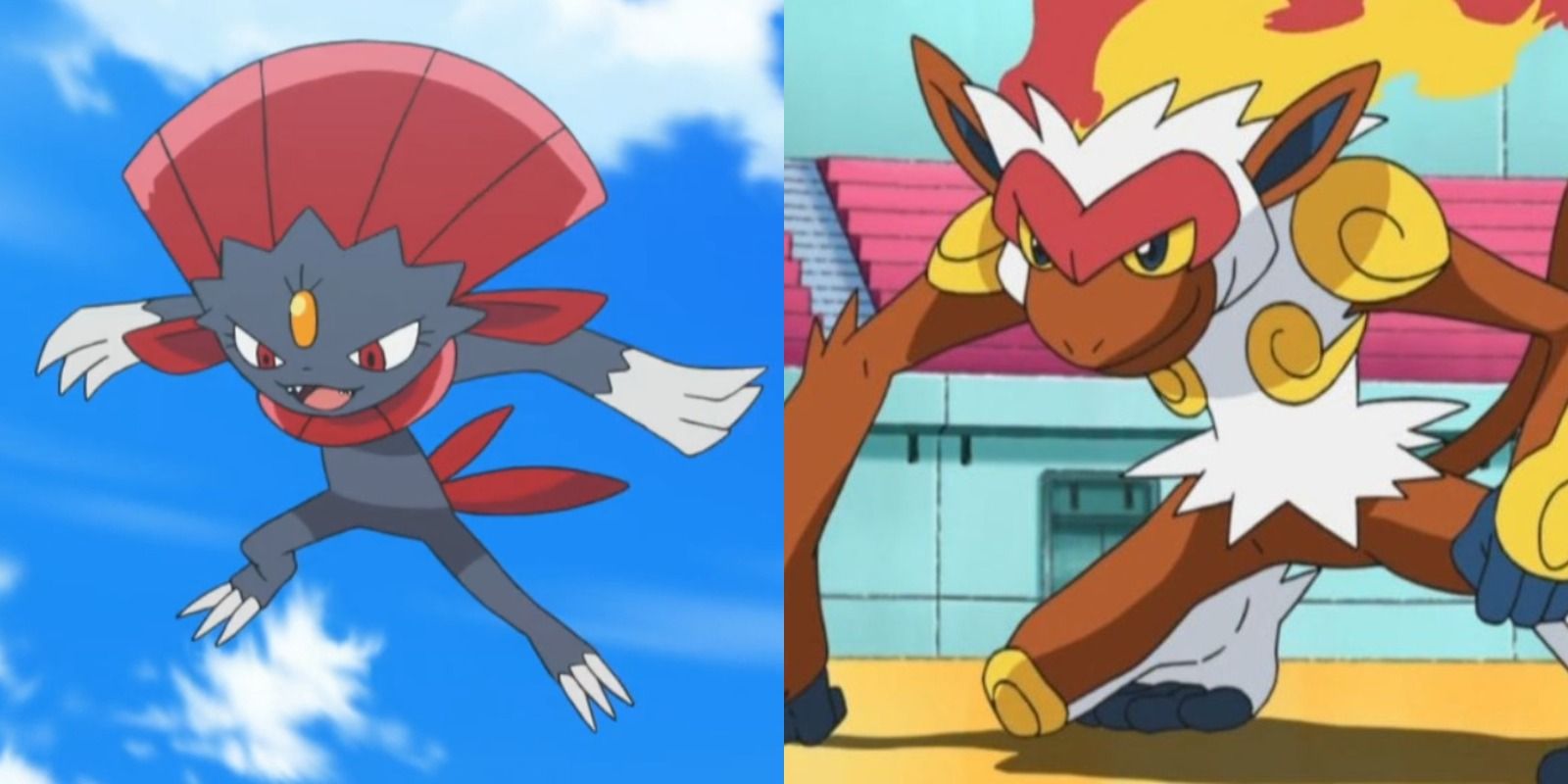 Pokémon: Brilliant Diamond & Shining Pearl were highly anticipated titles for several reasons. This updated exploration of the Sinnoh region offers a plethora of Pocket Monsters to catch, a fascinating story to progress through, and some battles that tend to be more challenging than what players are used to from more recent additions to the Pokémon franchise.

In the original Sinnoh games, Champion Cynthia is an intimidating presence because of her stellar team of Pokémon. In the remakes, she is perhaps even more terrifying because of her team’s better held items, viable Abilities, and superior move sets. Players have options, though, that can help them to defeat Cynthia and claim their title as the new Champion of the Sinnoh region. While the Legendary Pokémon of the region are obvious choices due to their high base stat totals, there are other strong Pocket Monsters that players can utilize to challenge Cynthia. 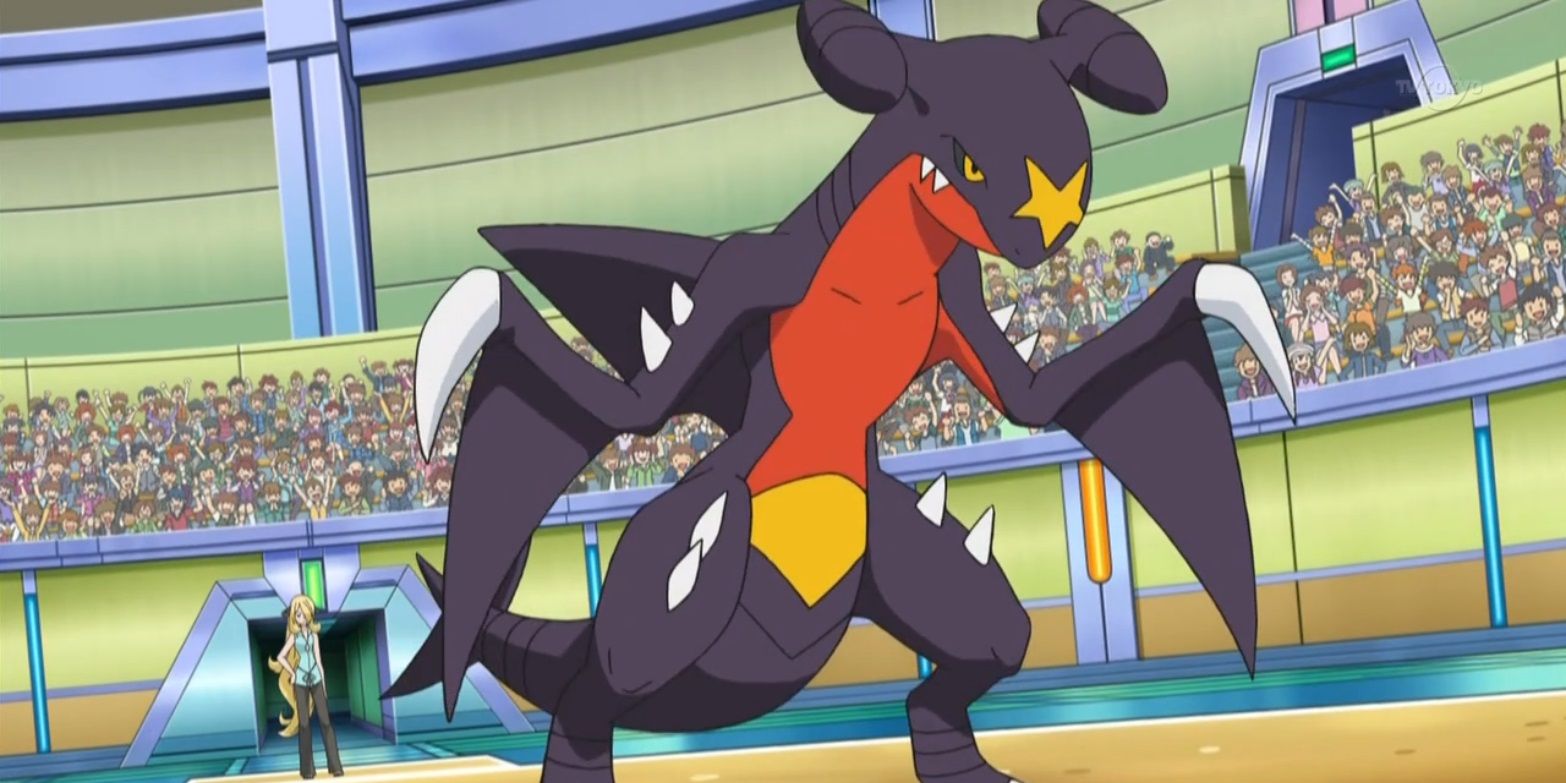 The pseudo-Legendary of the Sinnoh region is Cynthia’s ace Pokémon for a reason. Fast and with a fantastic Attack stat, Garchomp can do massive damage to opponents. Against Cynthia’s team, Garchomp has super-effective attacks with a Same Type Attack Bonus against Lucario and Cynthia’s Garchomp.

Garchomp is also viable against other members of Cynthia’s team simply because of its incredible strength. For example, it can deal a neutrally damaging Earthquake against Roserade, and because Garchomp should be faster if it is at a reasonable level and has been in a player’s party for a while, it should be able to eliminate Roserade in a single strike before the opponent can retaliate with a Dazzling Gleam. 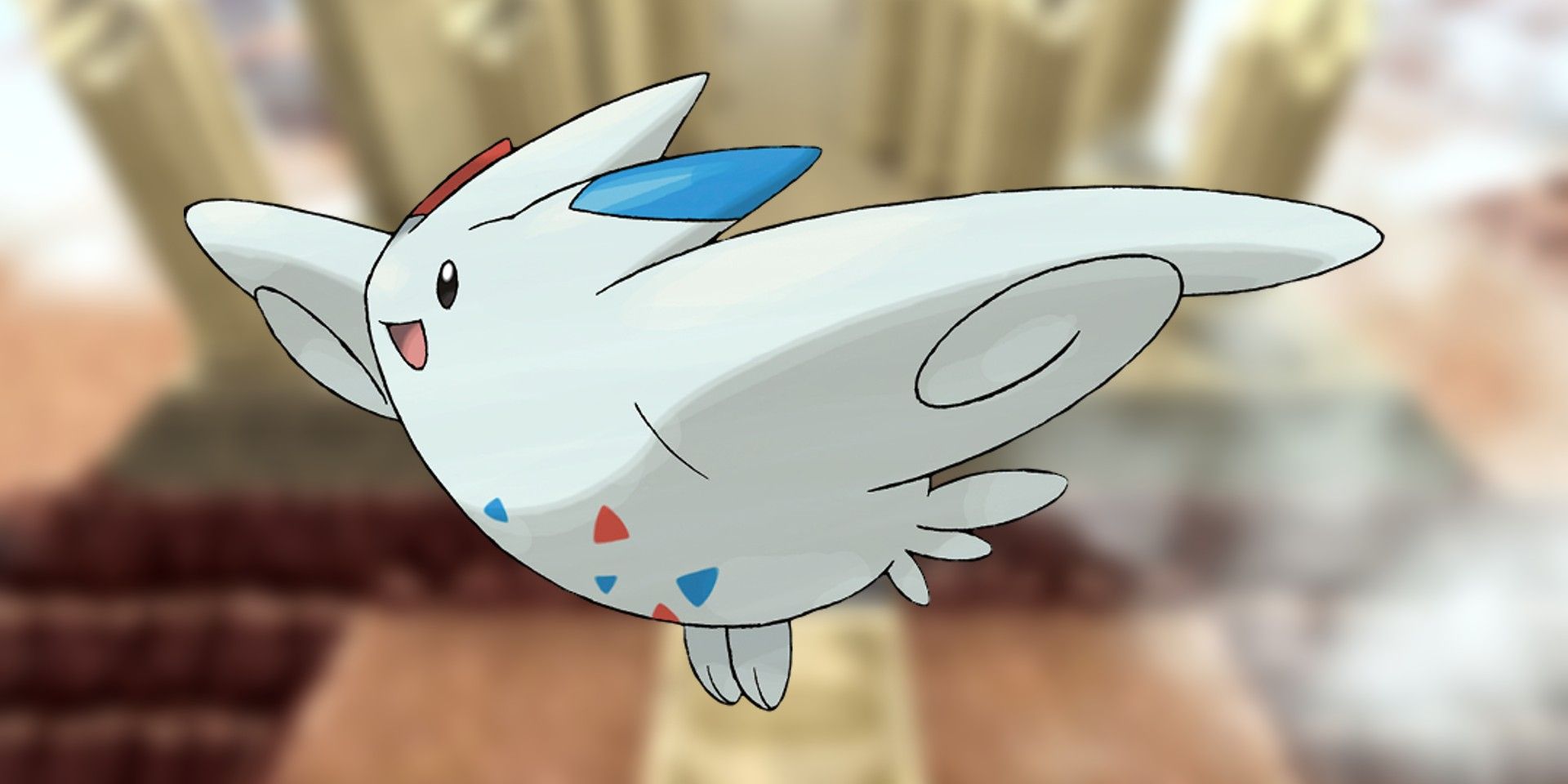 Though not a part of the Sinnoh Pokédex, Togepi is available in the Grand Underground throughout the game, giving trainers access to one of the best dual-type Fairy Pokémon once it evolves. Cynthia’s lead team member is her Spiritomb, a Ghost/Dark-type whose only weakness is Fairy.

The Fairy/Flying-type Togekiss also serves as a counter to Cynthia’s terrifying Garchomp, though the opponent’s access to Poison Jab can be concerning. Because of its reasonable bulk, Togekiss can likely withstand a hit if it is at a high enough level, and if trainers are willing to use a Dazzling Gleam TM on it, Togekiss can be an invaluable resource. It can also be helpful with Air Slash against Roserade, but Roserade’s access to Sludge Bomb may eliminate Togekiss before it has the chance to use it. 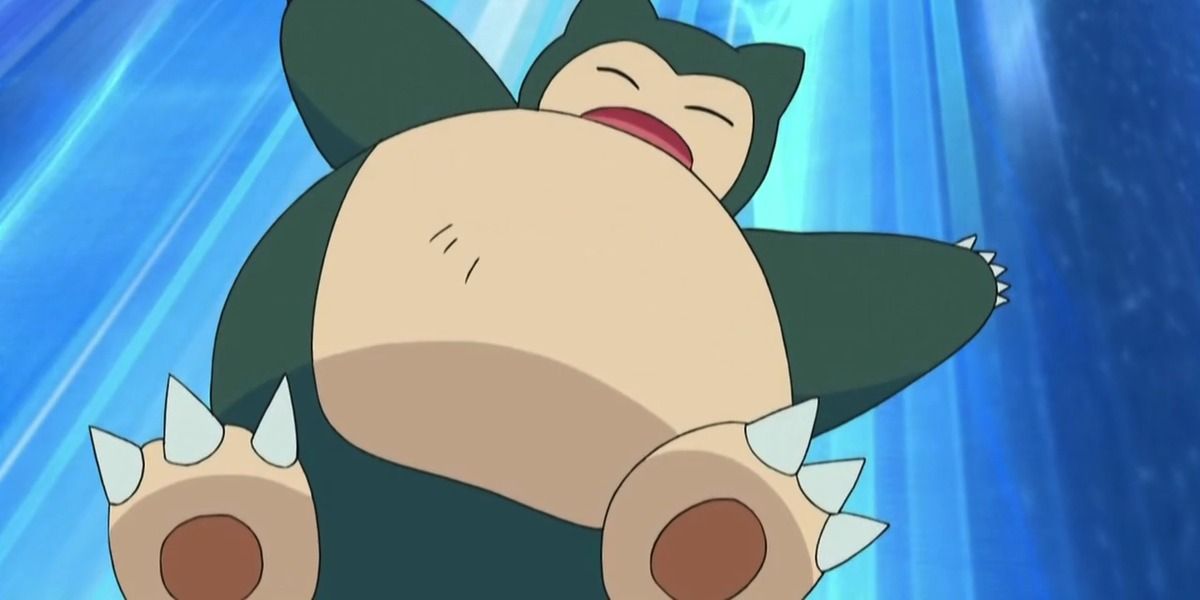 Normal typing has its ups and downs, but it benefits Snorlax against Cynthia’s team because of the lack of Fighting-type moves on her Pokémon. The only attack of this type is Lucario’s Aura Sphere, but this is a Special move, the category that Snorlax specializes in defending against. Additionally, Cynthia’s Milotic only uses attacks of the Special category, so Snorlax can help to deal with it.

Snorlax also has a high Attack stat and a sizable move pool, so it can utilize many attacks to counter Cynthia’s team. It does not take Physical attacks as well, which can present problems against Cynthia’s Garchomp, but its massive HP stat can help it to take a large amount of damage before it goes down. It is now much easier to obtain a Snorlax in Sinnoh because of Munchlax’s inclusion in the Grand Underground. 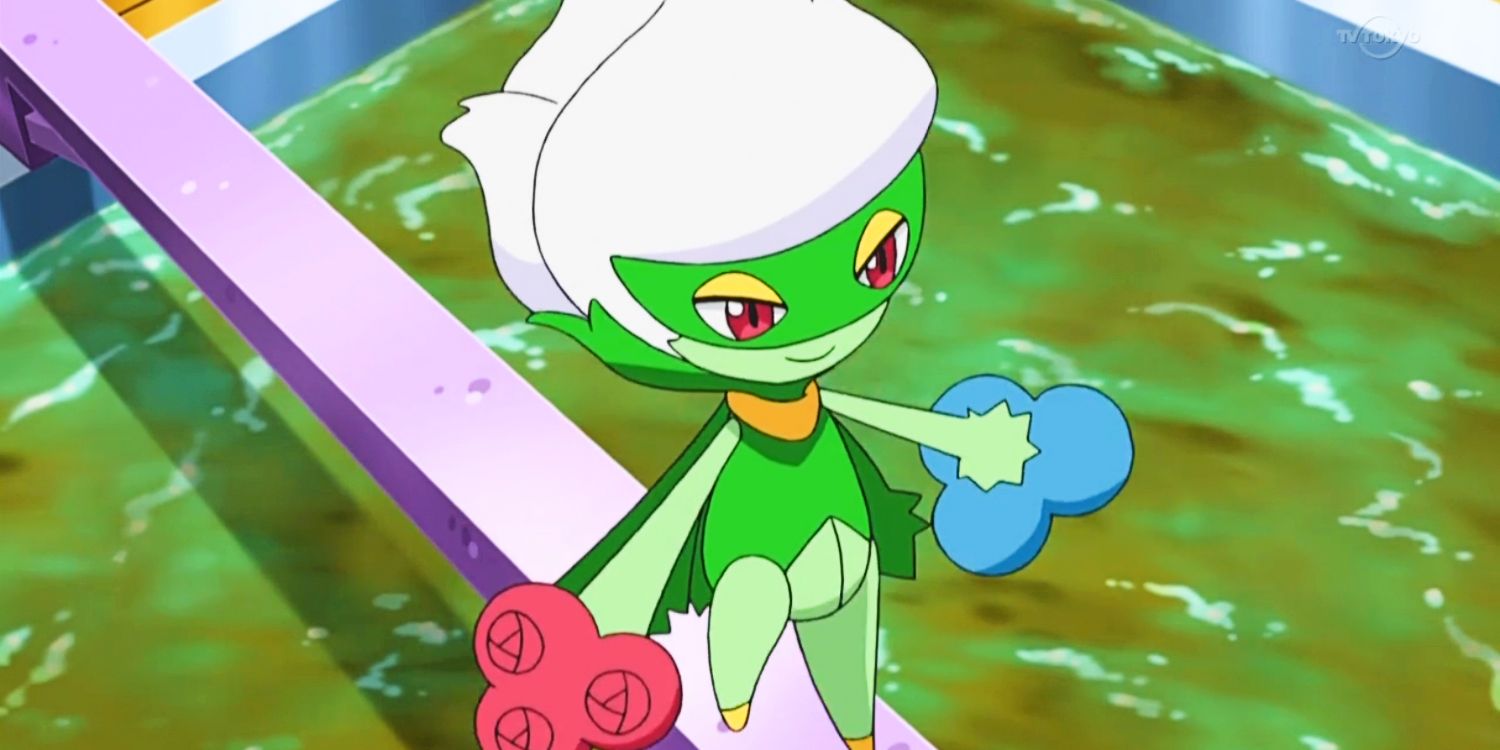 One of the best evolutions added in a later generation, the Grass/Poison-type Roserade can dramatically help a player against members of Cynthia’s team. One of her most frustrating Pokémon is her Milotic, which holds a Flame Orb and has the Ability Marvel Scale, boosting its Defense when it has a status condition. As a Special attacker, Roserade is unaffected by this Ability, letting it use its powerful Special Grass moves to devastating effect.

The only problem is that Milotic also has access to Ice Beam and Mirror Coat. While Roserade can likely withstand a hit from the former, Mirror Coat can be troubling because of the attack’s reflective nature. Roserade can, however, do substantial damage against Milotic in a way few other Pokémon can. It also serves as an excellent counter to her Gastrodon, out-speeding it and dealing four-times damage to it with Grass-type attacks before it can retaliate. 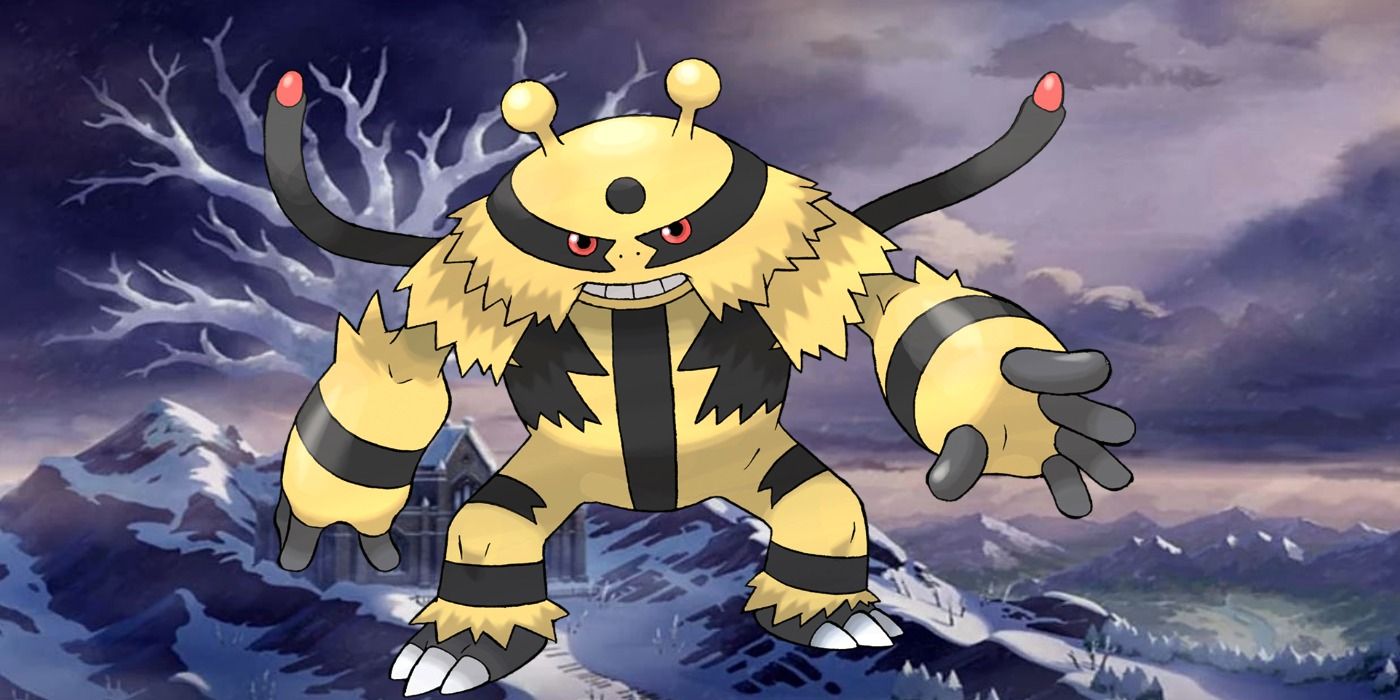 Elekid is only available in the Grand Underground in Brilliant Diamond, but its final evolution is incredibly viable if players can acquire one. Its base Speed is higher than that of both Lucario and Roserade, but trainers will have to EV train it to make sure it stays that way against their improved stats on Cynthia’s team.

Through TMs, Electivire can access a multitude of different Physical moves of various types that utilize its high Attack stat. Because of this, Electivire can likely eliminate Roserade because the enemy has a low Defense stat, and it can defeat Lucario with a powerful super-effective strike. Additionally, it can deal a significant amount of damage to Milotic, despite Marvel Scale reducing the damage against it. 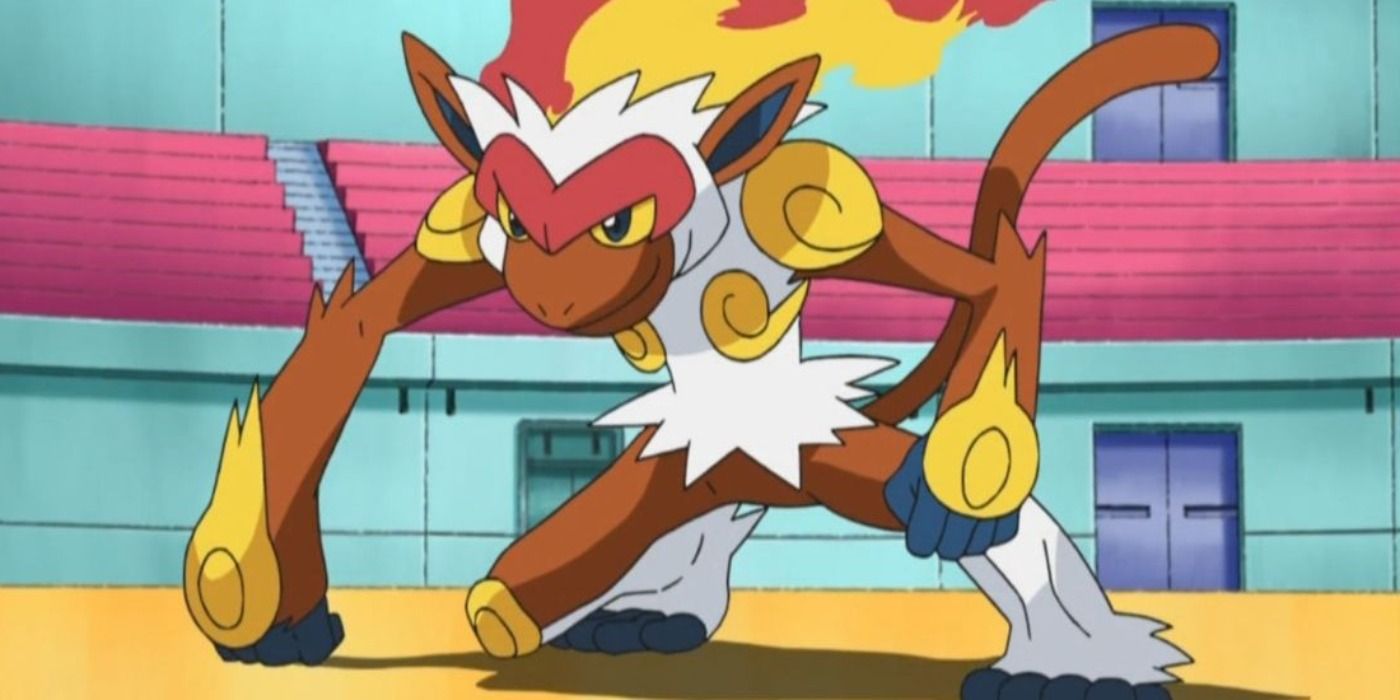 Chimchar is often considered the best starter Pokémon from the fourth generation, and its relevance in the eighth generation continues to impress. Its final evolution, Infernape, is a fantastic option to use against Cynthia’s Roserade and Lucario.

The Fire/Fighting-type does not take super-effective damage from any of their attacks, and it has a higher base Speed stat than both of them. Infernape is not incredibly bulky, but the equally high values in its Attack and Special Attack make it an offensive force in either category. 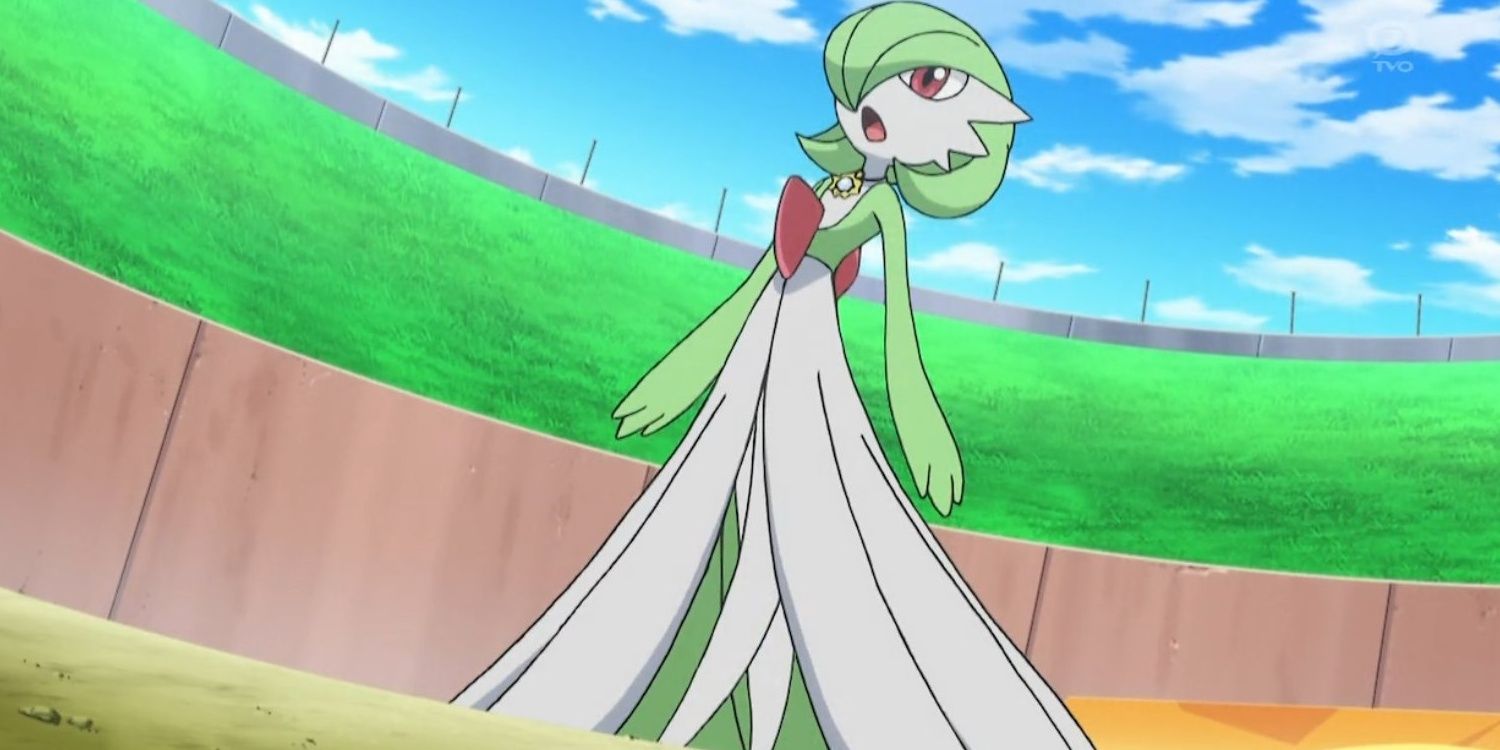 As a Psychic/Fairy-type, Gardevoir has access to Fairy attacks with a Same Type Attack Bonus, which can devastate Spiritomb. Though Sucker Punch can be concerning, it is usually not enough to take Gardevoir down in a single hit, allowing it the chance to use its high Special Attack stat. It is also faster than Gastrodon, and even if it cannot knock it out in one strike, Gardevoir can do a substantial amount of damage.

Also, Gardevoir’s Special Defense is more than capable and allows it to make up a bit for its mediocre HP stat. As such, it is a toss-up whether or not it can survive a hit from Roserade’s Shadow Ball or Sludge Bomb, but if it can, it can return with a terrifying Psychic-type attack. 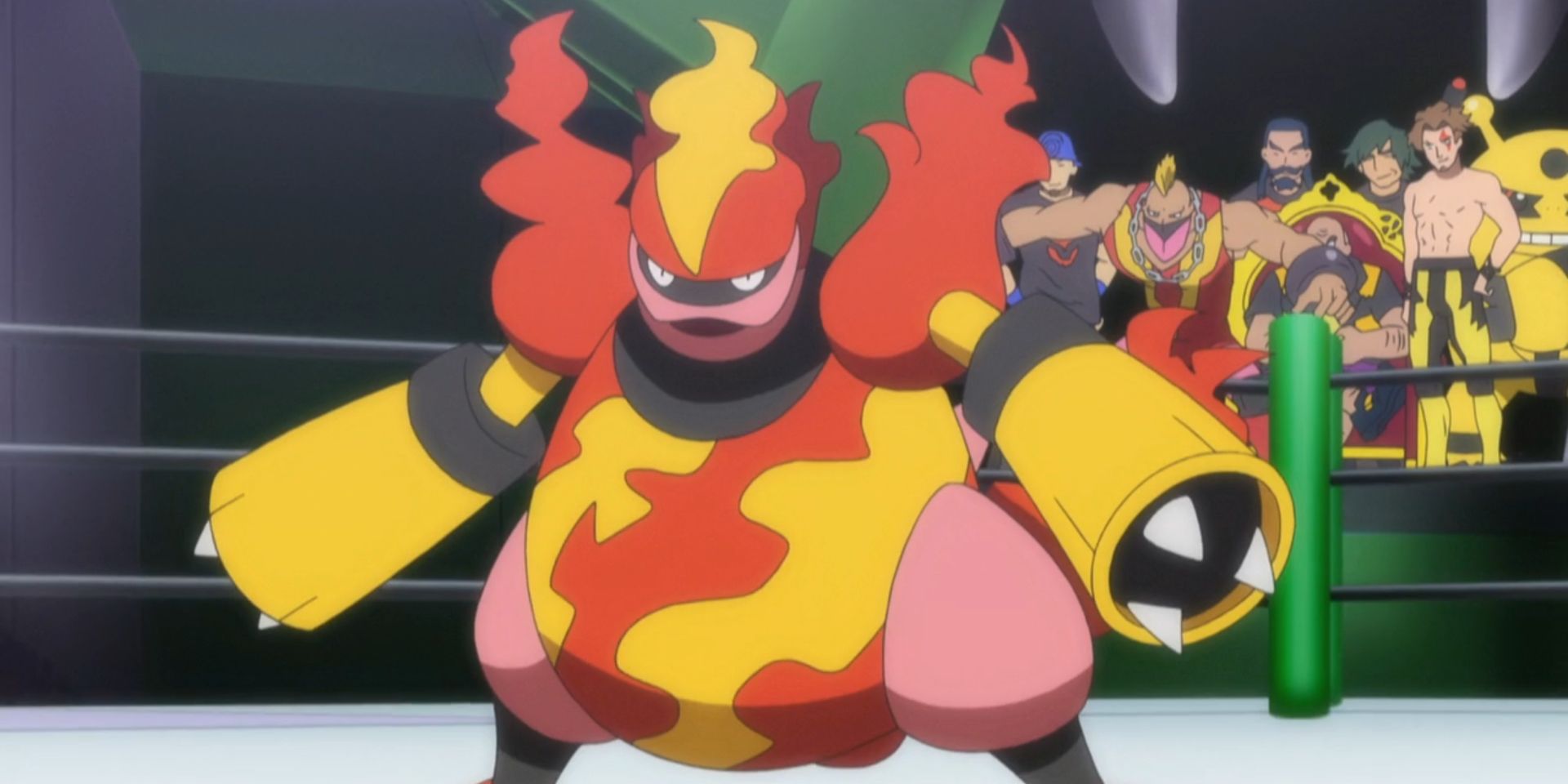 With a high Special Attack stat and pure Fire typing, Magmortar is a viable choice against Roserade and Lucario. Though Magmortar’s defensive stats are not exceptional, it can take a decent chunk of damage from Special attacks, which are the only attacks that Roserade and Lucario have. This capability is helpful because it likely will not out-speed these two.

Additionally, while Spiritomb has Sucker Punch, a Physical attack, Magmortar’s Defense stat is high enough to deal with that damage and let it retaliate with a terrifying strike. Spiritomb’s other three attacks are all Special, so Magmortar has less trouble surrounding those. Magby is only available in the Grand Underground in Shining Pearl, but trading can give Brilliant Diamond players a fantastic team member. 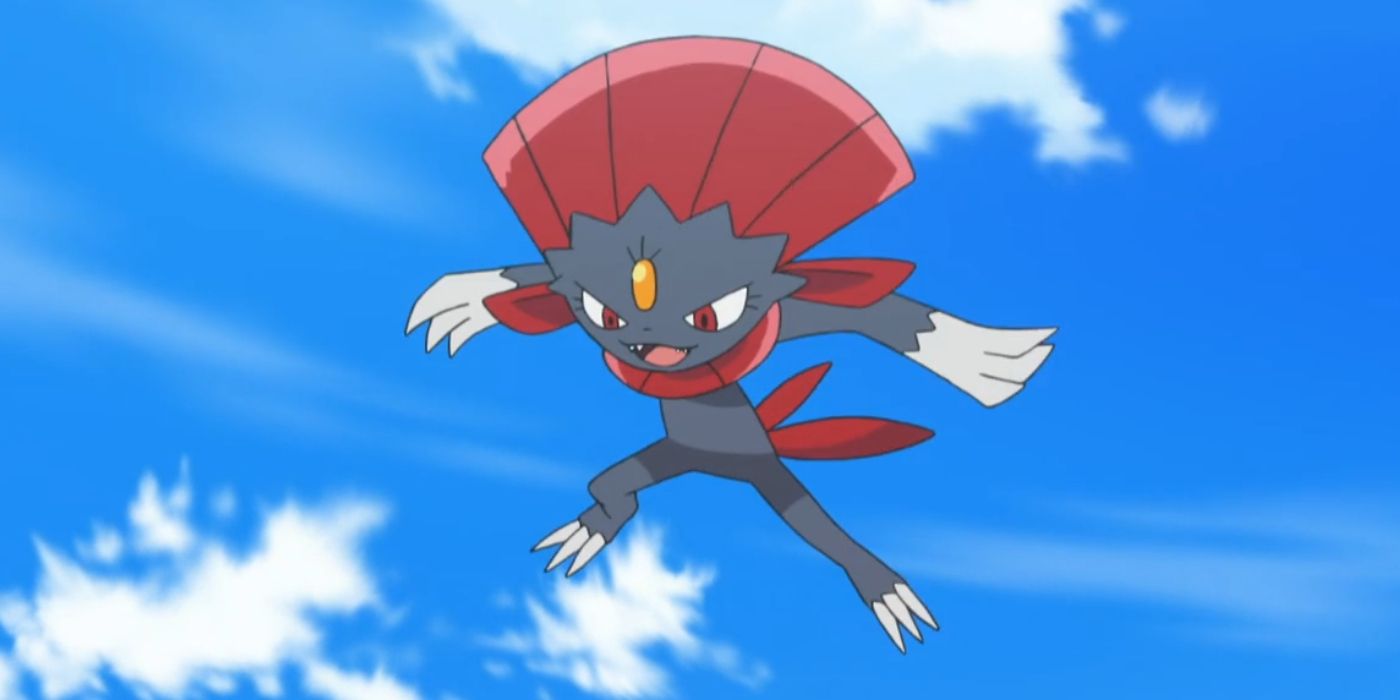 One of the best glass cannons in Pokémon, Weavile is incredibly fast and able to strike with great force using its Attack stat. These stats are extremely helpful because Cynthia’s Garchomp is known for its Speed stat.

That being said, trainers will have to EV train Weavile or dramatically over-level it to reach the same Speed stat as Garchomp, but it is worth it. A powerful Ice attack can deal significant damage to the pseudo-Legendary, even with the Yache Berry it holds. Weavile is also viable against Roserade because of the latter’s Grass/Poison typing. 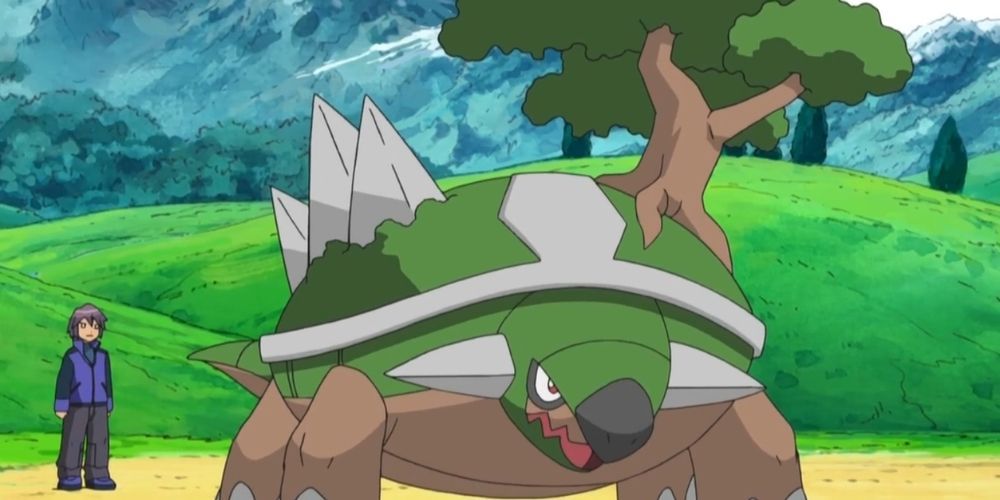 The fully evolved version of Turtwig, Torterra is a bulky Pokémon that sacrifices its Speed for more strength. It can easily take care of Gastrodon, and it can withstand an attack from Lucario before striking back with a destructive Ground-type blow.

Against Roserade, it should be able to survive one Sludge Bomb because of its bulk and then deal neutral, but powerful, damage against it. Torterra is unlikely to survive an Ice Beam from Cynthia’s Milotic, but if it can, it can then deal a massive blow with a Physical Grass-type attack.