15 Best Documentaries About The Music Industry (According To Rotten Tomatoes)

15 Best Documentaries About The Music Industry (According To Rotten Tomatoes)

Rotten Tomatoes ranks the best music industry-focused documentary films, including Gimme Shelter, It Might Get Loud, and many other inspiring films.

You Are Reading :15 Best Documentaries About The Music Industry (According To Rotten Tomatoes) 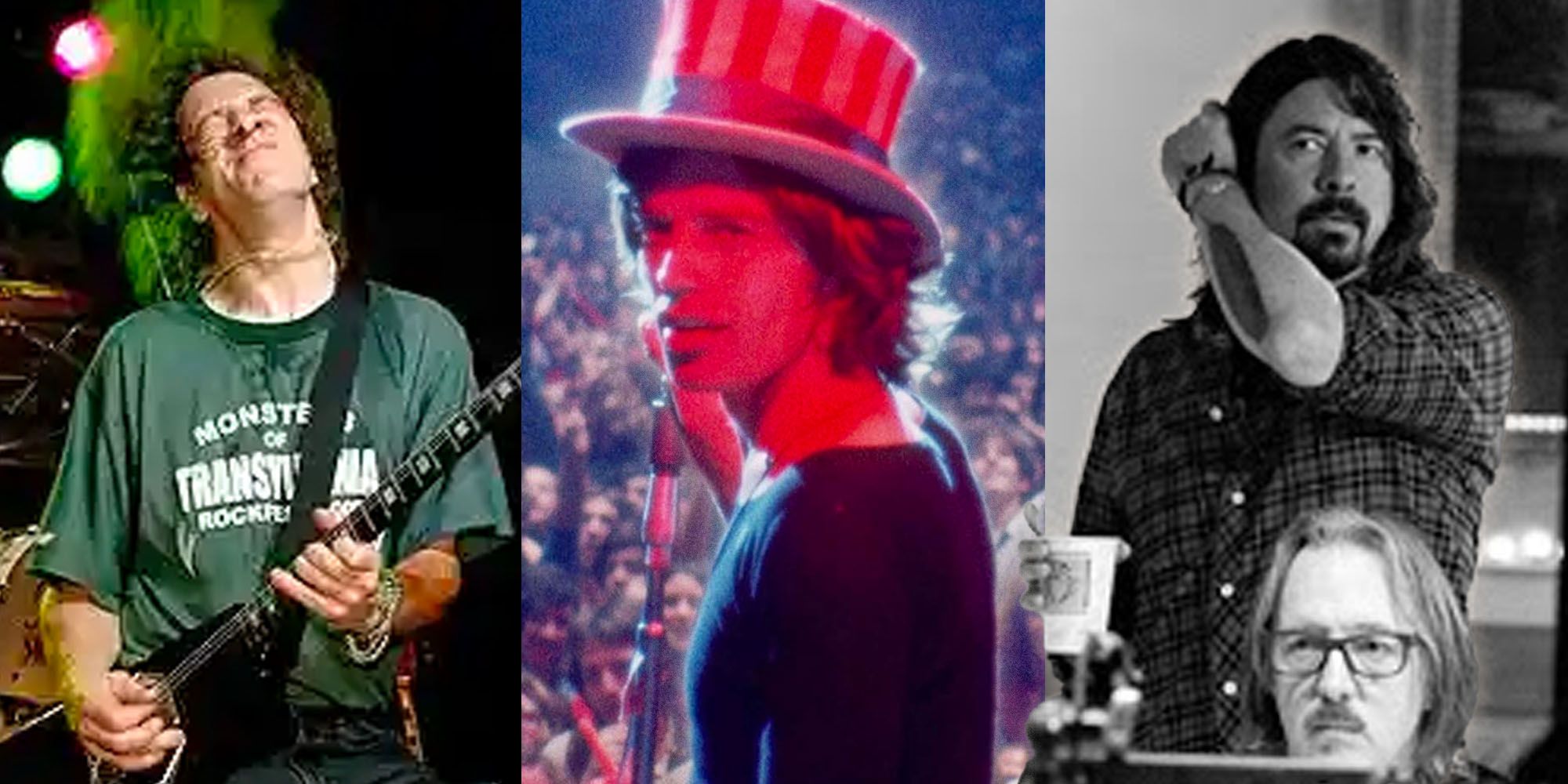 As important and prevalent as music is in our daily lives, the industry that produces it is something of a vast enigma. Ever since television first came into the American home, there have been musical documentaries about individual artists, concert tours, forgotten bands, and general insights into the day-to-day grind of being a professional musician.

Though the dramatic renderings of stories about the music industry, especially the popular musical biopic subgenre, generally get more attention than the documentary format, there is still an innumerable amount of amazing docs out there on the subject.

Updated on May 3rd, 2021 by Kristen Palamara: While there are countless biographies about bands or musicians, both written books and put to the screen, there are also several documentaries about the music industry in general that focus on a particular time period of the music scene or a particular genre of music. These documentaries are just as engaging as the more specific biographies or musical biopics and have high ratings as well. Here are the best documentaries that delve into the behind-the-scenes of the music industry according to Rotten Tomato scores. 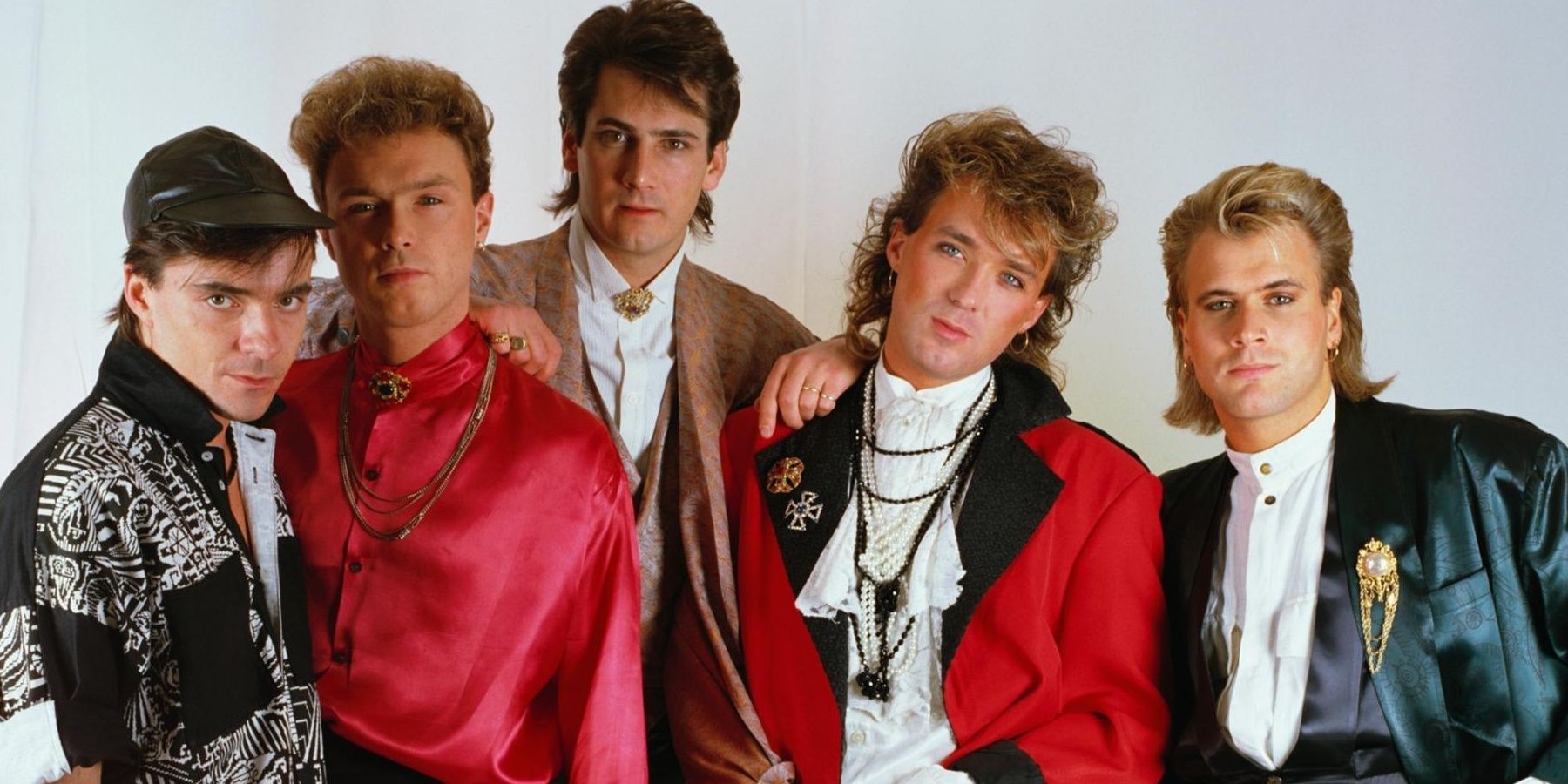 This documentary focuses on the English 1980s band Spandau Ballet, but also looks at their impact on England at the time. It shows the pop band’s rise, fall, and reunion.

It focuses on one particular gathering of fans in London that helped shape the future of English fashion and music and had an even larger impact on the rest of the world and helped garner in the New Romantic scene. 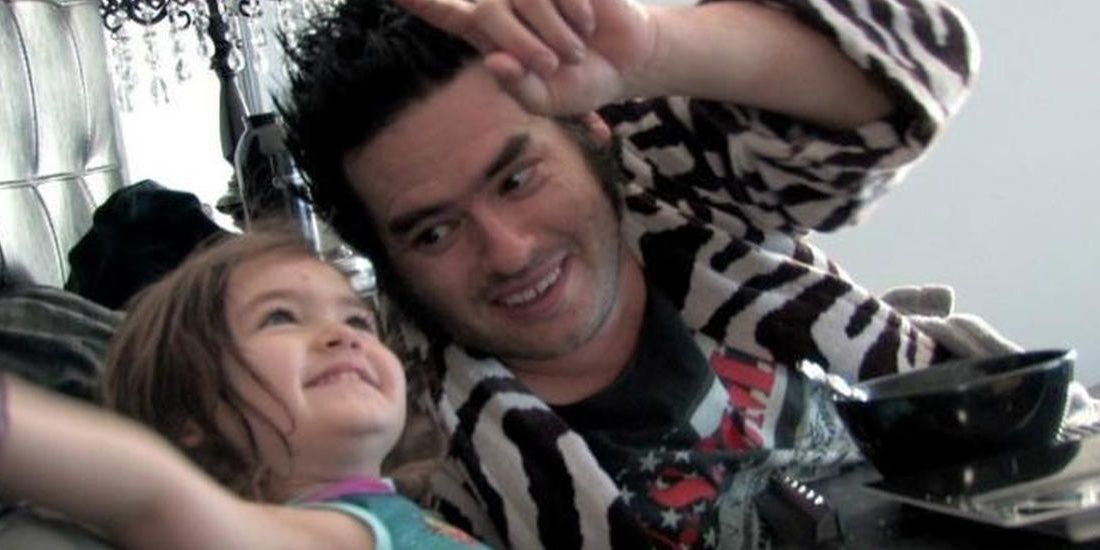 The Other F Word checks in with some prominent punk rock musicians who started their careers in the 1980s. The movie jumps between their early work on stage, later years performing, and home video of them parenting their kids.

The movie emphasizes how these punk rockers have transitioned into parenthood from their anti-establishment rocker days. It’s an interesting approach to a documentary that shows the entire musician instead of just their stage presence. 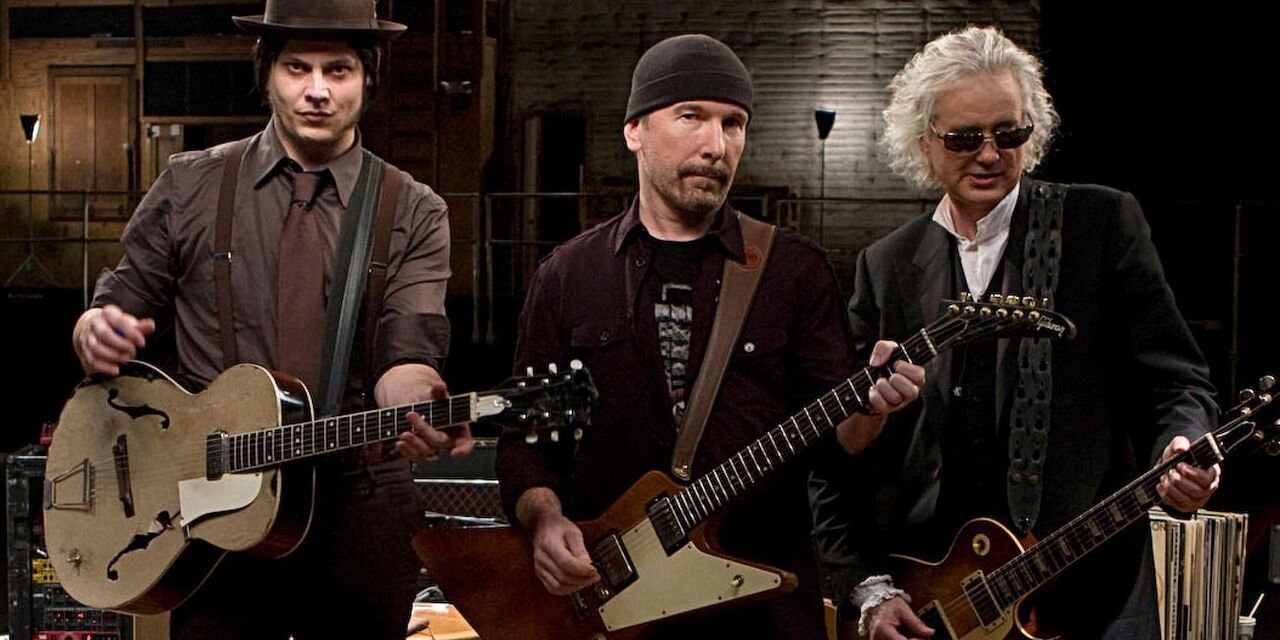 It Might Get Loud is a unique spin on the musical documentary format. The closest thing to a guitarist version of The Avengers, the film brings together three of the best living guitarists for a conversation on their careers, the art of their instrument, and the evolution of rock music as a whole.

As Jimmy Page, The Edge, and Jack White work their way around each other’s musical styles and compositions in the climax of the film, it is damn near impossible not to smile. 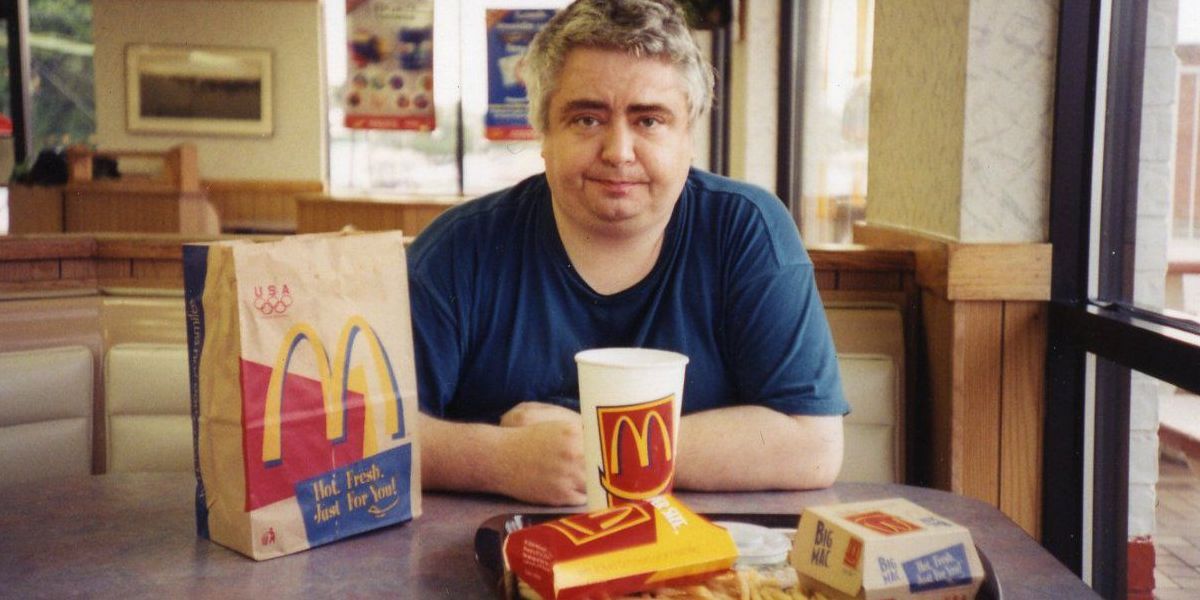 The late Daniel Johnston was a legendarily obscure musician that stuck to a DIY attitude throughout the entirety of his troubled life and career. This 2005 film by Jeff Feuerzeig documents the songwriter’s chronic struggles with bipolar disorder and depression. The film’s melancholic tone perfectly matches the subject’s musical works and the film illuminates the fascinating history of one of the industry’s greatest, and most tragic, outsider success stories.

Beneath the surface, however, the film is about the relationship between mental illness and artistic expression, and it examines this relationship in a profoundly unflinching way. 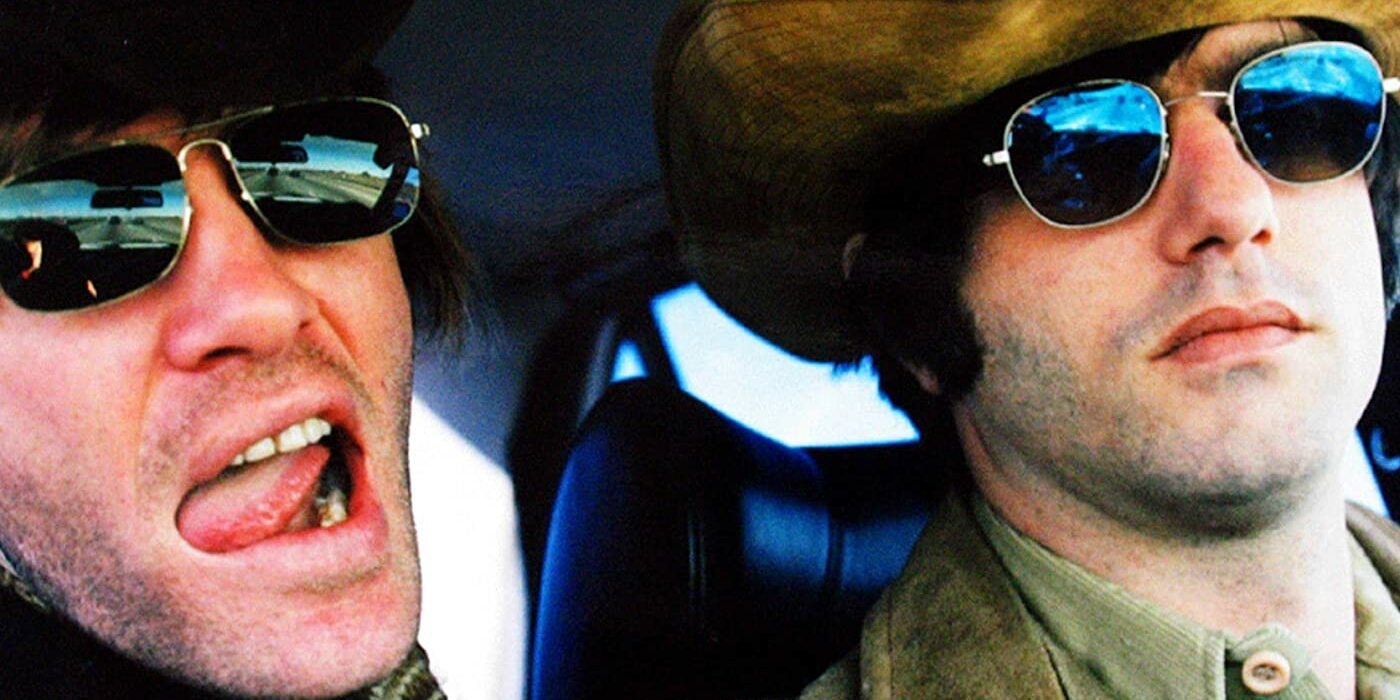 One of the most purely enjoyable formats of documentary filmmaking is the “see what they do with success” template. Films like Overnight and Exit Through the Gift Shop became indie-hits with the format, simulating the feeling of watching a train crash before the viewer’s eyes.

Though it did not receive the widespread recognition of the aforementioned films, Ondi Timoner’s 2004 film Dig! chronicles the brutal rivalry between the ambitious lead singers of two underground indie rock bands. As the bands begin to pick up steam, the two men begin to spiral into a toxic vortex of competition and ego. It’s a forgotten gem. 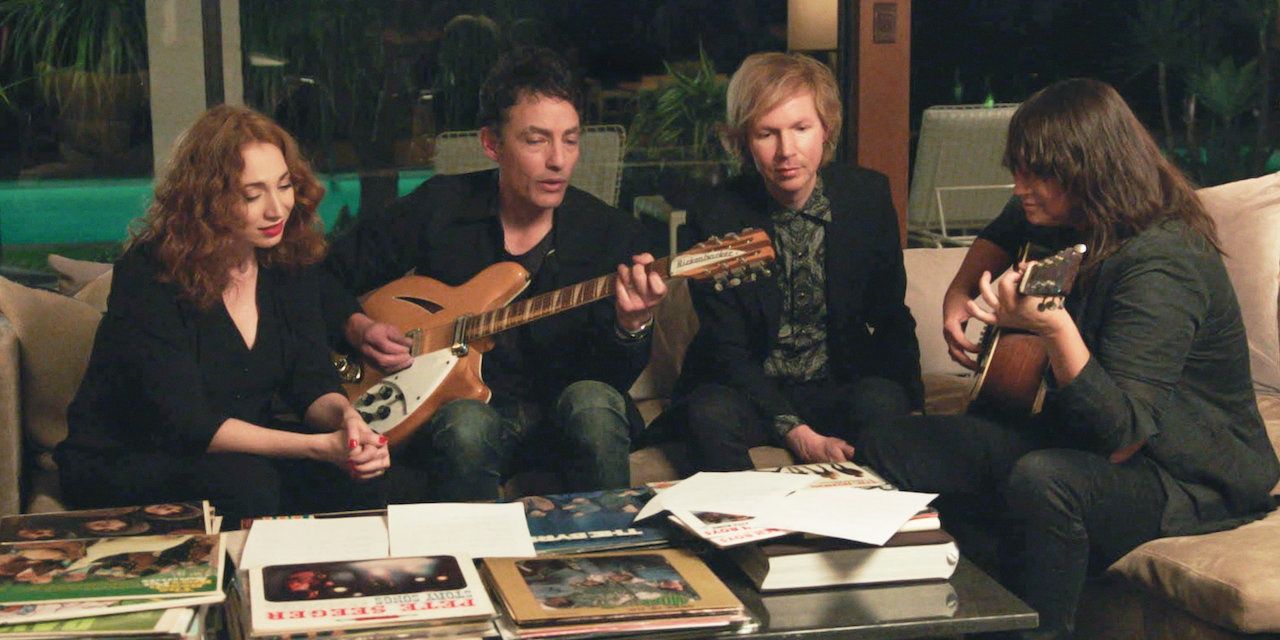 This documentary looks at several bands in the 1960s and 1970s and a movement referred to as the Laurel Canyon music scene and how these bands helped create and establish this type of genre of music.

The movie looks at bands including The Byrds, The Beach Boys, Buffalo Springfield, and The Mamas & the Papas and delves into their specific sound and how this sound affected the music industry and helped define the California Sound. 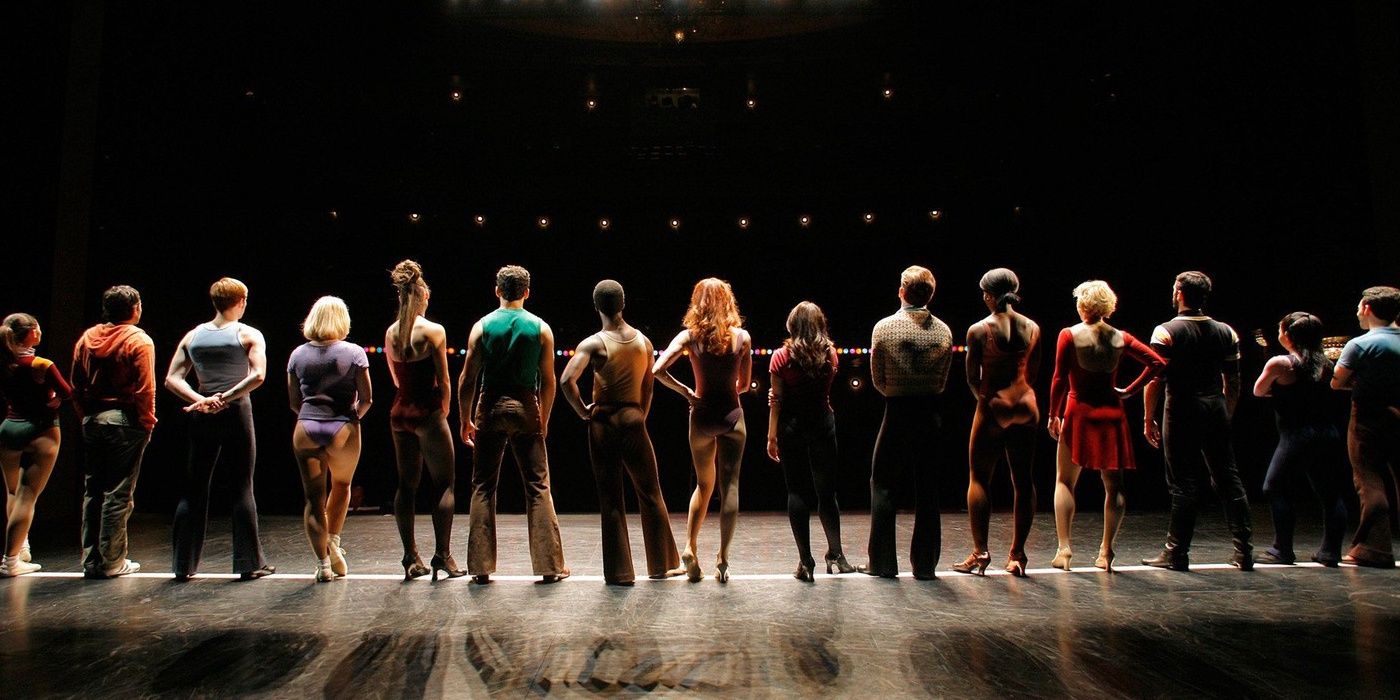 Every Little Step is a different type of music documentary as it focuses more on the world of theater and Broadway. It focuses on the iconic musical, A Chorus Line while comparing the original version with the recent revival.

The movie follows dancers struggling to make it into the final cut of the revival and get cast after grueling auditions while interspersing interviews with current, and past, cast and crew about the musical and Broadway life in general. 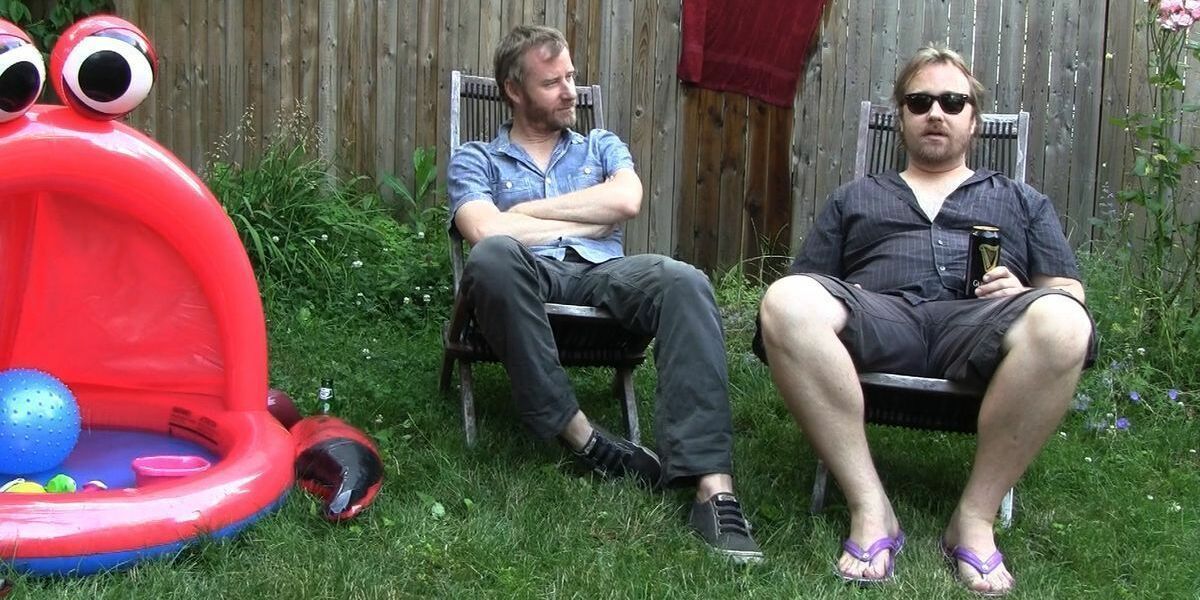 Critical darling band The National is one of modern music’s most unlikely subjects for a Christopher Guest-esque mockumentary treatment. Lead singer Matt Berninger’s younger brother directs the film, which chronicles the band’s process whilst on tour.

A film that reveals itself to be about the price of fame in relation to familial bonds, the film’s mixture of odd cringe humor and genuine moments of fraternal pathos make it one of the more unique tour docs to come out recently. Additionally, the usage of the band’s concert footage and music accompany the film’s material beautifully. 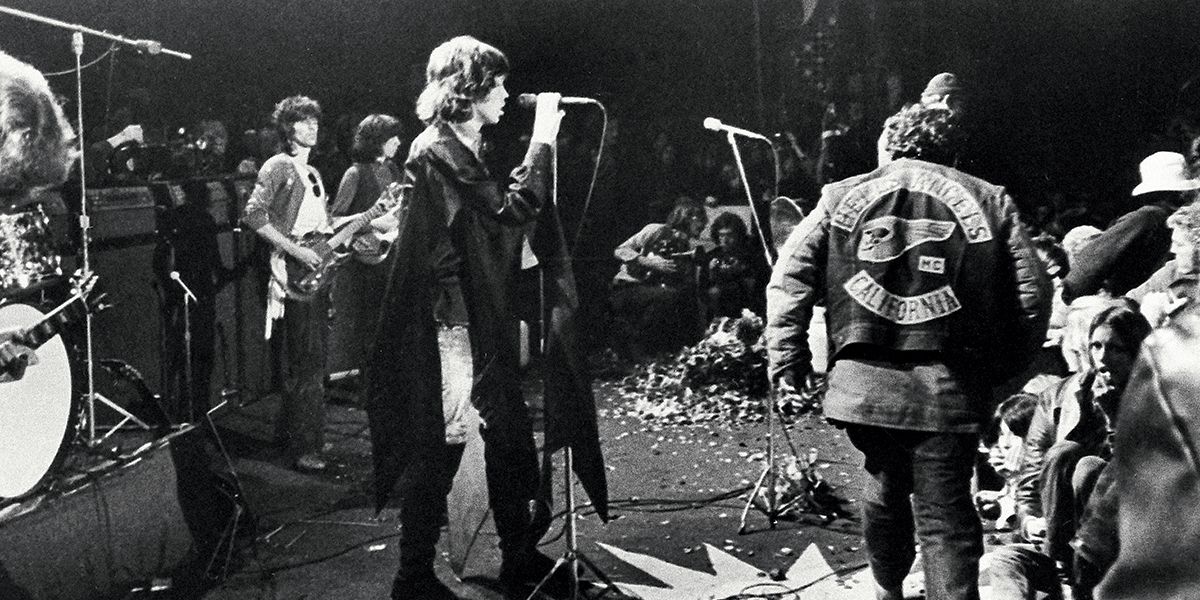 Technically Gimme Shelter is about The Rolling Stones. However, the film is actually a ticking suspense bomb about the death of ’60s counterculture, leading up to the infamous incident where a Rolling Stones concert led to four deaths, one by a biker gang hired to do security for the event.

A tragedy and almost real-time depiction of the movement’s implosion, Gimme Shelter serves as both a fascinating tour doc of one of the most famous bands at their peak and a damning time capsule of one of rock music’s biggest disasters. 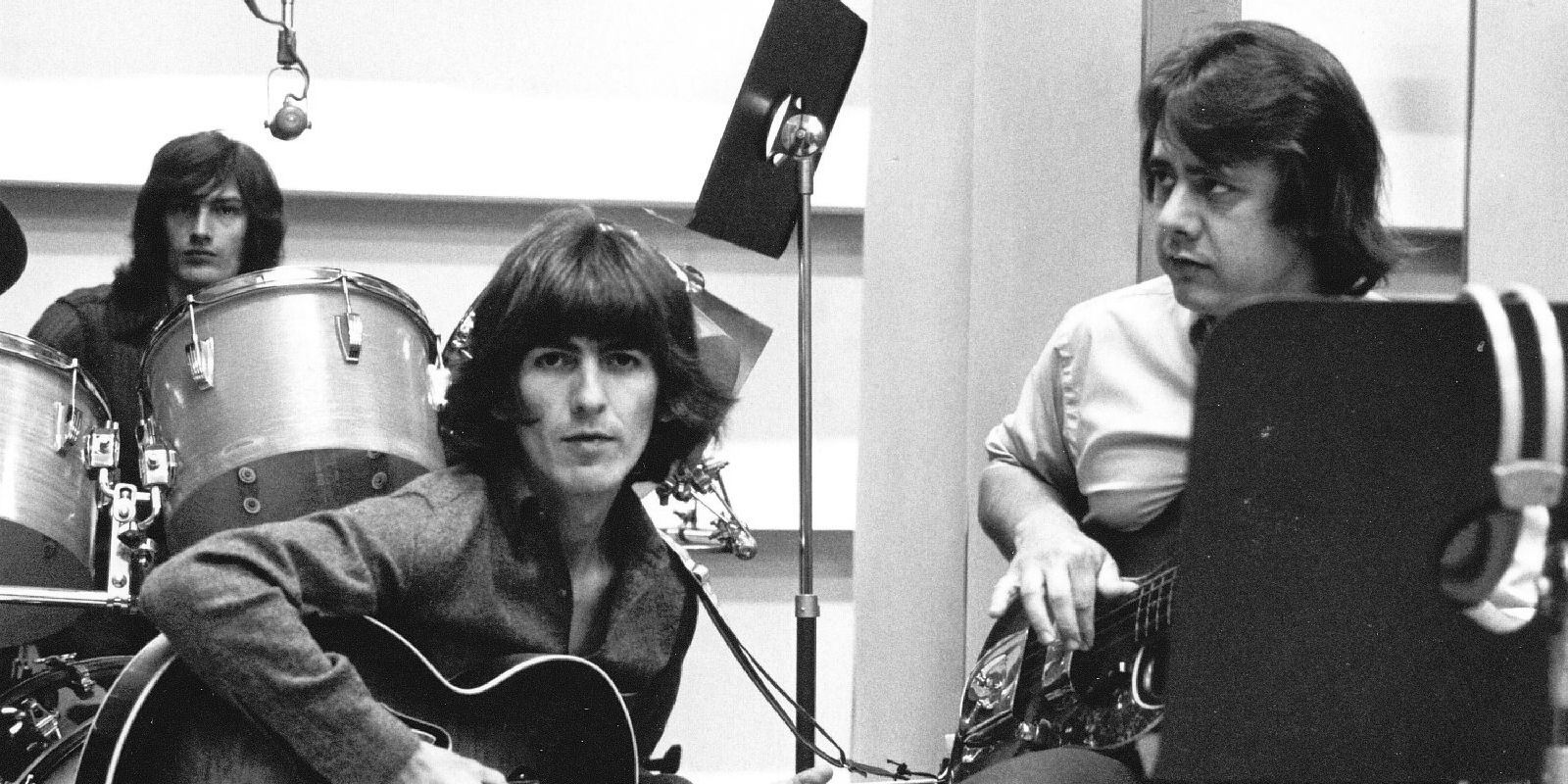 If you’ve ever heard “Good Vibrations” or “California Dreamin’,” amongst a bevy of other hits in the 60s and 70s, then you’ve heard the work of session musician powerhouses The Wrecking Crew. The film affectionately gives the legendary group their long-due time in the spotlight. Through interviews with group members and other relevant interviewees, the film tells the history of some of the era’s biggest hits and how they came to be.

Particularly interesting are the bits about working with Beach Boys eccentric Brian Wilson in his studio recording revolution period. The Wrecking Crew is a great peek behind the curtain. 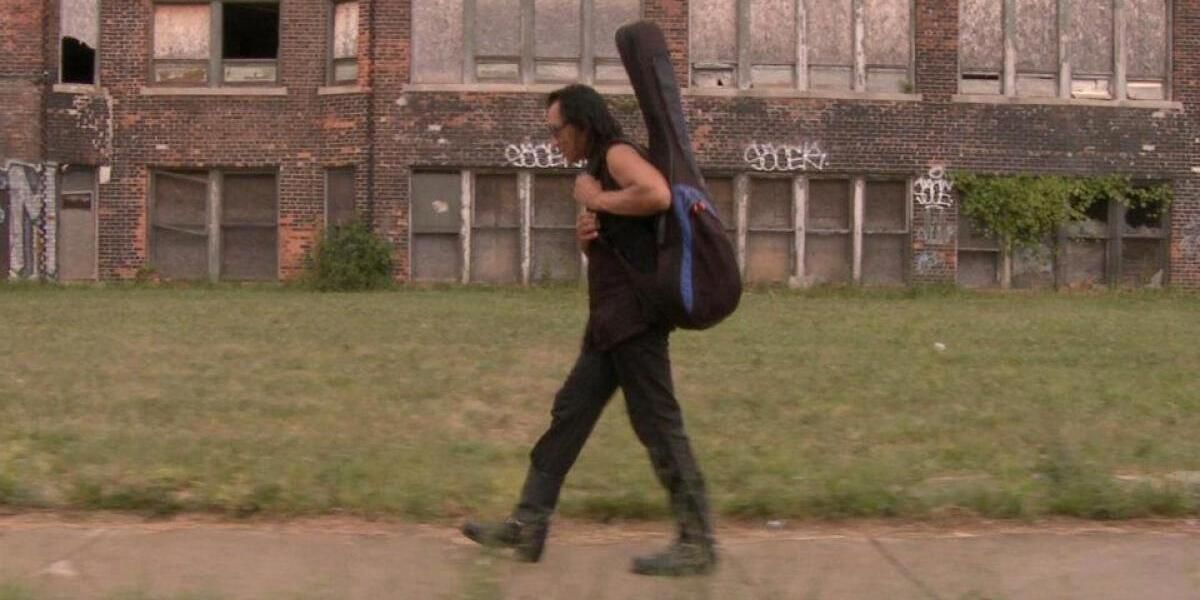 Part musical case study, part mystery, and part redemption story, Searching for Sugar Man is one of the most engaging and tightly wound musical documentaries out there.

Ostensibly the story of a would-be superstar who inexplicably faded from view entirely, until his only album began to accrue massive popularity in South Africa, the film traces the history of two fans of the mysterious singer Rodriguez as they unravel his ultimate fate. Fascinating, funny, and ultimately satisfying, the film is a great portrait of a terrific talent lost to time’s erosion. 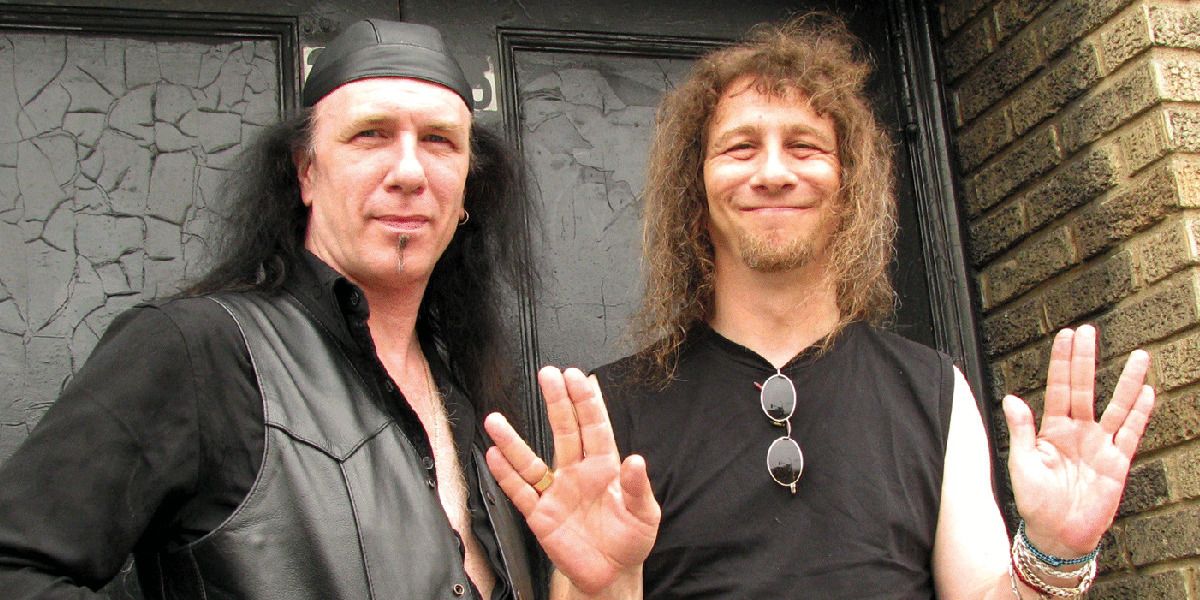 The best metal band nobody has ever heard of – that’s the basic opening pitch of Anvil! The Story of Anvil, a documentary about one of Canada’s early thrash pioneers, Anvil.

The sometimes-funny-sometimes-sad film follows the two remaining original Anvil members as they continue to try to hit it big in the face of growing pressures to give up the dream in favor of a comfortable life. The film’s satisfying concluding sequence is a triumphant call to never give up that never feels forced or saccharine in its messaging, making the film one of the most genuinely inspiring films for anyone seeking an unconventional path in life. 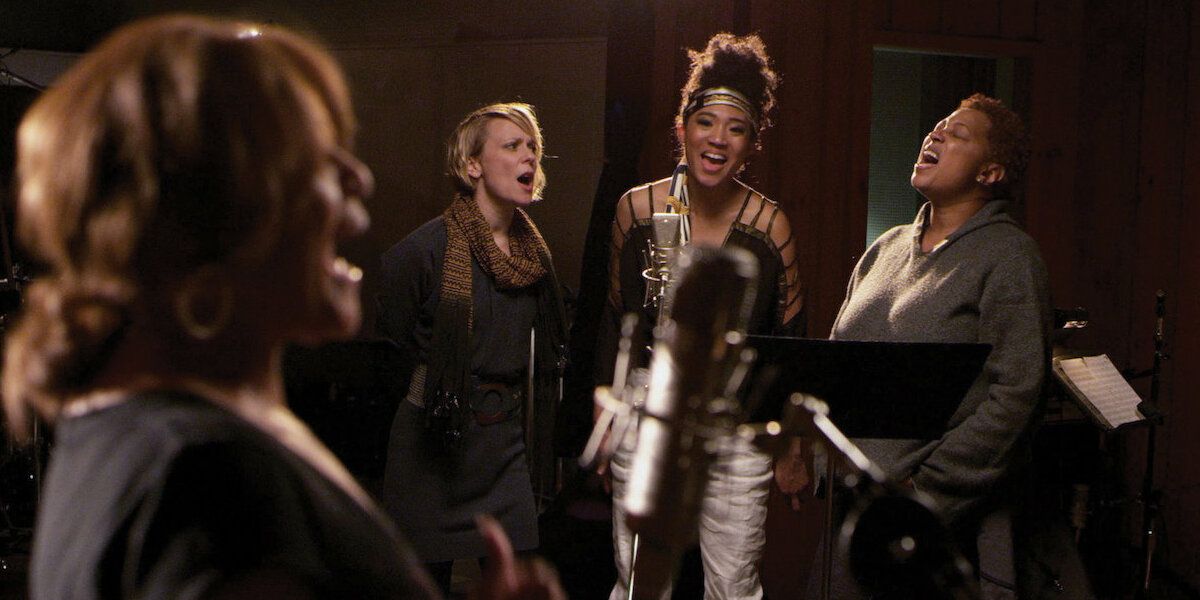 A heartwrenching look at the lives of uncredited backup singers, the film 20 Feet from Stardom is similar in many ways to The Wrecking Crew in its mission to give an oft-forgotten facet of the music industry their avenue to share their stories.

While the material could have ventured into the territory of being maudlin, the film’s authenticity never waivers, letting the backup singers being interviewed have the attention of the camera, allowing them to share their paths of passion and how they ended up in their particular positions. For anyone curious about the music industry, this is a must-see. 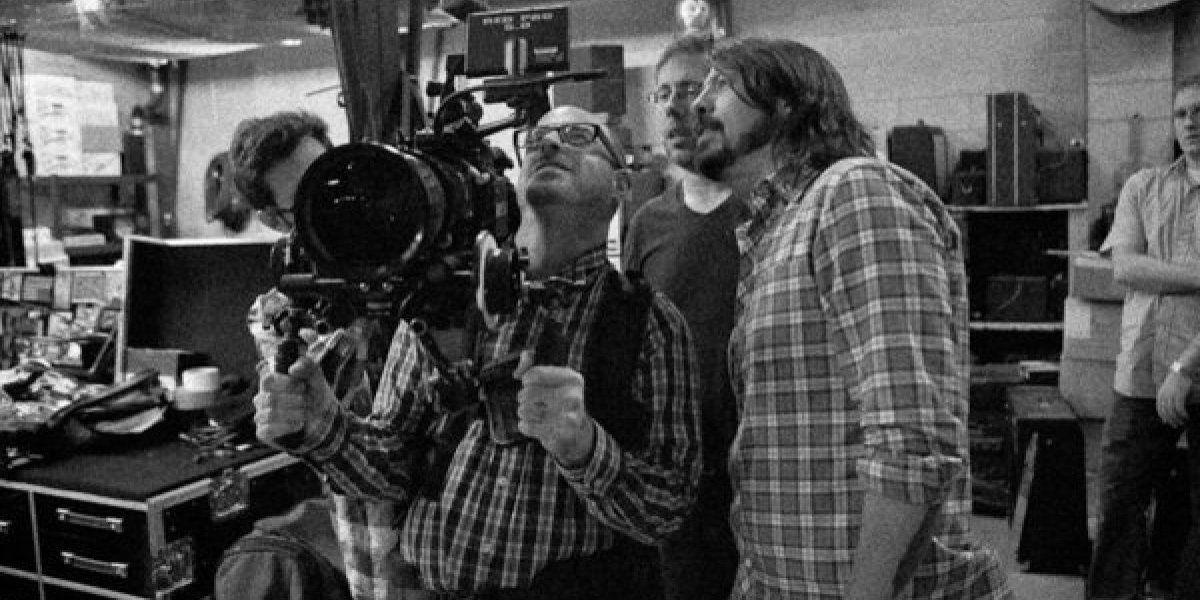 Directed by Foo Fighters frontman David Grohl, this 2013 documentary is all about the titular studio in L.A. where numerous hit albums were recorded, stretching from Johnny Cash all the way to Slipknot. Grohl’s first band, an obscure little-known grunge band named Nirvana, recorded their album Nevermind at the studio, lending the film a personal connection to its filmmaker.

Grohl’s passion for the influential space, as well as general reverence for the art of recording music, come through in his film as it unfolds the place’s long and storied history. It’s a great history lesson, as well as an entertaining musical odyssey. 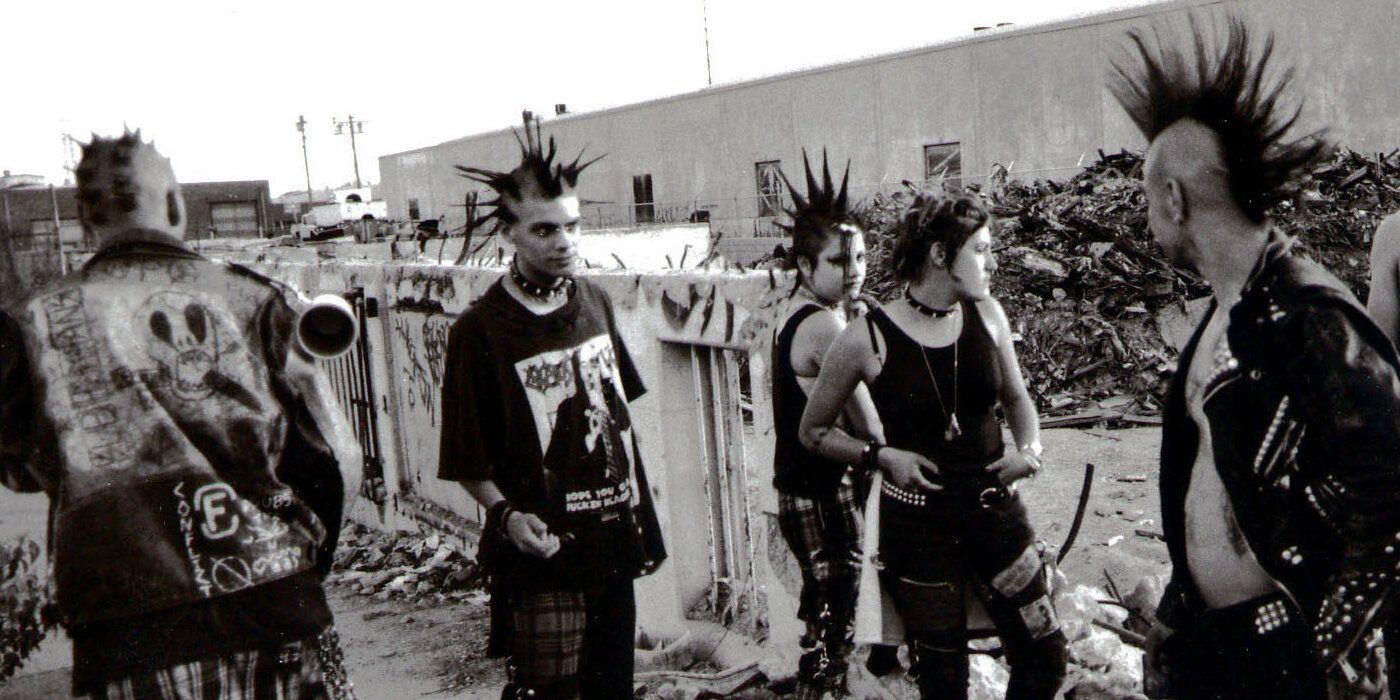 Iconic. Influential. Disturbing. Important. These are all adjectives that appropriately describe Penelope Spheeris’s seminal documentary film about the punk scene in Los Angeles as it evolves throughout 1979-1980. Perhaps most notably is the film’s segment on punk icons Germs as they deal with addiction and increasingly rowdy performances broken up by LAPD officers.

Germs lead singer Darby Crash would go on to commit suicide later in 1980, shortly after filming had wrapped. Spheeris followed this film with two follow-ups about the hair metal and “gutter punk” scenes, respectively. Still, the original remains a powerful look at an underreported turbulent time in music history.