8 Overwatch Halloween Event Easter Eggs You Might Have Missed 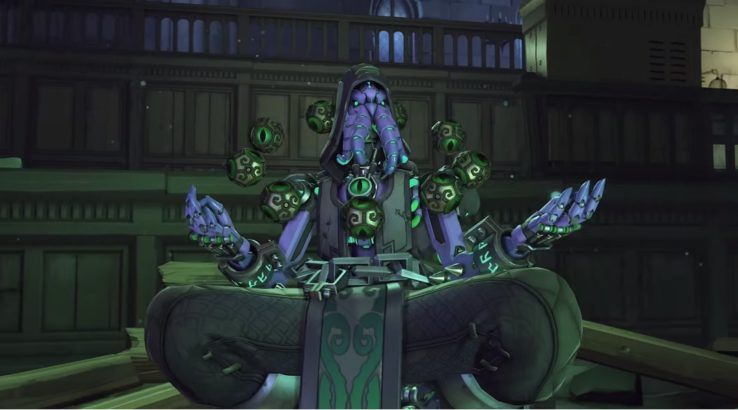 8 Overwatch Halloween Event Easter Eggs You Might Have Missed

The Overwatch Halloween event includes several Easter eggs in the new version of the Eichenwalde map, the new Halloween skins, and Junkenstein’s Revenge.

You Are Reading :8 Overwatch Halloween Event Easter Eggs You Might Have Missed 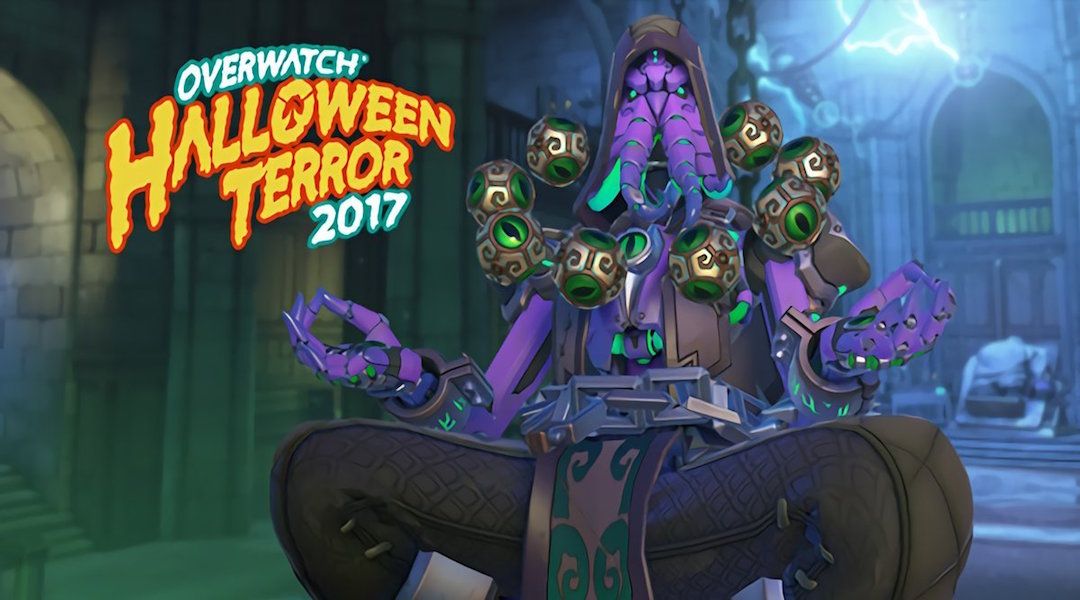 Overwatch Halloween Terror is well underway and provides gamers with a chance to play the Junkenstein’s Revenge game mode and unlock some delightfully spooky loot. From supernatural skins and sprays to a variety of brand new voice lines, this limited time event is most definitely a treat and not a trick.

But loot and game modes aren’t the only things that the Overwatch Halloween event offers. The update is also packed with fun little secrets and surprises for fans to uncover, and Game Rant has selected the top eight Easter eggs.

Dr. Junkenstein is the MVP 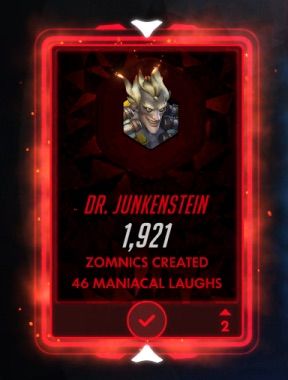 Junkenstein’s Revenge pits four players against Dr. Junkenstein, his zomnic minions, and his demonic pals. Players can get themselves onto the leaderboard too, as the game’s end cards highlight their performance across different stats such as the number of zomnics killed, or how many kills they got with a certain ability.

However, if one player fails to get their own stat card, Overwatch will put Dr. Junkenstein in as a replacement. After all, those maniacal laughs of his are pretty good and the cackling antagonist deserves some praise for it.

How to Photobomb Junkenstein’s Revenge Villains

When players aren’t trying to get themselves on the leaderboard, Junkenstein’s Revenge also allows players to practice their photobombing skills. Players can get into frame and emote when the mode’s bosses (Roadhog, Mercy, Reaper and Symmetra) show up and the camera zooms in on them.

Photobombing is usually a case of just remembering where to stand but as the video above explains, the map includes yellow clovers that mark exactly where players need to stand. Getting the timing right is another question but at least players know where to go.

Another Overwatch Halloween Easter egg you might have missed is the exploding crow on the Junkenstein’s Revenge map. Tucked away on a ledge above the door, the crow is fairly inconspicuous, but shoot it enough times and it will go ‘pop!’ and leave a mystical purple cloud behind.

It’s an incredibly small touch but some fans remain convinced that this Easter egg is part of a bigger picture. Could it be a teaser for hero 26? 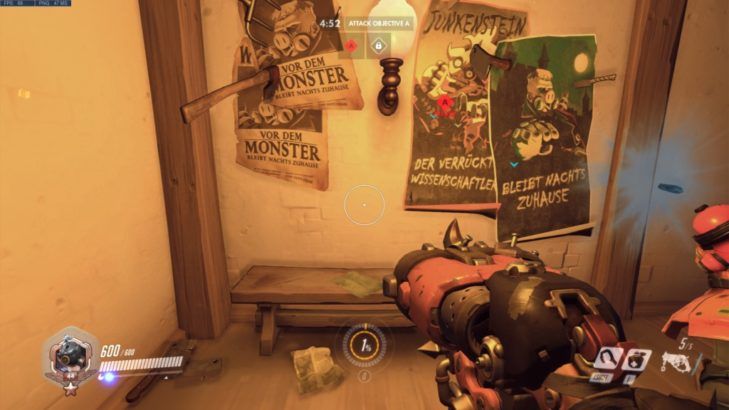 The Junkenstein’s Revenge map isn’t the only part of the game filled with Easter eggs, though, as Eichenwalde (Escort) has also been given a Halloween makeover. One particular change includes the posters in the attacking room spawn.

While the posters previously detailed the Omnic crisis, these have now been changed to warn players about the nefarious Dr. Junkenstein. They also warn players to watch out for Junkenstein’s Monster, as the terrifying creature is as dangerous as he is unsightly.

And, speaking of Junkenstein’s Monster, Eichenwalde does include a nod to the creepy version of Roadhog as well as the Junkenstein’s Revenge game mode. On the Defenders side of the Escort map, various contraptions have been set up by Dr. Junkenstein has he prepares the final touches on his terrifying creation.

Junkenstein’s Monster is alive, but covered over with a cloth as some sort of machinery prepares to zap him to life. As far as we’re aware, the creature cannot actually be brought to life by players during the Escort game mode, but it’s a nice Easter egg nonetheless. 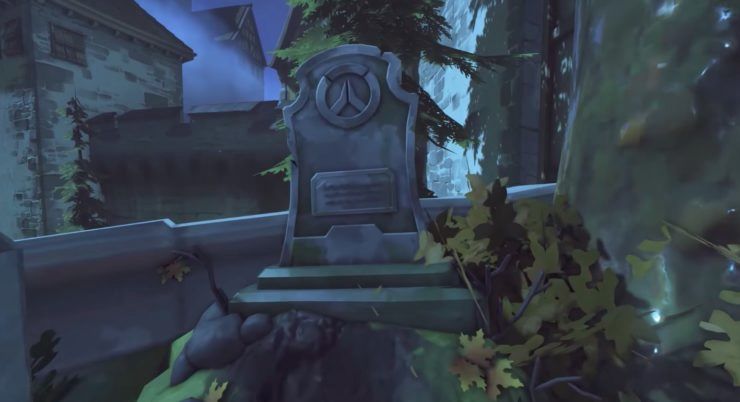 Additionally, the Eichenwalde map includes its very own graveyard. While most of these graves are fairly nondescript, one of them, pictured above, is styled in the exact same way as the R.I.P victory pose.

Those victory poses give the game’s playable characters a headstone, with their leg/arm/head/weapon poking out of the dirt. Though this one doesn’t include any identifying features – could it also be part of an overall hero teaser?

Cultist Zenyatta is Watching You

It’s not just the game mode or maps that include fun Easter eggs, as fans have also picked up on some interesting changes of the Cultist Zenyatta skin, an unlock only available during Halloween Terror.

Not only does the skin turn Zenyatta’s robotic arms into robotic tentacles, but it also turns the omnic’s orbs into eyes that move about in their sockets. Cultist Zenyatta also includes a few alternate voice lines including “the Iris consumes you” (instead of ’embraces you’) and “curse and madness be upon you all” (instead of ‘peace and blessings’).

Symmetra is a Portal Fan

The final Overwatch Halloween Easter egg is one of Symmetra’s new voice lines. Overall, the game includes 22 different Halloween voice lines but its Symmetra’s new one that really stands out. The support hero says “the treat is a lie” in reference to “the cake is a lie” meme from Portal. It’s especially fitting given that Symmetra can actually set up portals as her ultimate ability.

Overwatch includes a swell of content to unlock and is updated regularly too. This gives Blizzard ample opportunity to introduce even more Easter eggs in the game even future, Halloween themed or not.

Overwatch is out now on PC, PS4, and Xbox One.