American Horror Stories’ Scarlett and Ruby share a few shades with Murder House’s Tate and Violet. Here are all the ways the pairs mirror each other. 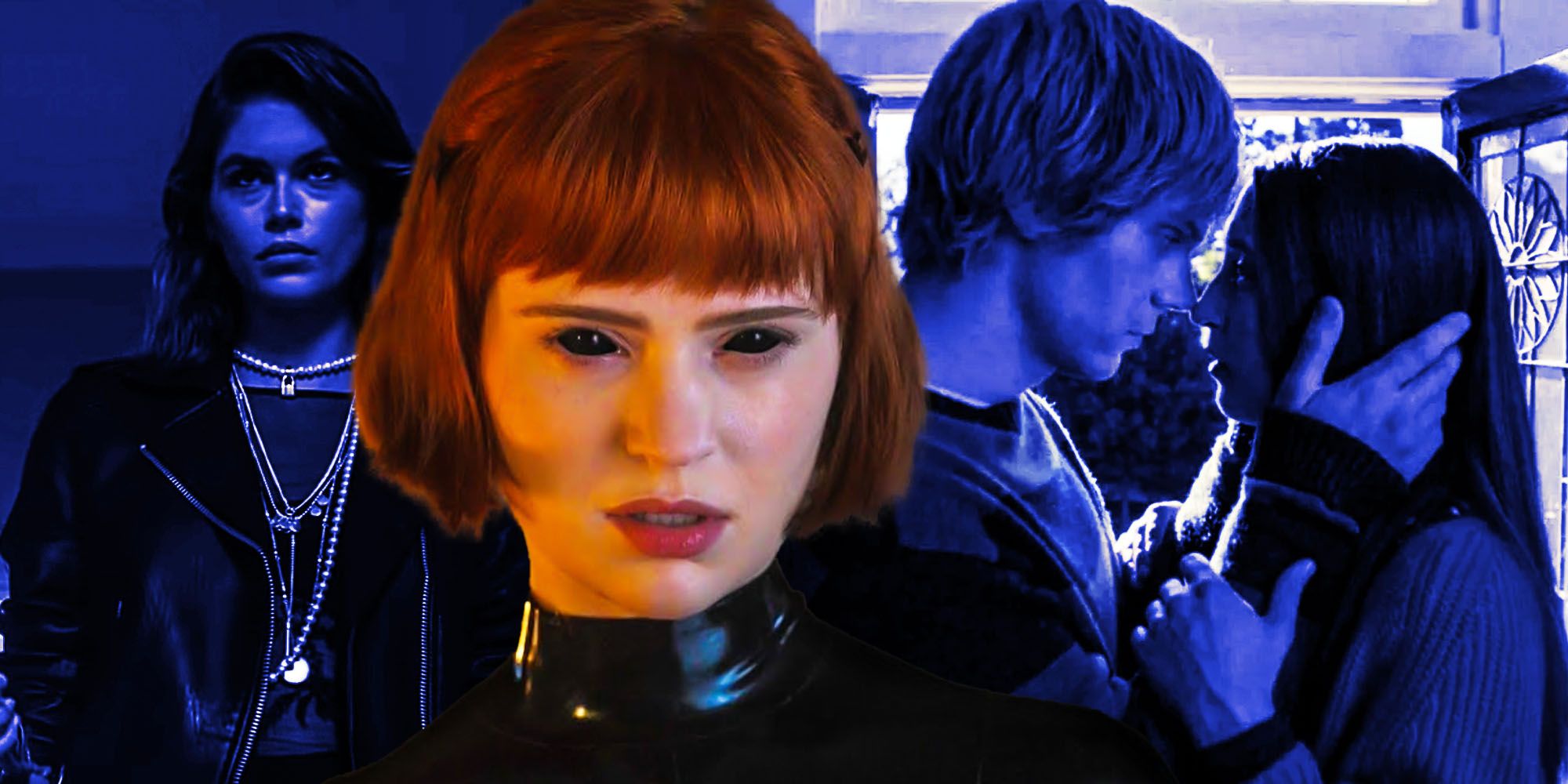 Played by Sierra McCormick, Scarlett Winslow was one of them. As the 16-year-old daughter of would-be haunted B&B owners, Michael (Matt Bomer) and Troy (Gavin Creel), she was forced to tag along. Ultimately, however, she found herself seduced by the dark spirits within Murder House – both metaphorically and literally. The decision to open with American Horror Stories episodes 1 & 2, “Rubber (Wo)man” was a shrewd one. It firmly laid out the show’s format on-screen, showing how it would evoke (and even overlap) with such as American Horror Story: Murder House while condensing similar tales to just an hour or two.

It also allowed Murphy & Falchuk to pluck at fans’ nostalgia and provoke feelings similar to those from the original series’ own inaugural outing. That was especially true regarding the twisted love story between Scarlett and Ruby McDaniel (Kaia Gerber). The writers likely sensed that they’d inevitably be compared to American Horror Story season 1’s own twisted pairing. As such, Murphy & Falchuk purposefully leaned into the similarities with several callbacks. Here’s a breakdown of all the ways Scarlett and Ruby echoed American Horror Story: Murder House’s Tate Langdon (Evan Peters) and Violet Harmon (Taissa Farmiga). 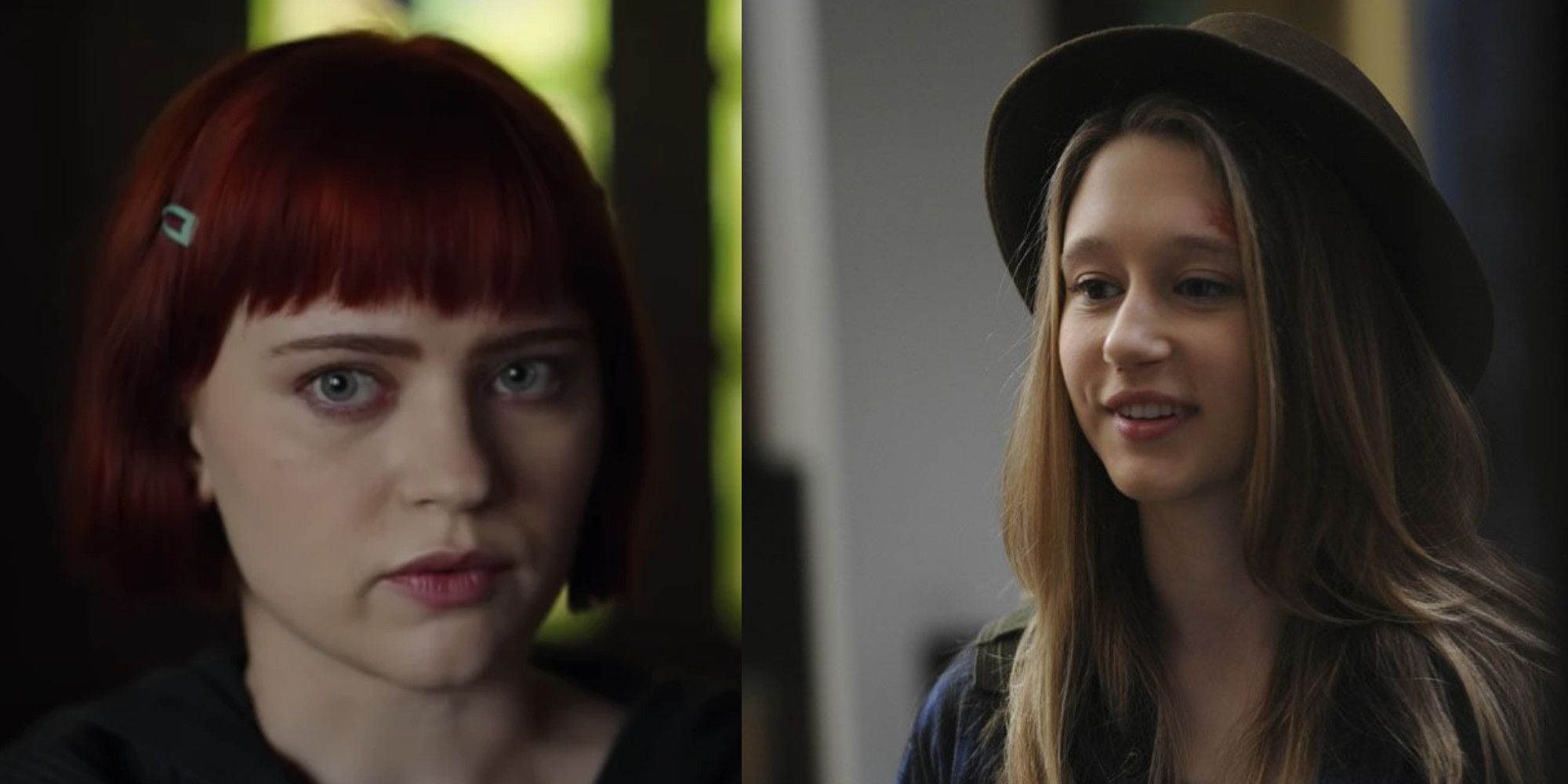 Tate once likened his and Violet’s relationship to that of Romeo and Juliet. And like Shakespeare’s ill-fated lovers, American Horror Stories asked, “What’s in a name?” In the case of the characters involved, the answer would at least have been a colorful one. After all, Scarlett shared her name with a shade of red, whereas Violet shared hers with a shade of purple. That fact helped to symbolize that while they were cut from the same cloth, they weren’t entirely the same – with Violet often having drastically different reactions.

Drawn To The Darkness 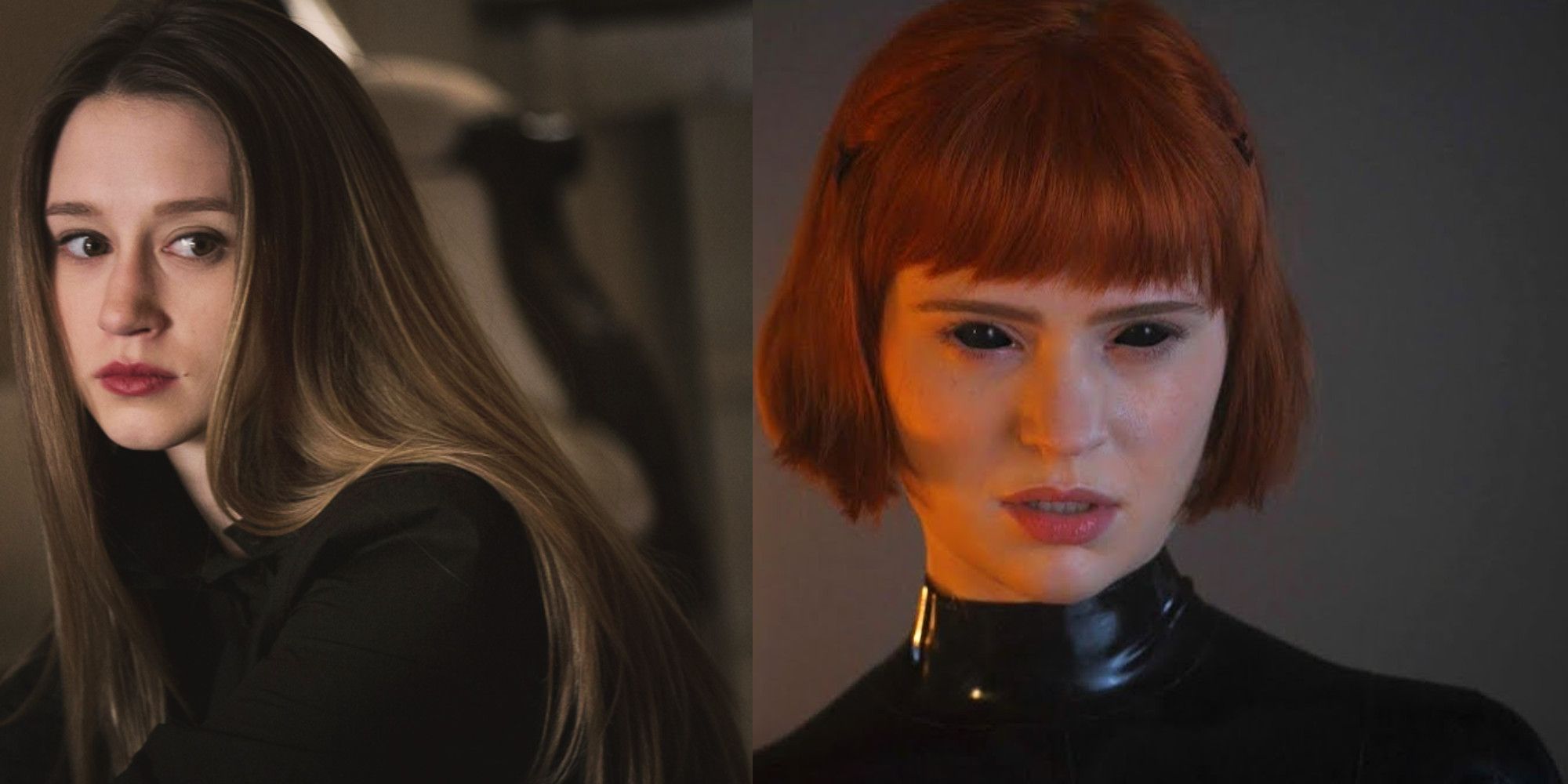 One of the ways Scarlett and Violet were similar was how both were drawn to darkness. For Violet, it was a fondness for all things morbid and creepy. For Scarlett, it was a range of sadistic sexual fetishes that greatly alarmed her parents. In both cases, it led to a romance with a Murder House ghost in the form of Tate and Ruby, respectively. What marked them as distinct individuals, however, was that Violet ultimately turned away from the darkness and chose light. Scarlett, meanwhile, threw herself headfirst into her dark side.

See also  10 YuGiOh! Cards That Were Censored For No Reason 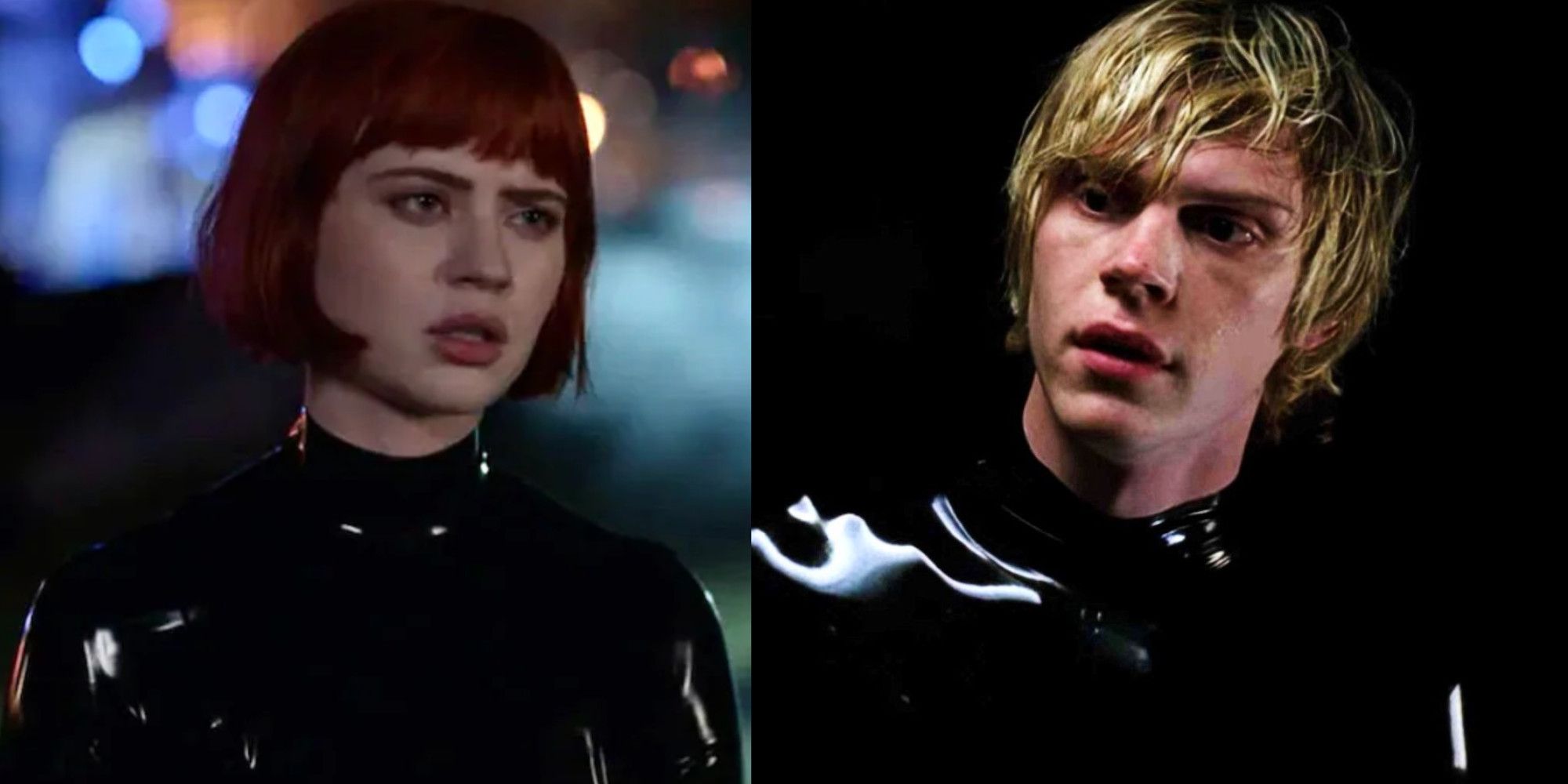 The catalyst for Scarlett’s embrace of her inner darkness was the discovery of the infamous Rubber Man suit. Though Scarlett initially freaked out and attempted to discard it, it creepily found its way back. Soon after, it became Scarlett’s costume of choice, for both Halloween and her murderous antics. As fans will remember, the suit originally belonged to Chad Warwick (Zachary Quinto). It was later co-opted by Tate, however, and similarly worn for both pranks and his own range of heinous crimes within Murder House. 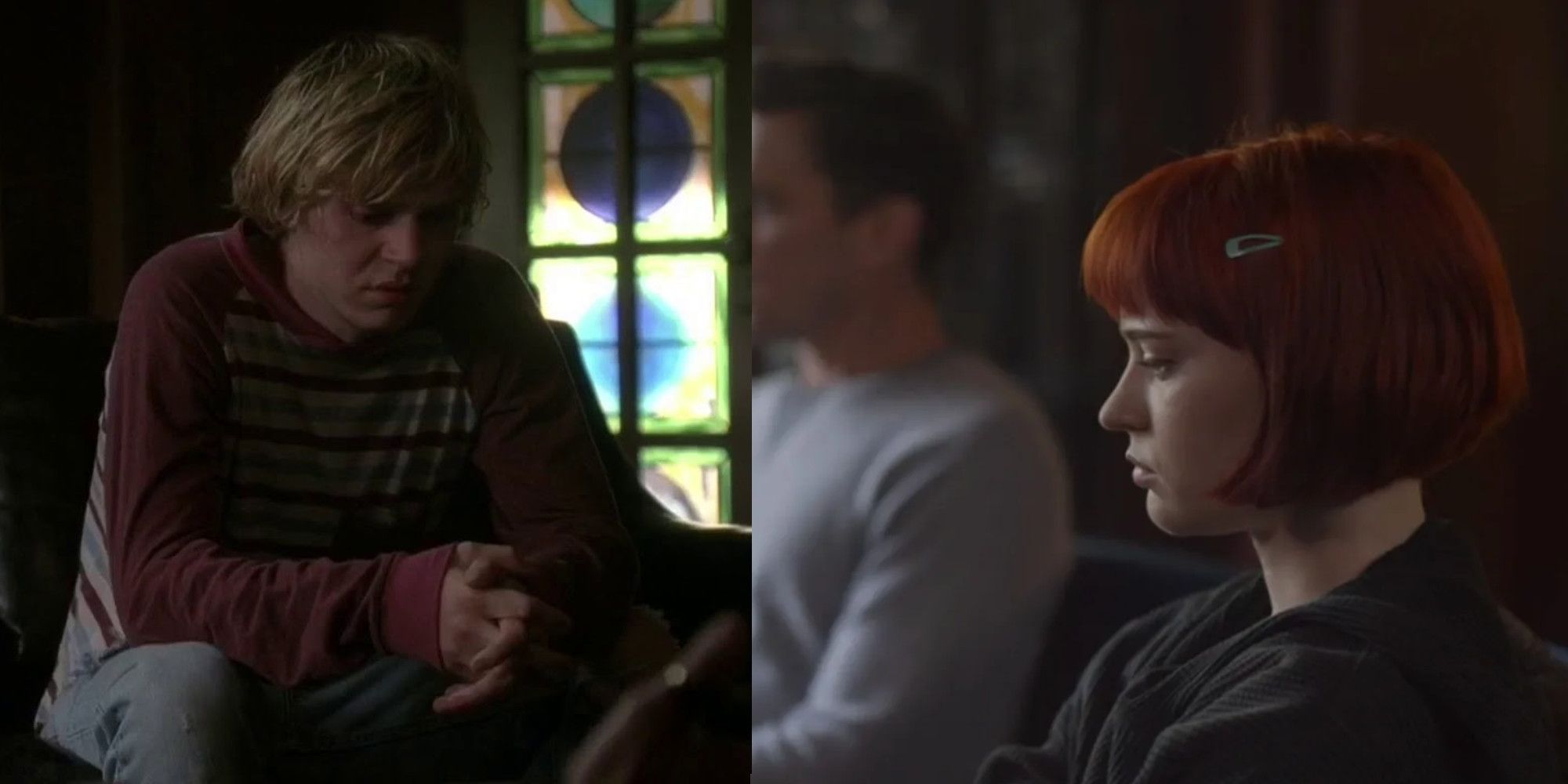 Along with the many horror movie Easter eggs in American Horror Story season 1, there was also an abundance of therapy sessions. As a trained psychiatrist, Ben Harmon (Dylan McDermott) saw a range of patients. Principal among them was Tate Langdon himself, who some believed could be cured of that which drove his dark impulses. Scarlett’s parents also signed her up for therapy for identical reasons. Scarlett’s sessions, however, were with Dr. Andi Grant (Merrin Dungey). Both doctors would continue their work (even mentioned as collaborating) after their respective deaths. While Tate showed some (eventually erased) signs of growth in American Horror Story: Apocalypse, Scarlett remained wholly unaffected. 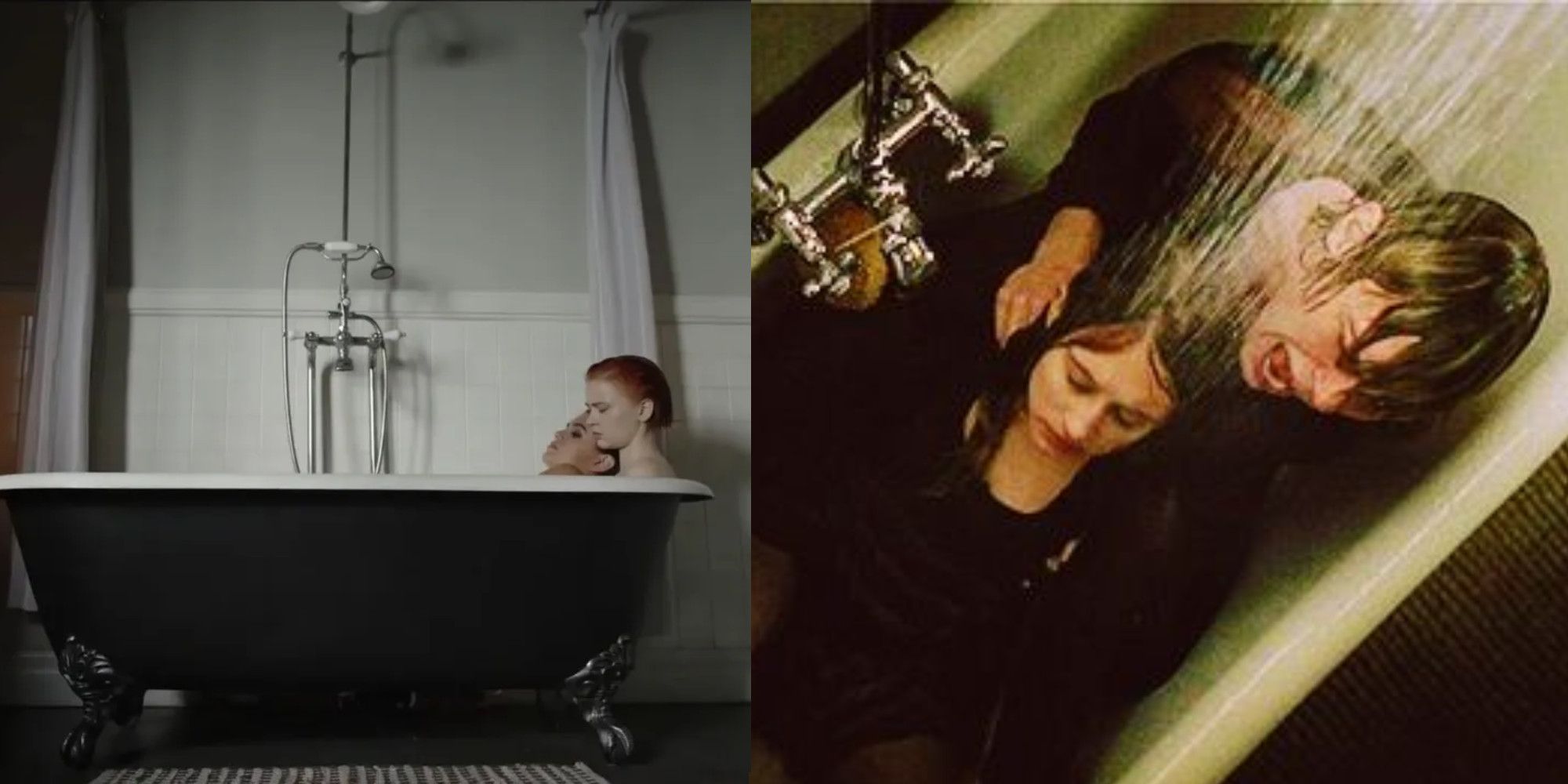 Another staple of the original series was the fact that many characters died during American Horror Story: Murder House. One of the earliest (and most shocking) was Violet Harmon herself. The moment came courtesy of an overdose taken in the wake of learning the truth about Tate’s own death. Tate dragged her into the bath, using the shower and making her vomit in order to try and save her. The same bathtub appeared in American Horror Stories, with Scarlett and Ruby sharing one as the latter shed light on her traumatic life. Ironically, while Tate and Violet’s scene was centered on preventing suicide, Ruby spent a portion of their time trying to talk Scarlett into killing herself so they could be together forever. 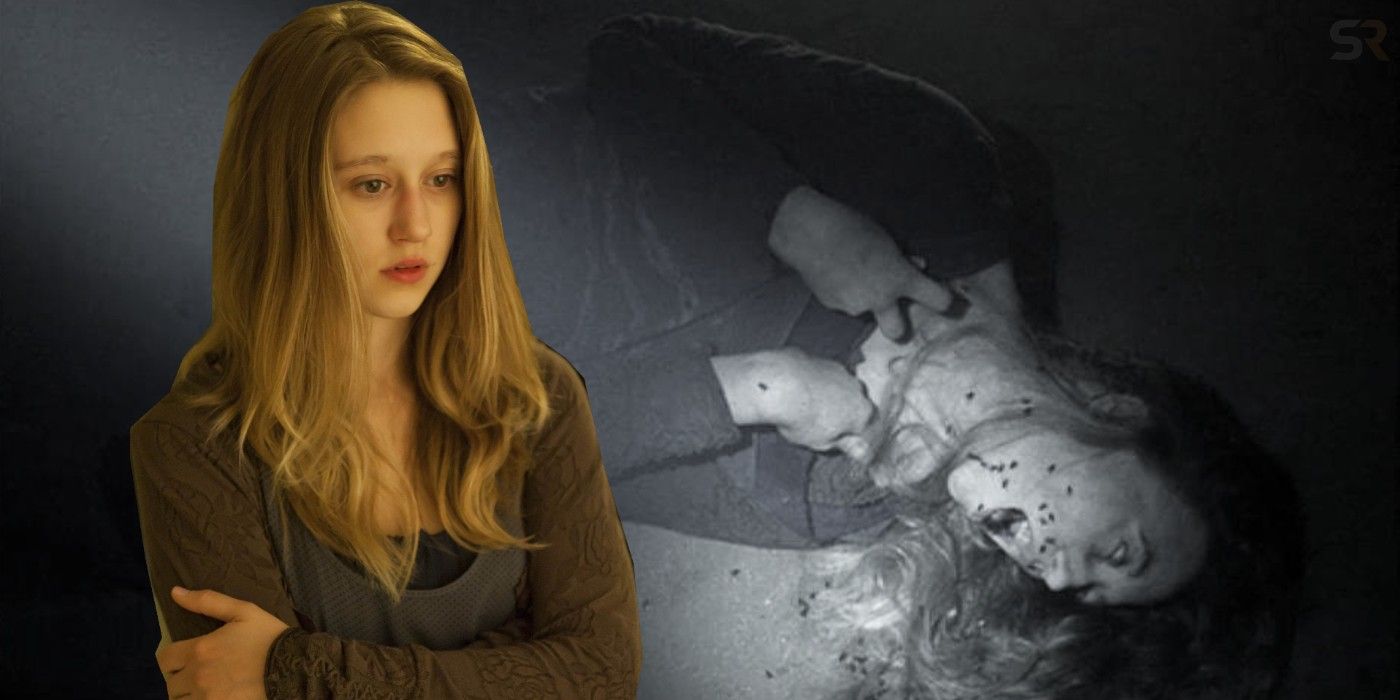 Violet’s death in American Horror Story season 1 was actually shocking on two fronts. For a time, it had seemed as though Tate had been successful in saving her. In truth, he’d hidden her body and she’s carried on oblivious to the fact she was a ghost. Violet only learned the truth when it was revealed she never left the house anymore, and her attempts at doing so resulted in her simply looping back into the house. The moment was called back to during American Horror Stories episode 2, “Rubber (Wo)man, Part 2” when others characters experienced the exact same thing. In this case, it was her parents that had unknowingly died rather than herself. Still, Scarlett also had to process and learn to adjust all the same. 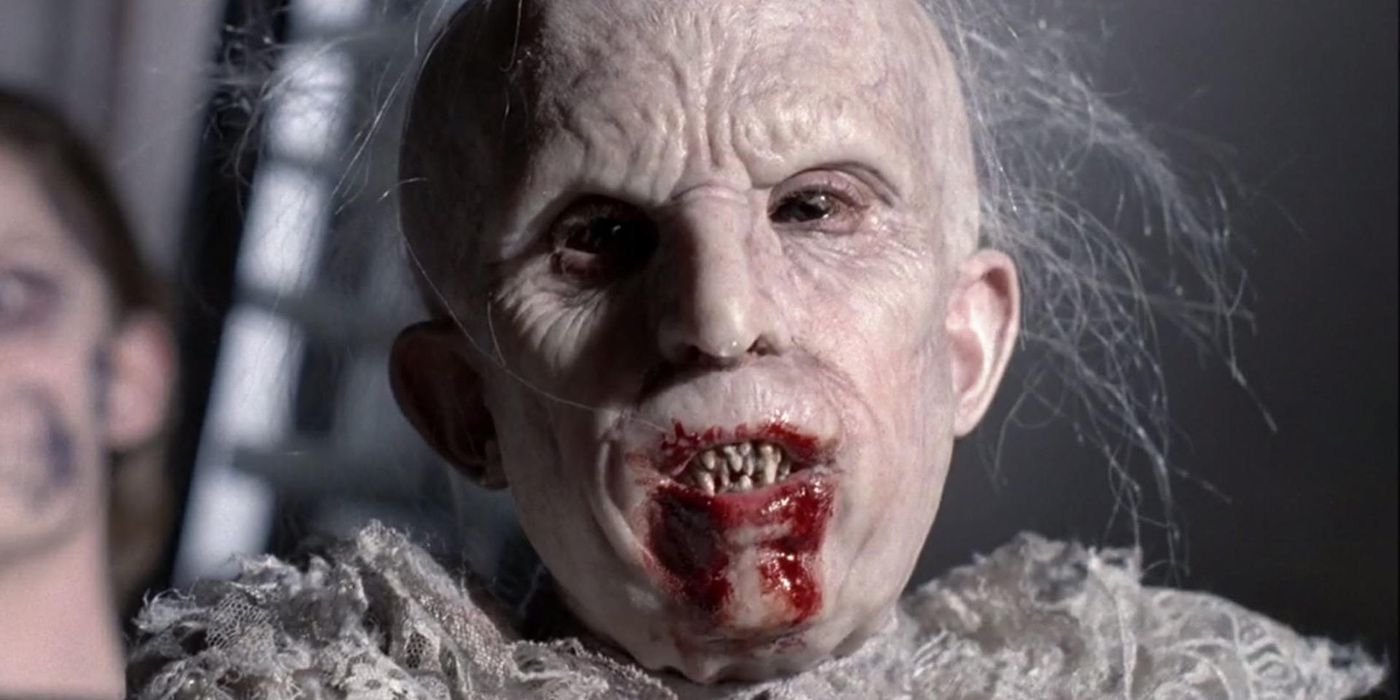 Upon moving into the (reportedly haunted in real life) Murder House, both Violet and Scarlett found themselves persecuted by local mean girls – to varying degrees. Both Violet and Scarlett displayed similar mindsets for revenge, luring their respective tormentors into the basement of Murder House. In both cases, the bullying teens encountered the terrifying and bloodthirsty Thaddeus Montgomery (a.k.a. The Infantata). While Violet was content to simply scare her enemies, however, Scarlett followed up the terror by also murdering them. 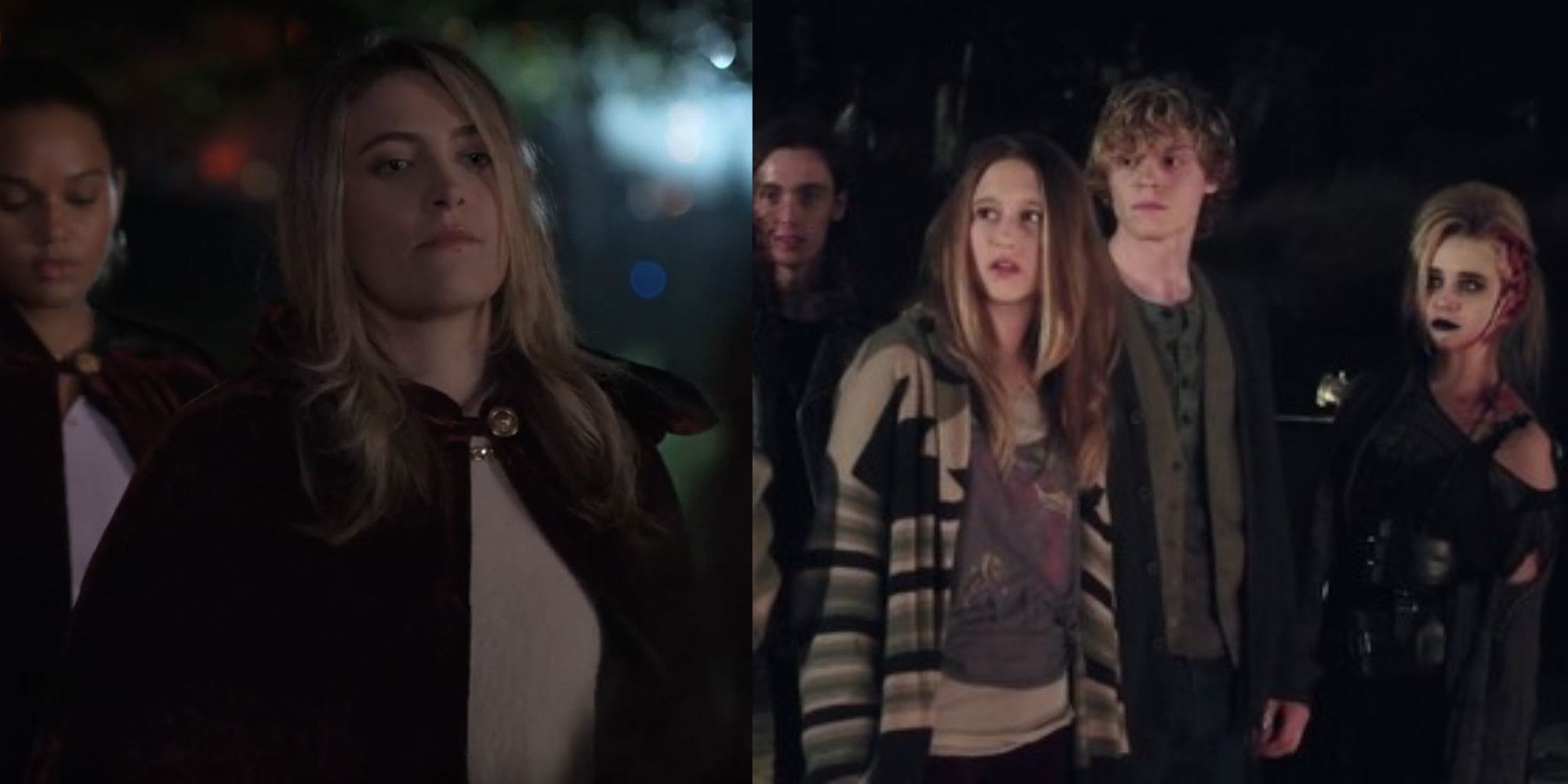 Both American Horror Story: Murder House and American Horror Stories explored the freedom that ghosts have on Halloween. No longer confined to the house, they were allowed to walk the Earth for one night. Tate and Violet utilized that time to have a proper date. Not long after arriving at the beach, however, Tate and Violet were confronted by the understandably vengeful victims of Tate’s school shooting, controversially depicted in American Horror Story season 1. Having arranged a similar outing, Scarlett and Ruby are similarly targeted by Maya (Paris Jackson) and the others that Scarlett brutally killed in the basement.

The “Normal People Scare Me” Shirt 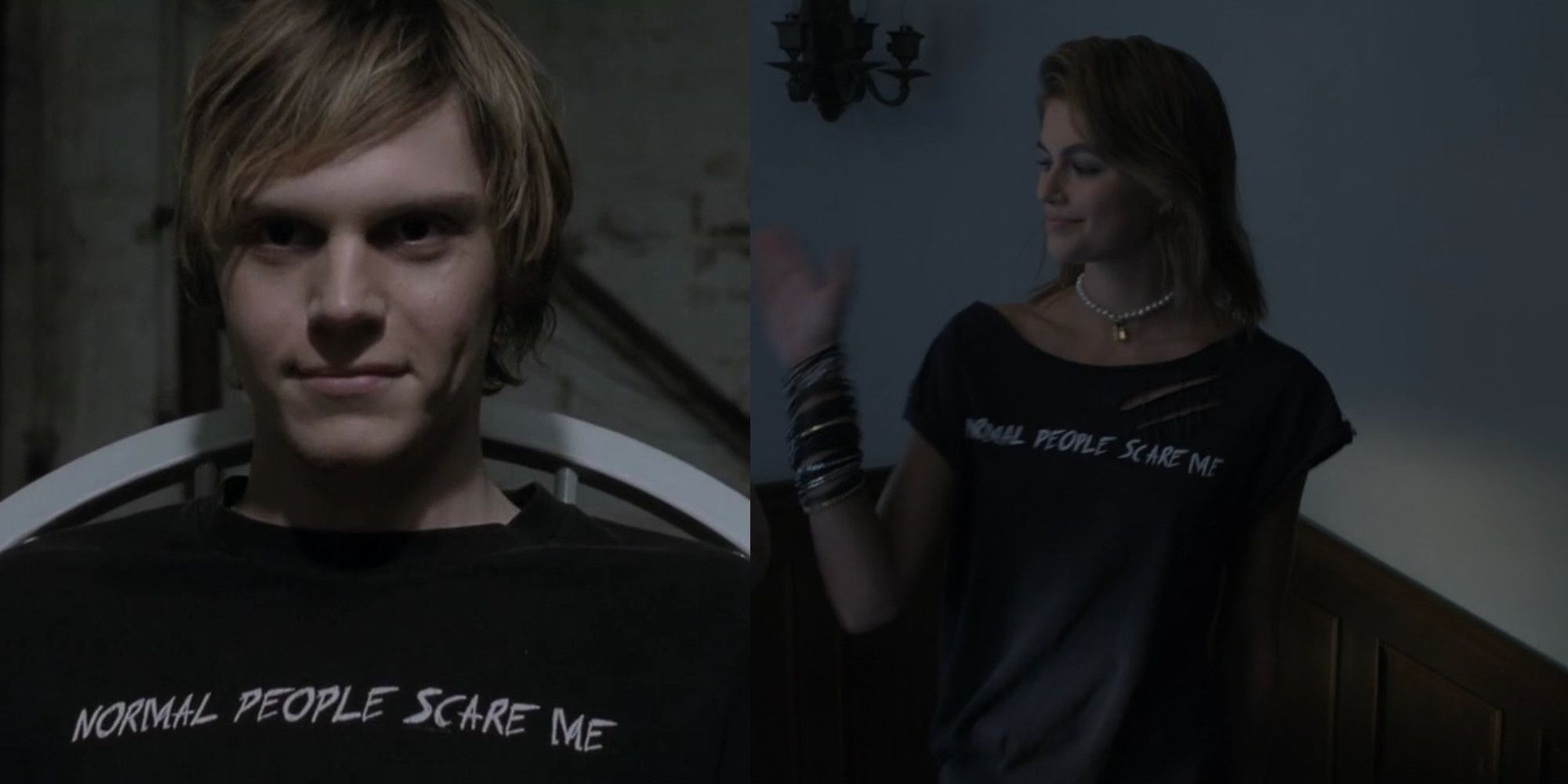 As American Horror Stories episode 2, “Rubber (Wo)man, Part 2”, wrapped up its twisted tale, Ruby was glimpsed wearing a very recognizable shirt. Plain black, it had sprawled across it in white lettering the words, “normal people scare me.” It had some notable differences in terms of its sleeves and distinct rips on the shoulder. Regardless, it was all but identical to the shirt Tate wore for the aforementioned basement prank in American Horror Story season 1, episode 1, “Pilot.” Whether or not Ruby was gifted it directly by Tate was left unclear. 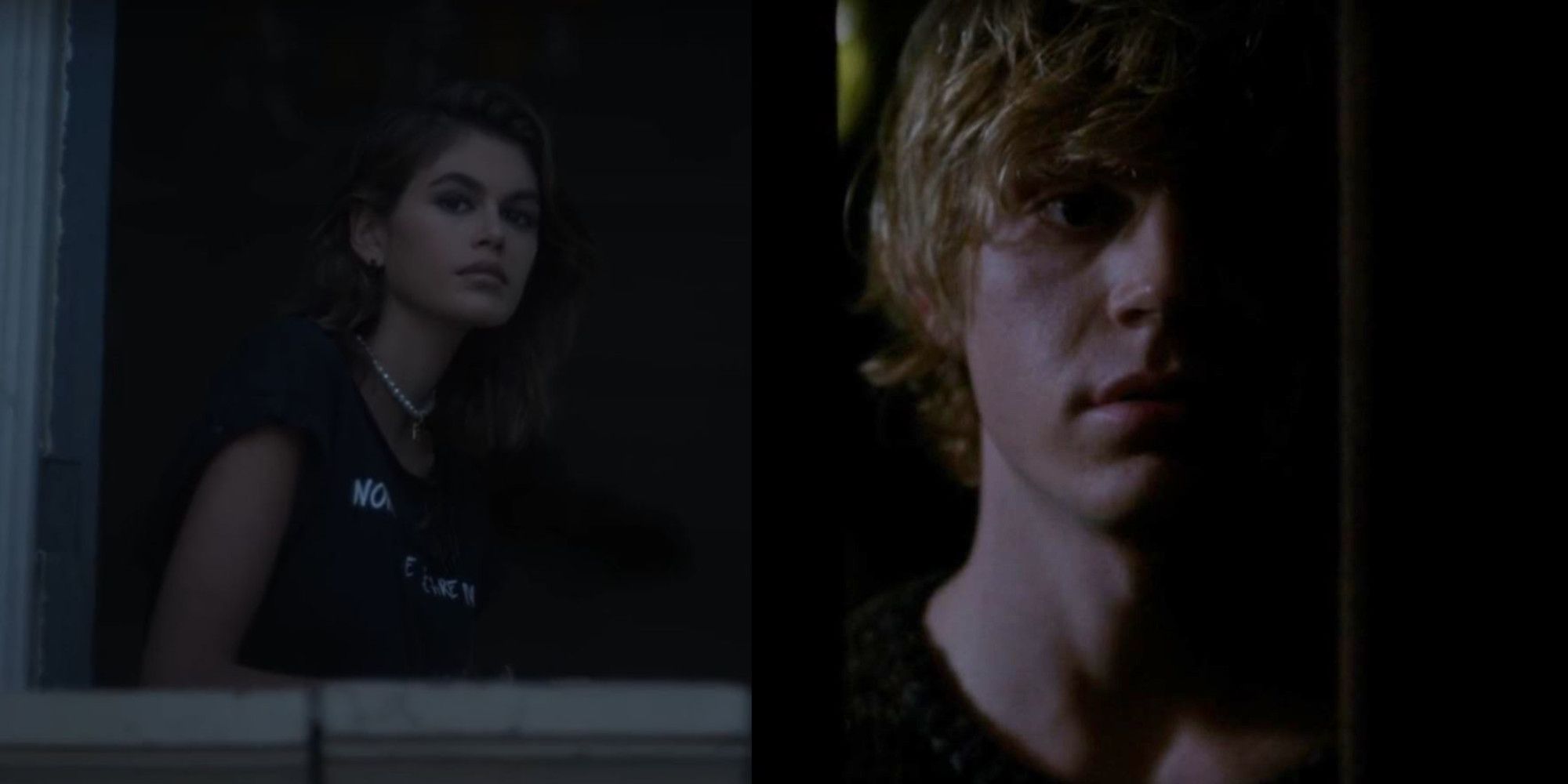 The same taste in shirts wasn’t the only thing that Ruby and Tate shared. Both characters ended their respective American Horror Stories season 1 and American Horror Story: Murder House journeys in similar places. After Scarlett decided that she wasn’t ready to let go of life yet, Ruby was left to wait as she went off to explore the world. Though Scarlett would return every Halloween, Ruby could be seen sitting by the window and looking out longingly. After Violet officially rejected him, Tate was left waiting and watching with identical longing, as the Harmons celebrated Christmas, vowing, “I’ll wait forever if I have to.”