Paul Thomas Anderson and Radiohead’s Thom Yorke team-up for a dreamlike short film on Netflix, but what is Anima and its songs really about? 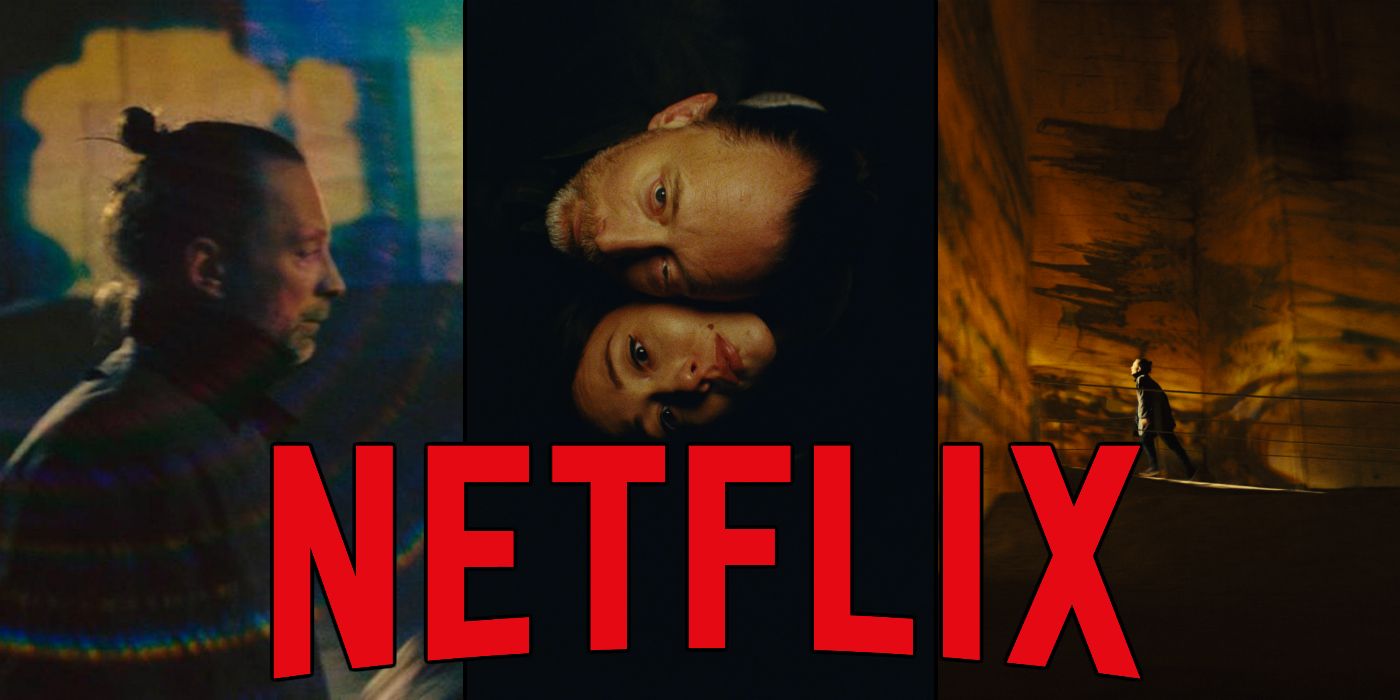 Paul Thomas Anderson and Radiohead’s Thom Yorke have teamed-up for a new short film on Netflix, Anima, and like much of the pair’s work it’s one very much open to interpretation. Anderson and Yorke are calling this a “one-reeler”, inspired by the short, silent films of old, but it’s mostly an extended music video.

Anima isn’t the first time the pair have worked on such a project, but is rather the latest in a long list of collaborations between PTA and Radiohead. Anderson has helmed three of the bands music videos previously, while Radiohead guitarist Jonny Greenwood has scored all of the director’s films since 2007’s There Will Be Blood.

Now on Netflix, Anima is a logical continuation of the creative partnership between Anderson and Radiohead’s members. Complemented by the lush cinematography of Darius Khondji, it’s a dreamy journey through the head of Yorke as seen by Anderson. Following a commuter in Prague, it spins off into a hazy, balletic trip that bears much closer inspection. 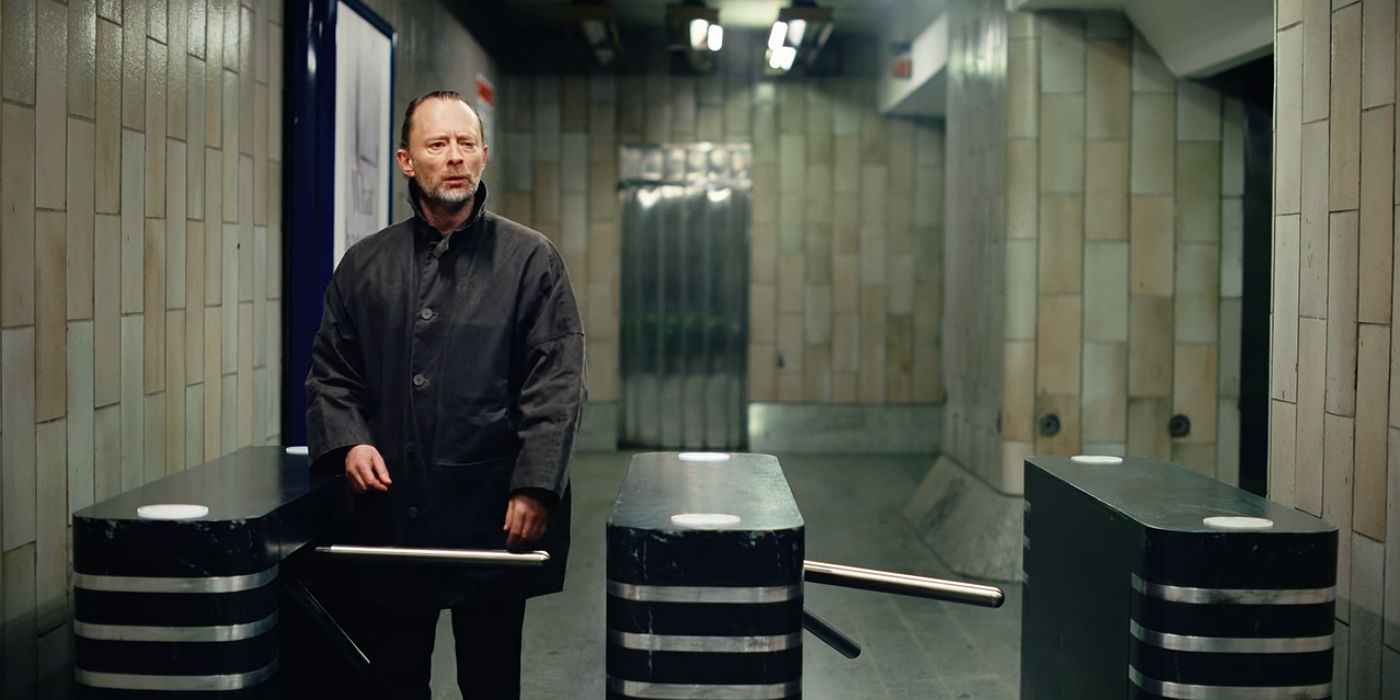 Even though Anima is just 15 minutes long, and doesn’t possess a narrative in the most straightforward or traditional sense, it still falls nicely into a three-act structure thanks to how it’s framed around Yorke’s music, with each song backing a different part of the story. The first, called “Not The News”, is the easiest of the bunch to follow.

Anima’s story begins on a subway train in Prague, where we’re introduced to Yorke’s protagonist (in keeping with the silent movie inspiration, no one in the movie speaks, and nor do we learn their names). Everyone around Yorke is asleep, and he himself is just starting to drift off. That’s when the dancing begins, a sort of dreamlike, almost sedentary move that conveys the slow trudge to the office in its most artistic form. Everyone is dressed in the same drab colors, performing the same routine. It’s a comment on being stuck in the rat race, of being part of the system.

Of course, Anima isn’t quite as simple as that. There’s also the presence of Italian actress Dajana Roncione, who catches Yorke’s eye on the train (and is his partner in real-life). Yorke is the only one unable to make it through the ticket barrier, meaning she disappears from view. It gives this sequence a sense of longing and wistfulness, speaking to the connections we do – or don’t – make with those around us. “Who are these people?” Yorke sings on this track. He continues: “You’re starting violence / And say nothing.” As we watch the nameless grey bodies swarm past him, none of whom seem to notice this person cannot make it through the barrier (while Yorke himself is attempting to return another passenger’s briefcase), it reads as a commentary on society as a whole. This is Yorke’s statement on what’s happening in the world around us – especially politically – and how people pay no attention. As long as they’re OK, then they’re sleepwalking through it. 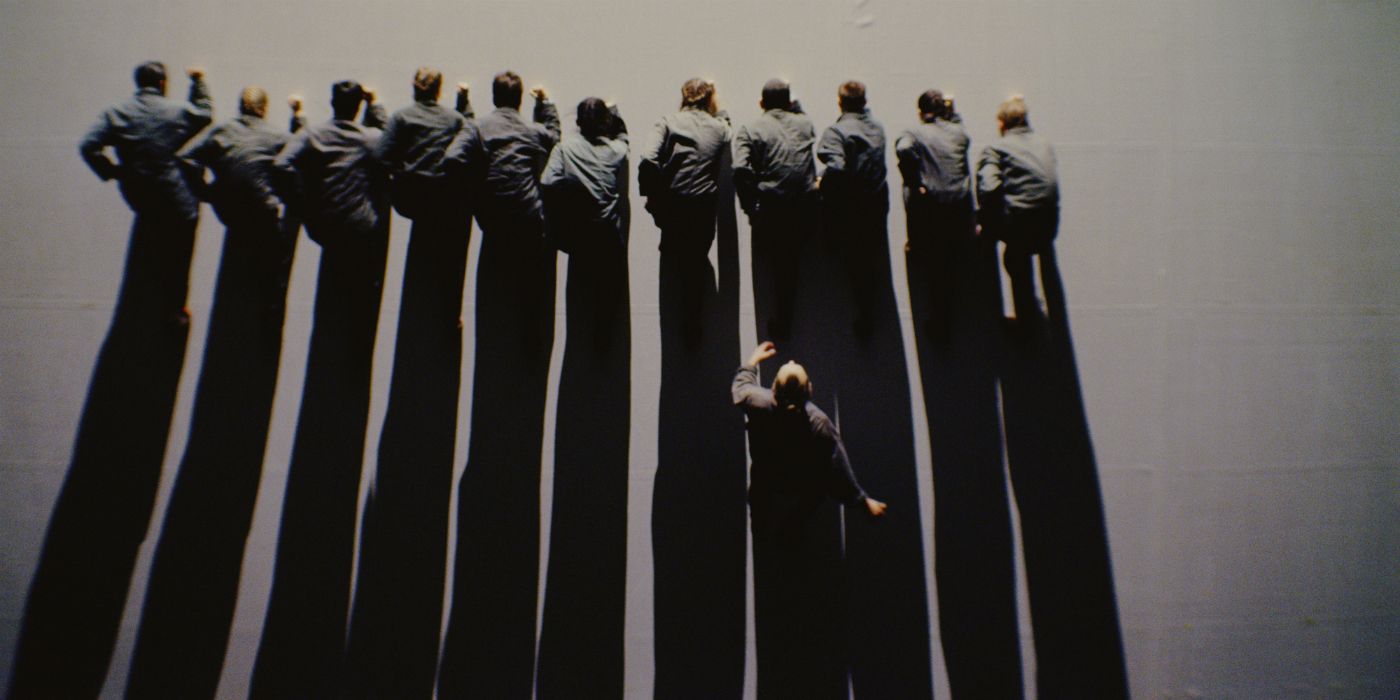 Yorke, unable to get through the barrier, is then pulled out of the station and down the rabbit hole. Making his way through a series of art projections, Yorke ends up on a tilting grey slab. Once again faced with a crowd of people dressed in drab colors, he’s continually thrown off balance by the moving floor beneath him.

If the first part of Anima was about the daily grind, then here we find Yorke struggling to maintain that balance, and eventually giving himself over altogether. He’s “submerged”, as he sings on “Traffic”, and the music picks up the pace. It becomes more techno-fused, the dance choreography becomes a little wilder and livelier. It’s freeing. The briefcase is kicked to the side. It captures that essence of work being over, of going out and partying. Newspaper cuttings fly past, because yesterday is old news. Yorke’s lyrics become more nonsensical – he sings about “foie gras” here – and yet still carry the thrust of the point, as he whispers “you’re free.”

Again, there’s the importance of dreams to this piece too. If “Not The News” is about that struggle to fall asleep, then “Traffic” finds Yorke fully falling into it. It’s surreal and weird, but it also might be the only place where any of the real world actually makes sense. 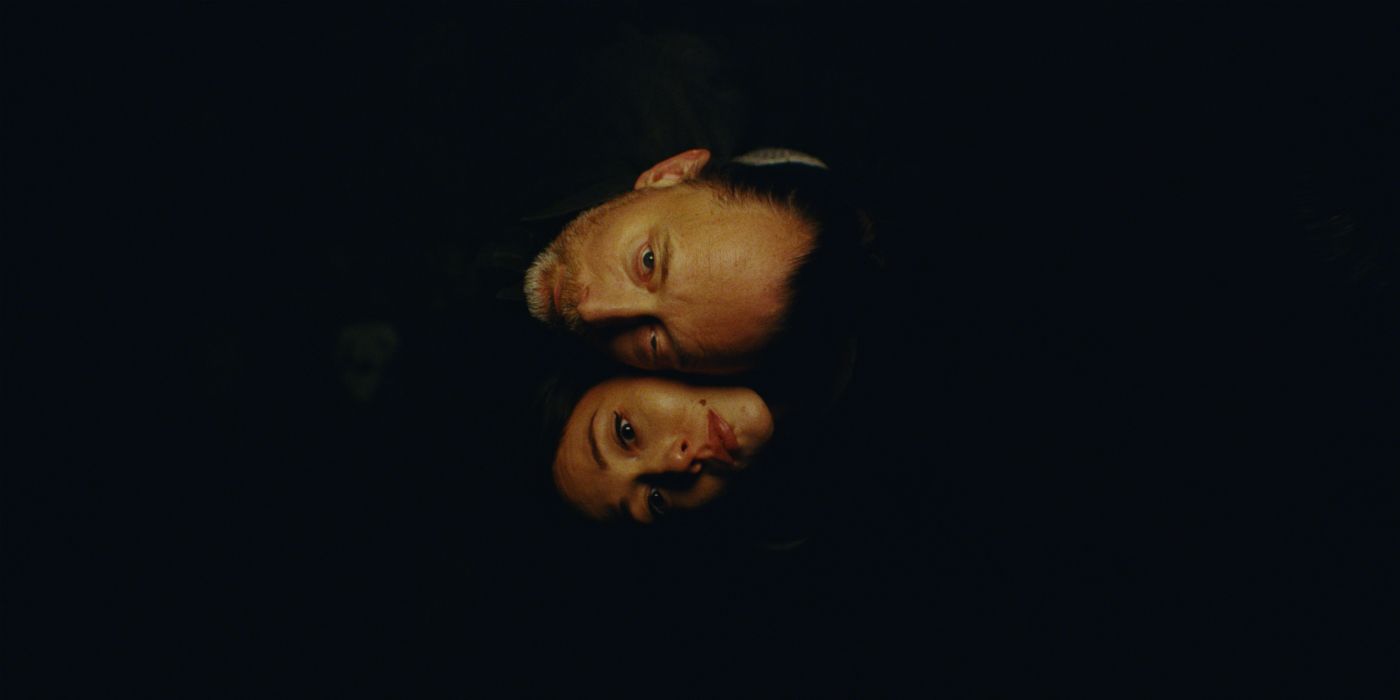 The final part of Netflix’s Anima also happens to be the best. It’s the one where PTA and Yorke’s collaboration is most fully realized and serves its greatest purpose, and in which there’s something close to resembling an actual narrative thrust. Backed by the song “Dawn Chorus”, it finds Yorke reunited with Roncione, the woman from the subway train.

Yorke sings of “A little fairy dust / Thousand tiny birds singing,” which plays nicely with just how dreamlike this sequence is. The duo twirl together through the streets, dovetailing with lyrics such as “In the middle of the vortex / The wind picked up / Shook up the soot / From the chimney piles / Into spiral patterns / Of you my love / I take a little piece / And break it off.”

It’s in this sequence that Anima has a real air of romance, albeit a slightly blurry one. Looking at it from the point-of-view of an all-nighter, then this is the couple spilling out of the club in the early hours of the morning. It captures that feeling of a perfect night; of making a genuine connection with someone that you never want to end. Again, it connects back to dreams too: when you’re lost so far into such a wonderful dream that you don’t want to wake up and lose the memory of it. You fight to stay asleep, but eventually, know you have to. “It’s the last chance,” Yorke mourns. “It’s the dawn chorus.” 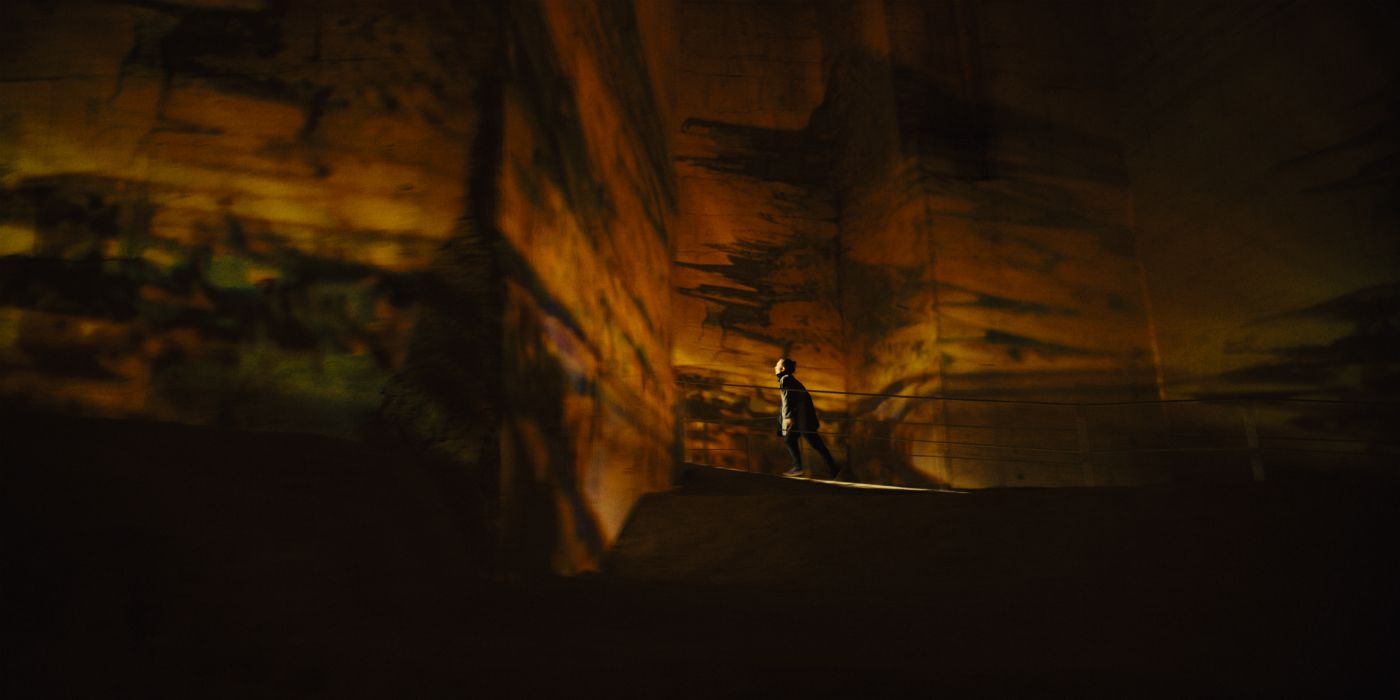 Netflix’s Anima isn’t likely to have mainstream appeal, but fans of both Paul Thomas Anderson and Thom Yorke should find plenty to love here. The director has become increasing thoughtful and probing in his work (like with 2017’s stunning Phantom Thread), a style that complements the grander ideas Yorke is bringing to the table in Anima.

In just 15 minutes, Netflix’s Anima takes us on a journey: from the commute to work, to a wild party, and then spilling out into the streets in the morning, not yet ready to face the realities that lie ahead. It works on quite a literal level as that, representing the brief freedom that comes with going out and having a good time. It’s also about society, and the way we passively move through it in our own worlds.

Yorke, though, has become increasingly occupied with the idea of dream states, and has previously spoken about the impact of Carl Jung upon him. That influence is heavily felt in Anima. The title comes from Jung’s own philosophy; the anima is the unconscious feminine side of the male psyche, which he believed manifested in dreams. Yorke first sees Roncione as he’s attempting to sleep, and now they’re together when he’s unconscious. In Yorke’s dream, the masculine and feminine have been re-joined as one whole.

As the sun rises and Yorke boards a tram at the film’s end, we’re invited to question whether this has all been a dream. It ends as it begins, and you could very well start Anima again and play it on a loop, which suggests another comment from Yorke about the daily routine. The difference in Anima’s ending, though, is that because of that ethereal dance with the woman still sitting opposite him, he has something to hold on to, something to remember, and even something to wake up for.