Another Green Lantern Has Embraced The Sinestro Corps Instead

Another Green Lantern Has Embraced The Sinestro Corps Instead

Just like Sinestro when he left the Green Lanterns in DC Comics, Jessica Cruz is embracing the yellow light of fear while revealing its true nature.

You Are Reading :Another Green Lantern Has Embraced The Sinestro Corps Instead

In DC Comics’ new annual issue for Green Lantern, Jessica Cruz decides to join the Sinestro Corps and wield the yellow light of fear. With Oa’s Central Power Battery destroyed and nearly all Green Lantern rings having lost their power, Jessica wielded a yellow ring she recovered out of necessity, using it to make her way home. However, Sinestro allowed her to keep the ring while also revealing to Jessica the true nature of his corps’ power, confirming that the emotion of fear is not inherently evil by any means.

In the issue, Jessica had taken down three Yellow Lanterns, commandeering one of their rings to temporarily replace her depowered green ring so she could get home. However, as she dropped off her prisoners on New Korugar, Sinestro himself marveled at her natural ability, seeing as how one of the Lanterns she took down was his second in command Lyssa Drak. While Jessica conceded that she did indeed feel powerful using the ring, she also feared its power and what she could do with it (which Sinestro confirmed she’s meant to). While the chief rival of the Green Lanterns offered Jessica a place within his own corps, Jessica refused. However, he still allowed her to use the ring to get home in the annual issue from Ryan Cady, Sami Basri, and Tom Derenick.

That being said, Jessica decided to open herself up to the power of the Yellow Ring as she traveled home, and much of what Sinestro had said to her about fear started making sense. In Sinestro’s eyes, the yellow light of fear does so much more than just terrify people. As fear burns throughout the galaxy like a beacon or signal fire, his Lanterns go to seek it out and help where they can. Rather than imposing their will upon others, Sinestro believes that control and peace can be brought about using empathy, seeing as how fear is understood by good and evil alike. Likewise, Jessica begins to understand what he meant as she embraces the power of the Yellow Lanterns. 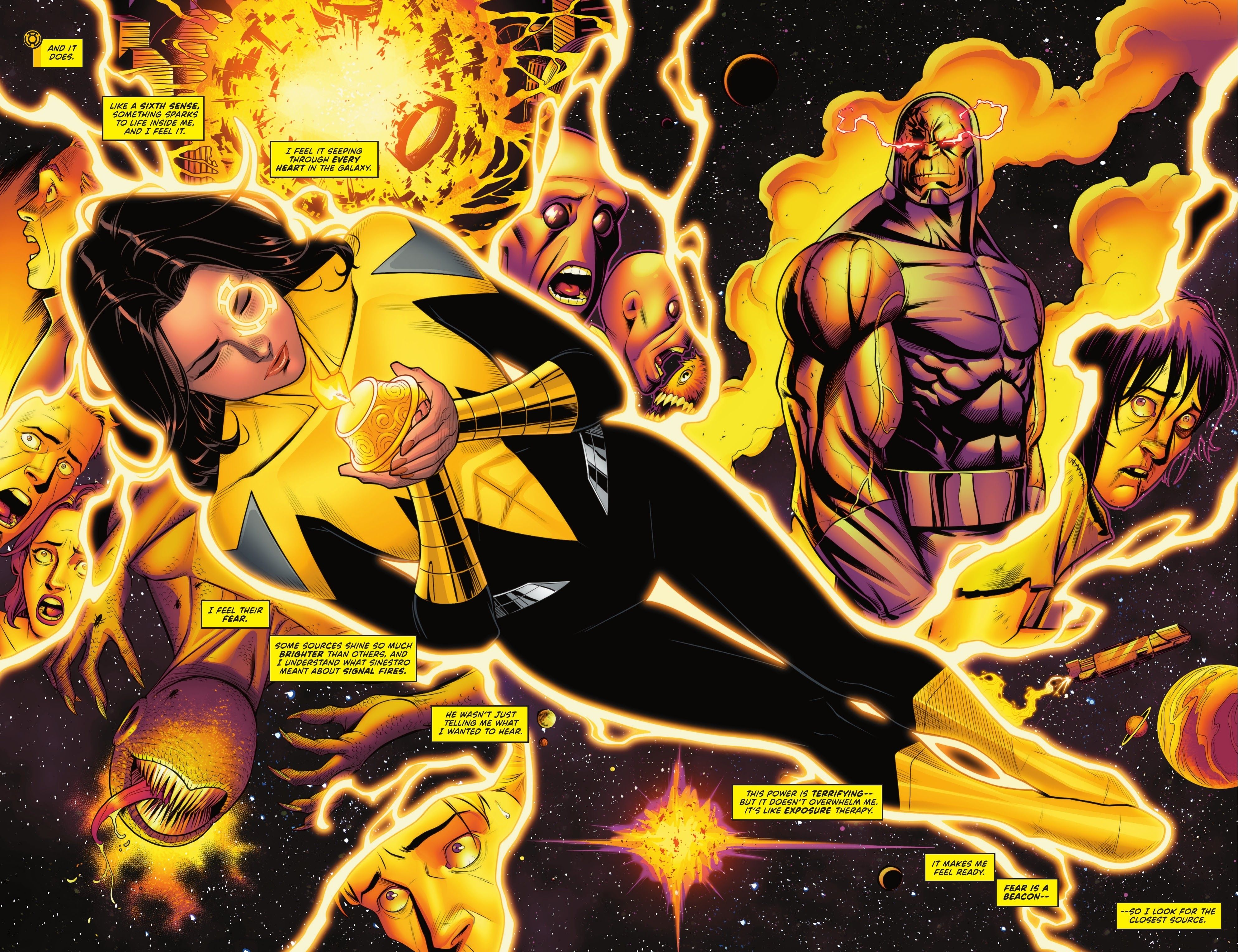 Using her new ring Jessica found the closest source of fear, finding a ship full of refugees in trouble. Using the power of a Yellow Lantern, Jessica motivated the crew to work on a solution, showing them what they feared more than death while also using small does to fear to unify the refugees, rather than leaving them to fight one another. That being said as if the point wasn’t strong enough that the Yellow Lanterns are misunderstood, Hal Jordan arrived and was appalled that Jessica was wearing a Yellow ring, believing her to have sided with the enemy (which naturally frustrated her).

While Sinestro certainly has his flaws and past sins, Jessica Cruz now understands the that light of the Yellow Lanterns itself is misunderstood, motivating her to keep the ring for a while longer to see what else she can do to help the galaxy. While it does come with an uneasy alliance with Sinestro, it is interesting that Jessica Cruz has seemingly found that embracing life as a Yellow Lantern is a better fit as opposed to her time as a Green Lantern.