The fiercest rivalry in Cobra Kai is Sam LaRusso vs. Tory Nichols. Their war of attrition kept boiling season 3 and may end tragically in season 4.

You Are Reading :Cobra Kai Theory Sam vs Tory Wont End Like Daniel & Chozen (Or Johnny) 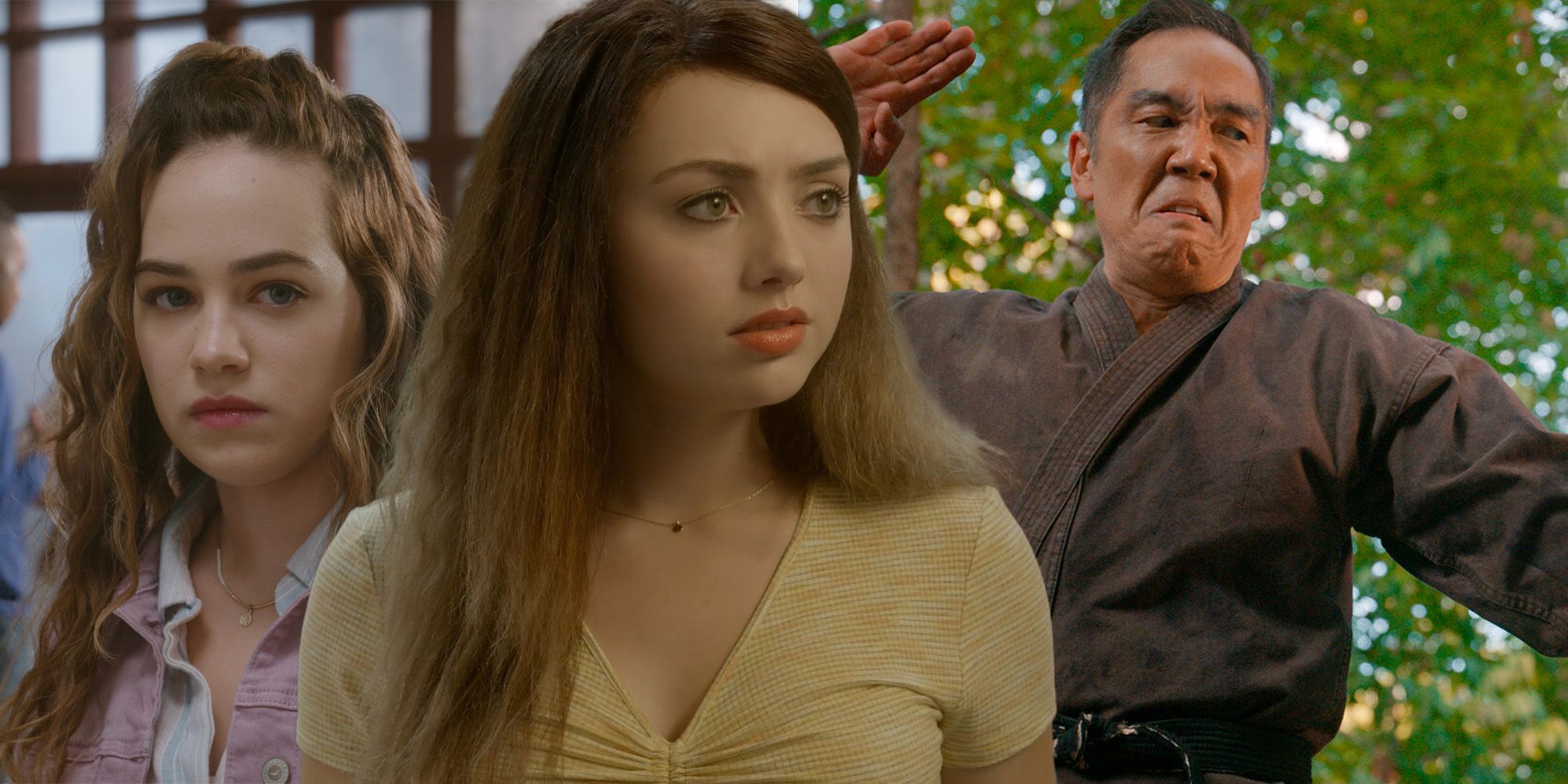 Of all of Cobra Kai’s rivalries, the most relentless is Samantha LaRusso (Mary Mouser) vs. Tory Nichols (Peyton List), and unlike Sam’s father Daniel’s (Ralph Macchio) grudges against Chozen Toguchi (Yuji Okumoto) and Johnny Lawrence (William Zabka), Sam vs. Tory has no truce or end in sight. In fact, Cobra Kai season 3 only escalated the animosity between Sam and Tory, which has become a war of attrition that may lead to a tragic end.

Of course, Sam vs. Tory is modeled after Daniel’s decades-old rivalries with Johnny and Chozen, and Daniel has been dealing with his rivals since the mid-1980s. However, Daniel made two major breakthroughs in Cobra Kai season 3: His return to Okinawa found him making peace with Chozen, who was penitent and turned a new leaf since he tried to kill LaRusso in The Karate Kid Part II. Chozen and Daniel-san parting as friends was made possible by Kumiko (Tamlyn Tomita), Daniel’s ex-girlfriend who arranged for the two to come face-to-face for the first time since 1985. Later in Cobra Kai season 3, another ex-girlfriend, Ali Mills Schwarber (Elisabeth Shue), got Daniel and Johnny to see that they have more in common than they thought. Cobra Kai season 3’s finale saw Senseis LaRusso and Lawrence join forces and combine their two dojos, Miyagi-Do and Eagle Fang Karate, against John Kreese’s (Martin Kove) Cobra Kai – a thrilling development longtime fans of The Karate Kid never thought they’d see.

However, the LaRussos just seem to naturally attract arch-enemies and this was true of Samantha. Despite not wanting to fight her friends, Sam instantly disliked Tory, who joined Cobra Kai in season 2, the second they met. In fact, Sam initiated hostilities; she was jealous Tory was hanging out with her best friend Aisha Robinson (Nichole Brown), who was also a Cobra Kai member, and LaRusso drew Tory’s ire when she accused Nichols of stealing her mother Amanda’s (Courtney Henggeler) wallet. The feud was on right there, and it was exacerbated throughout Cobra Kai season 2 when Tory started dating Sam’s ex, Miguel Diaz (Xolo Mariduena). But when Tory caught Sam kissing Miguel at a party, she saw red and called LaRusso out on the first day of school. Their showdown ignited the West Valley High brawl between Cobra Kai and Miyagi-Do that left Miguel hospitalized with life-threatening injuries, thanks to Robby Keene (Tanner Buchanan).

Matters between Sam and Tory didn’t cool down one iota in Cobra Kai season 3. In fact, while Hawk (Jacob Bertrand) saw the error of his ways and quit Cobra Kai to side with his oldest friend, Demetri (Gianna DeCenzo), Tory and Sam’s hatred only escalated. This is despite Sam suffering from PTSD from Tory slicing her arm bloody at the West Valley High brawl, which left her terrified of Nichols for most of Cobra Kai season 3. By Cobra Kai season 3’s finale, “December 19”, Sam and Tory’s animosity still wasn’t settled and it will continue in season 4. As bitter as Daniel and Johnny’s rivalry can be, Tory is really more like Sam’s version of Chozen the way he was in 1985 – Nichols simply hates LaRusso and wants her to meet a violent end. It’s hard to see how Sam and Tory can possibly reconcile and it’s likely they won’t ever make peace.

Sam And Tory Have Nothing In Common (Except Their Boyfriends)

Tory and Samantha are as opposite as they can be, and Nichols hates LaRusso because she sees her as a privileged “princess” who never had to fight for anything in her life. It’s true that Sam grew up affluent thanks to her successful parents while Tory leads a hard life; she’s the sole breadwinner of her family, and she’s responsible for taking care of her sick mother and her little brother. This means Tory works two jobs to make ends meet, and she’s got a chip on her shoulder that Sam lives a life of luxury in her big house with her cars and swimming pool. Tory also had to cope with her apartment building’s superintendent creeping on her until Kreese took care of that problem. Compared to Tory’s hard-knock day-to-day, Sam is indeed incredibly fortunate, since she has wealth and a loving family surrounding her.

However, the one thing Sam and Tory share is the same taste in boyfriends. When Tory started dating Miguel, he was on the rebound after Sam dumped him in Cobra Kai season 1. Diaz still carried a torch for Sam, which Tory was aware of, even when LaRusso was getting romantic with Robby. In Cobra Kai season 3, the game of musical boyfriends continued, with Sam and Miguel reconciling and getting back together. Meanwhile, Tory took an interest in Robby the same way Kreese did, and she was a big factor in getting him to join the ranks of Cobra Kai in the season 3 finale. But other than being seventeen-year-old girls, Tory and Sam are as diametrically opposed as any rivals in The Karate Kid/Cobra Kai saga. They also really hate each other; neither can find any positive about the other person; Sam is totally intolerant of hearing Miguel speak on Tory’s behalf and Nichols instantly dismisses Robby when he tries to defend LaRusso as a good person.

Cobra Kai season 3 only briefly touched upon what’s wrong with Tory when Miguel told her she needs help and she became furious that he thinks she’s “crazy,” but Nichols really does need to go to therapy. After all, a well-adjusted person doesn’t show up on the first day of school, commandeer the intercom to call out the girl who kissed her boyfriend, and then try to seriously injure – if not outright kill – her with an edged weapon while igniting a full-on karate brawl. Tory also had no issues whatsoever when Hawk broke Demetri’s arm (she even doubted Hawk had the guts to go through with it) and Nichols led Cobra Kai in a violent home invasion where they trashed then LaRussos’ home and she tried to injure Sam with nunchucks.

The flashbacks to Kreese’s origin in Cobra Kai season 3 shed light on why the ex-Special Forces soldier-turned-sensei is such a twisted sociopath. In Tory, he found a teenage girl who willingly subscribes to and embodies his philosophy that the world is out to get you so you have to show anything that opposes you “no mercy”. As a result of her actions at West Valley, Tory was immediately expelled and it’s hard to see what kind of positive future she could have, even if she gets her G.E.D., unless she changes her ways. But for that to happen, Tory needs to seek some professional help and get away from Kreese, but that doesn’t seem to be a likely direction for her the way Cobra Kai set up season 4. Unlike Chozen was with Daniel, Tory is thoroughly unrepentant and wants to finish Sam off for good (whatever that means).

Sam Vs. Tory Could End In Tragedy

Sam and Tory is an ongoing issue and the arch-enemies are destined to collide once more in Cobra Kai season 4. In all likelihood, Nichols and LaRusso are going to face each other at the 2019 All Valley Under 18 Karate Tournament, which will be the first for both. This will be a safer and more controlled scenario than their ultraviolent showdowns to date, but The Karate Kid films have shown that unsportsmanlike violence and injuries can easily occur at the All Valley, regardless of the rules and the referees. Tory is a highly skilled and dangerous fighter, and she’s arguably the most naturally proficient athlete on Cobra Kai’s roster. This means Nichols is a favorite to win the All Valley, but if she loses – especially to LaRusso, who is, herself, a disciplined and talented karate kid and she is also part of a championship legacy at the All Valley – Tory may go nuclear.

As Tory threatened Sam in Cobra Kai season 3’s finale, “It’s not over! This will never be over, you hear me?” and she means it. Comparatively, Daniel and Chozen had 30 years apart where Toguchi was able to completely change, and they have the fact that they are both Miyagi-Do senseis in common. Similarly, Johnny and Daniel have too much history and a lot of shared traits, as Ali was able to make them realize. But Sam and Tory have nothing that could potentially bond them or force a truce, and, as a die-hard follower of Kreese, Nichols has already shown she isn’t above pursuing criminal acts to get at Samantha. Cobra Kai season 2’s ending shocked fans by Miguel getting injured (and it even seemed like he died, at first). Alarmingly, Sam vs. Tory is the one rivalry in Cobra Kai season 4 that has the potential to push even further and it could lead to the ultimate tragic ending for either Sam or Tory before their rivalry can truly be over.