One Grand Theft Auto 5 player mods a deer into Rockstar Games’ open world title as the main character and lets fans watch as it roams the streets of Los Santos. 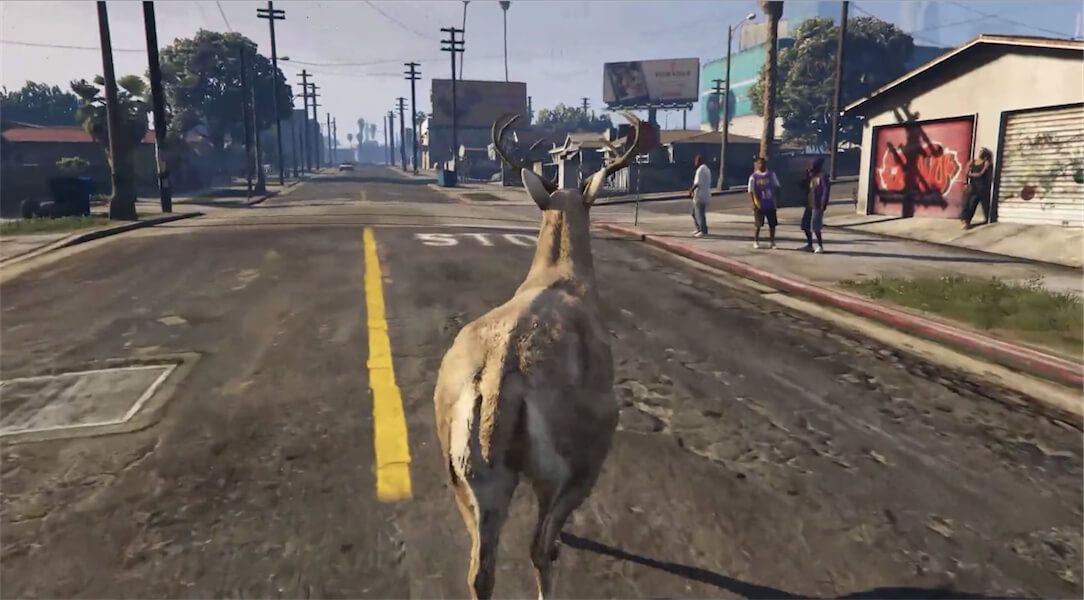 One Grand Theft Auto 5 player mods a deer into Rockstar Games’ open world title as the main character and lets fans watch as it roams the streets of Los Santos.

With the use of mods and video game recording equipment, Grand Theft Auto 5 fan and interdisciplinary artist Brent Watanabe has created the San Andreas Streaming Deer Cam, which features a deer from the wilderness trotting across the entirety of the game’s landscape. Whether it’s walking through wooded glens, sprinting on highly populated sidewalks, galloping into the middle of the street during rush hour, or invoking the wrath of gang violence, Watanabe’s pet project goes buck wild all throughout Grand Theft Auto 5’s environment.

As it happens, the mod causes the actual protagonist in the game itself be replaced by the deer, which runs autonomously and interacts and responds to every piece of programming within GTA 5, whether it’s the title’s infrastructure or artificial intelligence, as it moves across the fictional world of Los Santos. Additionally, just so the footage won’t become too boring or tedious, the deer will occasionally teleport to different areas of the city every few minutes.

Those interested in watching the deer roam around in Grand Theft Auto 5 can check out the video found below. To get an even better understanding of the how the mod works, though, Watanabe explains it in more detail, saying:

“The deer has been programmed to control itself and make its own decisions, with no one actually playing the video game. The deer is ‘playing itself’, with all activity unscripted… and unexpected. In the past 48 hours, the deer has wandered along a moonlit beach, caused a traffic jam on a major freeway, been caught in a gangland gun battle, and been chased by the police.”

While Brent Watanabe’s deer creation is definitely endearing, there are also plenty of other instances of modded material related to the wilderness that fans can encounter in Grand Theft Auto 5. One of the best choices, for example, is the goofy Animal Mod that turns the title’s protagonists in to different creatures such as monkeys, pigs, and even giraffes. Basically, installing the mod will allow fans to play as any animal in the game, unlike Watanabe’s mod, which only lets folks watch as an automated script causes mayhem.

Of course, GTA 5’s base game also contains an interesting Easter egg all of its own that is similar to letting fans run amok as a wild animal. Should players take it upon themselves to discover it, they’ll be able to unlock a playable Bigfoot in the game. Naturally, the mythical creature might not move as gracefully as Watanabe’s deer, but it still provides plenty of fun for those wanting something beyond the Grand Theft Auto 5’s typical offerings.

What do you think about Ben Watanabe’s deer mod for Grand Theft Auto 5? If you enjoyed it, which animal do you think should get the treatment next? Let us know your thoughts in the comments below.