You Are Reading :How Fallout 4s Visuals & Design Compare to Fallout 3 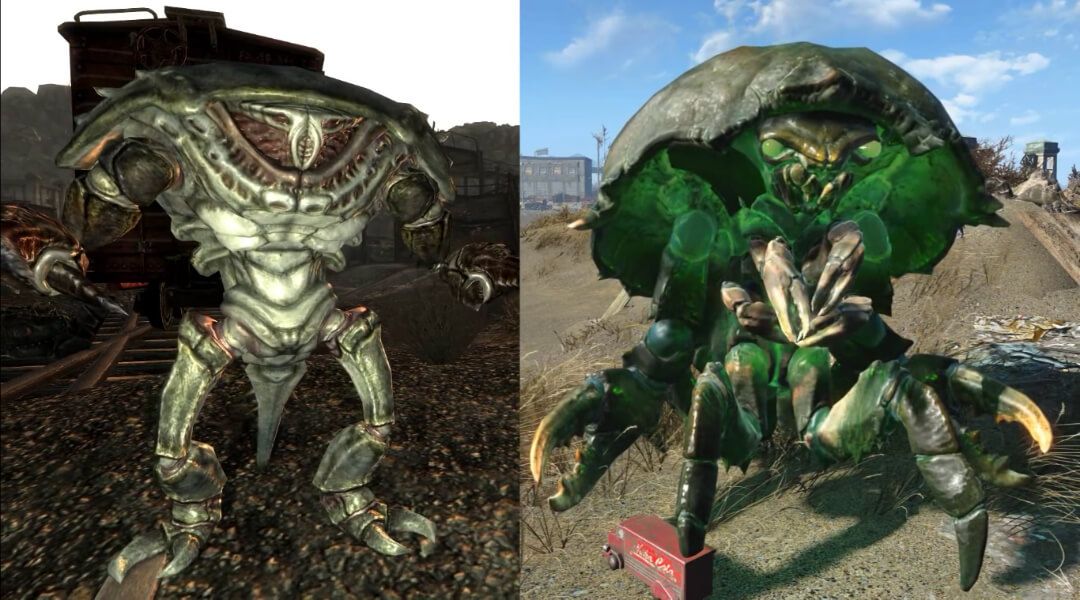 With seven years passing by between Fallout 3 and the release of Fallout 4, gamers were expecting major graphical improvements. After Bethesda released trailers showing off in-game footage, however, many complained that the game’s graphics didn’t look next-gen and that not much had improved since the last entry to the series.

Seen below, Arvuti highlights the differences between Fallout 3 and Fallout 4’s armor, people, monsters, and weapons. While Fallout 4 graphic mods have come out boosting the appearance even more, the base game is obviously superior to its predecessor in looks, lighting, and animations. It’s immediately obvious that Fallout 4 has a much deeper sense of scale, with power armor (admittedly, two different versions), super mutants, and monsters towering over their Fallout 3 counterparts.

Fallout 3 did a good job of using textures and bump mapping to create a sense of depth, since the developers had to cope with system limitations, also resulting in strange workarounds like the Fallout 3 train hat. Fallout 4 can use more system resources, and as such, Bethesda has actually modeled all the tiny nuances of character and creature models, making them more realistic. The advance in technology is also evident in how Fallout 4 renders fur, and lacks the greenish bloom lighting of Fallout 3. Other changes, like Fallout 4’s brighter skies and certain creatures looking entirely different is a design choice, most likely representing the 200 years that have passed in the story.

Fallout 4’s world and characters may not look as hyper-realistic as games like Metal Gear Solid V or the upcoming Final Fantasy XV, but it makes up for it in size and scope. Of course, it’s appearance is partially dependent on the system it’s being played on. PC players who are dissatisfied with the game’s look can undoubtedly expect more mods to further improve the appearance of Fallout 4.

While it initially received a lot of criticism for its appearance, Fallout 4’s reviews have been stellar. Add to that Fallout 4’s massive profits without a single microtransaction, and it looks like most people are plenty happy with the game.

What do you think about Fallout 4’s graphics after playing the game? Let us know in the comments.

Fallout 4 is now available for PC, PS4, and Xbox One.