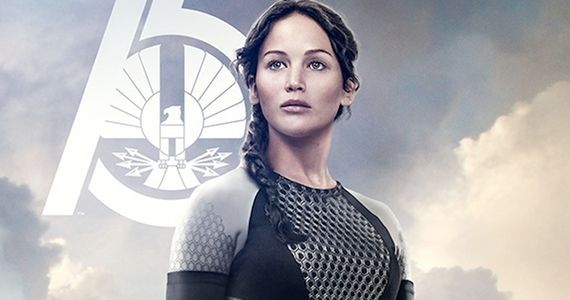 The Hunger Games: Catching Fire continues the saga of young Katniss Everdeen (Jennifer Lawrence), in the wake of her milestone Hunger Games co-victory alongside her fellow District 12 combatant, Peeta Mellark (Josh Hutcherson). As Katniss and Peeta try to re-aclimate to “normal” life, their former mentor, Haymitch (Woody Harrelson), warns them that in co-winning the games (a first in Panem history) Katniss and Peeta have in fact sparked open rebellion in the impoverished districts of Panem, thereby enraging the Capitol government and the despotic President Snow (Donald Sutherland).

Even though it was only alluded to in the first Catching Fire trailer, it’s no spoiler to tell you that President Snow concocts a way to send Katniss, Peeta – and many other alumni of previous Hunger Games – back into the arena for a “lesson” that will hopefully quell any further district uprisings. And today, we know just how Katniss and Co. will be dressed for battle, thanks to some new Catching Fire character posters.

“Quell” is an appropriate word to use, as, in the books, the 75th Hunger Games (which Katniss and her fellow survivors must fight in) is referred to as “The Quarter Quell.” Fans of the books know that this time around, the woodland battlefield of the first film is traded for a more maritime-themed arena, making the wet suit look of these Quarter Quell uniforms wholly fitting.

The posters come our way via various websites, featuring Katniss and Peeta (via Yahoo); Johanna Mason (via MSN); Finnick and Mags (via Empire); Wiress and Beete (via MTV); Brutus and Enobaria via (Moviefone); and Cashmere and Gloss (via The LA Times).

More open to debate is the look of both the characters and their outfits. As to the latter: people were pretty critical in their comparisons of The Hunger Games and films like Battle Royal and/or The Running Man – and in the case of Running Man, in particular, the comparisons (and criticisms) are only going to get worse, judging from the look of those outfits.

As for the characters: some of the actors certainly seem to fit the part (Jena Malone as Johanna; Lynn Cohen as Mags), while other actors (Sam Claflin as fan-favoirte Finnick Odair) are likely going to keep hardcore fans grumbling and mumbling until the actor has a chance to prove him/herself when the movie is in theaters. For my part, I’m always happy to see an actor of Jeffrey Wright’s caliber in just about any film he’s a part of – but truth be told, he looks nothing like what I imagined Beetee to be when reading the book, so I find myself strangely at odds with this particular casting choice. How do YOU feel about the characters and costumes in the posters?

The Hunger Games: Catching Fire will have a big presence at the 2013 San Diego Comic-Con; Yahoo will also be debuting a trailer for the film right after said trailer premieres during the Catching Fire Comic-Con panel. Stay tuned!

The Hunger Games: Catching Fire will be in theaters on November 22, 2013.

Kofi Outlaw (former Editor-in-Chief, 2008 – 2016) has a B.A. in writing and film studies. He then earned a Masters Degree in creative writing from The New School in NYC, where he first stumbled upon Screenrant.com when it was just a hobby blog owned by Vic Holtreman. Kofi recognized potential in Screen Rant as an outlet capable of bridging die-hard film fans and casual moviegoers, quickly rising to the position of E-i-C, and working with the rest of the editorial team, transformed Screen Rant from a hobby blog into one of the leading fan sites on the Internet. Since his time at Screen Rant, Kofi has continued to work in entertainment journalism – joining comicbook.com as Sr. Editor of Original Content. Contact and follow Kofi on Twitter @kofioutlaw.