NFC North winners and losers from the 2022 NFL draft 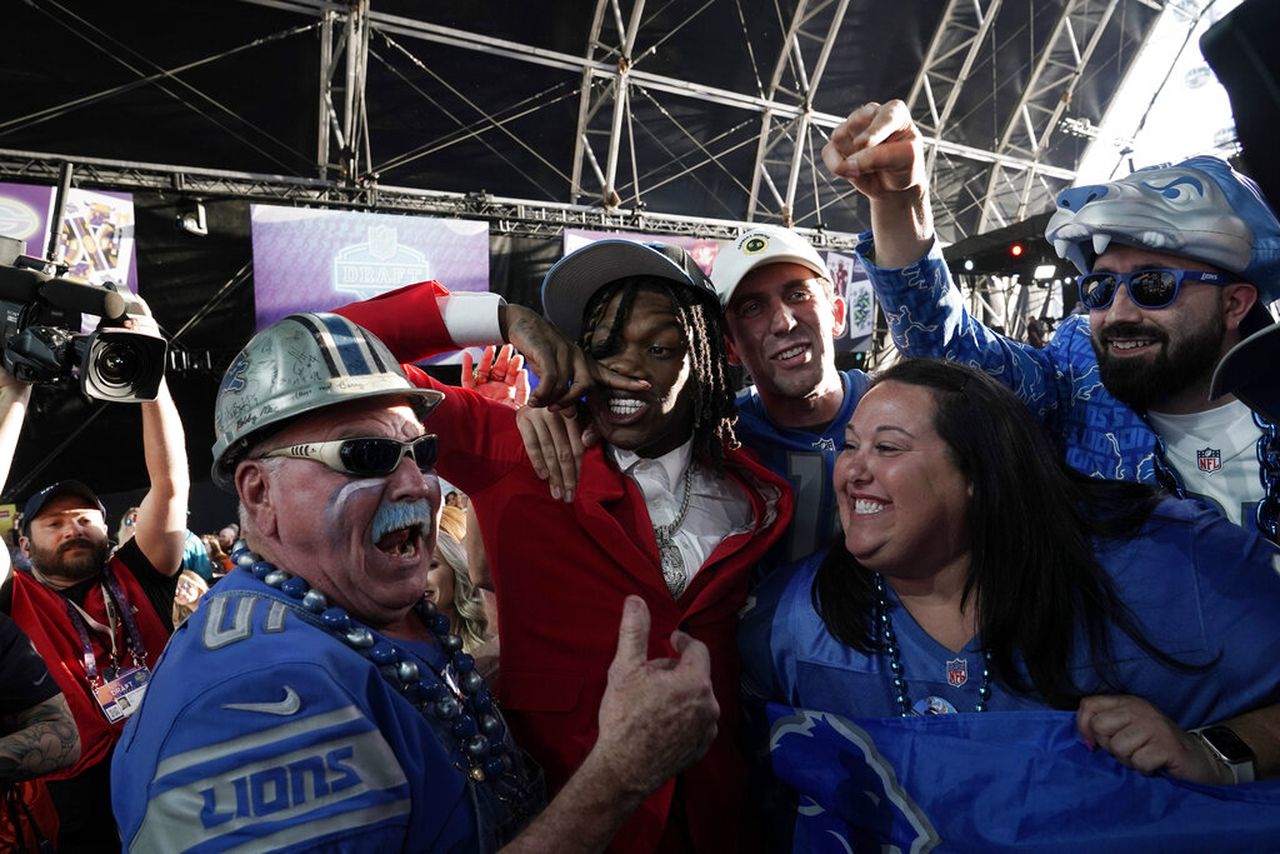 Alabama wide receiver Jameson Williams (in red) celebrates with Detroit Lions fans after the team picked him in the NFL Draft on Thursday, April 28, 2022, in Las Vegas.(AP Photo/Jae C. Hong)

It’s time to start dissecting the 2022 NFL draft with an eye toward the NFC North.

The Green Bay Packers loaded their defense while grabbing two intriguing receiver prospects for Aaron Rodgers. There is no replacing Davante Adams, especially in Year 1. But Christian Watson and Romeo Doubs add some juice and upside to that room.

Chicago was forced to move around and load up on late-round picks to fill its roster after trading up for Justin Fields last year. The Lions grabbed arguably the top player in this draft in Aidan Hutchinson, then got aggressive to get the speedy Jameson Williams. It’s also hard to argue with Minnesota’s additions to its defensive backfield in Lewis Cine and Andrew Booth.

Let’s get into it:

Green Bay Packers and QB Aaron Rodgers: I’m sorry, it’s hard not to like Green Bay’s draft even if you’re lower on receiver Christian Watson than most. Because even if that’s the case, Romeo Doubs is a likable receiver prospect. Watson is a 6-foot-4 wideout with some of the combine’s most impressive athletic testing. Doubs leaves Nevada with two consecutive 1,000-yard seasons and 20 touchdowns through his last 20 games. The Packers missed out on the first six receivers in the draft, then made the most of the board.

Even with that said, the Packers are winners for how they built around their defensive pieces. Devonte Wyatt gives them a versatile option that should be able to move around in their three-person defensive fronts, beefing that rotation in Year 1. Quay Walker pairs well with All-Pro linebacker De’Vondre Campbell. Walker is a 6-foot-3, 241-pound linebacker that moves with the best of them. He ran a 4.52-second 40-yard dash. It’s hard to disagree with taking two studs from Georgia’s historic defense on Day 1. They also grabbed Sean Rhyan and Zach Tom, two potentially high-upside offensive linemen. The Packers also got one of the better bargains of the draft in South Carolina edge defender Kingsley Enagbare.

Detroit Lions and defensive coordinator Aaron Glenn: Brad Holmes picked six defensive players, the most in franchise history of the seven-round era. That should be an exciting development for Lions fans after watching Aaron Glenn get the most out of last year’s injury-riddled and thin group. Aidan Hutchinson gives this team a potentially elite pass rusher on the edges with the formidable Romeo Okwara and Charles Harris. Holmes then threw two more bodies at that room, grabbing versatile defender Josh Paschal and Jackson State pass rusher James Houston. As things stand, they also have recent mid-round picks Austin Bryant and Julian Okwara back in town. Houston is one to watch. The Florida transfer moved from linebacker to the edge and then delivered elite production. He had 70 tackles, including 24.5 for a loss, 16.5 sacks, seven forced fumbles, two fumbles recoveries and an interception and was named an FCS All-American at Jackson State.

And while the linebacker room didn’t get any attention until the sixth round. The Lions were wise to grab Illinois safety Kerby Joseph in the third round. Joseph fits nicely here, potentially giving the defense something they desperately needed in a ball-hawking safety. Joseph and his 6-foot-8 wingspan had five interceptions last season.

The Minnesota Vikings and their fully-stocked defensive backfield: The Vikings made some impressive moves to solidify that defensive backfield for the future. New general manager Kwesi Adofo-Mensah grabbed Georgia safety Lewis Cine (Pick 32), Clemson cornerback Andrew Booth (Pick 42) and Missouri cornerback Akayleb Evans (Pick 118). Cine was a favorite prospect around these parts, and now he gets to work with All-Pro veteran safety Harrison Smith. Booth was widely regarded as a late first-round prospect, and now he gets to work with All-Pro veteran cornerback Patrick Peterson. The Vikings did well by pairing rookies in veteran-topped defensive rooms, even adding Oklahoma linebacker Brian Asamoah in the third round. They moved around and added picks, but made the most of their first two with Cine and Booth.

Lions QB Jared Goff: Detroit didn’t draft a quarterback while getting Jared Goff an electric playmaker in Jameson Williams. Holmes and the Lions were focused on giving the quarterback the best chance to win in 2022 while leaving the long-term door open. This is what always felt like the likely scenario around these parts.

Goff finished last season on a high note. And now, he’s staring down an opportunity to start behind one of the league’s top offensive lines, with a much-improved wide receiver room. T.J. Hockenson and D’Andre Swift are back too, and as the Dungeon of Doom podcast has been saying for months, this Lions offense is much closer to being better than people think. Goff had his best season back in 2018, developing a lethal connection with Brandin Cooks. He might not be known for his deep ball, but he’s proven he knows how to use those electric gamebreakers. Now, Goff has blossoming young receiver Amon-Ra St. Brown. DJ Chark gives the team another deep threat and potential go-to receiver. Hockenson and Swift are proven commodities. And if Jameson Williams looks anything like he did before the ACL injury? This offense could surprise.

Chicago Bears and QB Justin Fields: The Bears seemed more interested in trading and acquiring Day 3 picks than finding quarterback Justin Fields some help. They swung four Day 3 trades on Saturday. What’s that mean? They traded down for quantity and swings for the fences lower in the order. The quantity side of that makes sense. They were in a tough spot after the previous regime traded draft capital to move up for Fields last year. Chicago didn’t have a first-round pick, and that roster needs help entering the rebuild. Matt Eberflus and new general manager Ryan Poles looked to infuse the roster with their own. With that said, some of those swings are really solid prospects. It’s just that you’re banking on later-round picks.

Southern Utah tackle Braxton Jones is one of those names to watch. His elite length and marks against the run were some of the best. Jones displayed a level of burst from his stance that is easy to fall for late in the draft. But he’s looking at making the jump to the next level from a smaller school. Doubling up with San Diego State tackle Zachary Thomas one year after taking Teven Jenkins gives them more options. Velus Jones Jr. is a speedy wideout that will help after the catch. He’s not that refined and will also be a 25-year-old rookie. This one is more about who they passed on — George Pickens, Christian Watson and the speedy Calvin Austin III, among others. We’ll see how it turns out. Dazz Newsome was a sixth-round pick last year, so maybe they’re high on him. They lost top receiver Allen Robinson. That pushes Darnell Mooney and Byron Pringle to lead the room.

Chicago’s offensive line and receiver depth remain its greatest concerns. They are also re-working that defense after departing with several longstanding pieces. That’s a tough draw for a second-year quarterback. This draft should have focused on making life easier for Justin Fields.

NFC North offensive lines: Even some of the mid-and later-round edge rusher additions in this division seem to have some serious juice. New Lions pass rusher Aidan Hutchinson is the name that jumps off the screen, as it should. Last season, he had 14 sacks and 66 pressures, including 15 against Ohio State. Then the Lions added Josh Paschal in the second round. Paschal, called a “leverage demon” by PFF, had 15 tackles for loss and five sacks in 2021. Houston is an intriguing prospect, with elite production at the FCS level in his first season at edge defender.

Green Bay added Wyatt and Enagbare. Wyatt was Georgia’s top-graded defensive lineman last year, and he does a little bit of everything well. He’s quick, bends well and packs enough punch to move up and down the team’s line. Wyatt and Quay Walker’s ability to fly around should make life even easier for Rashan Gary and two-time Pro Bowler Kenny Clark. The Bears added Miami (Ohio) pass rusher Dominique Robinson. They traded Khalil Mack away and are missing some of the defensive punch the team is used to deploying. Robinson is a converted wide receiver who has been playing defense for only two years. He will be a 24-year-old rookie, but he flies off the ball. Robinson brings a 4.72-second 40-yard dash, with elite showings in the split and shuttle, adding a ridiculous 41-inch vertical.

Detroit’s linebacker room: Malcolm Rodriguez is a very likable linebacker prospect. He’s not going to wow you in coverage, and those size concerns are legitimate. He’s also a sixth-round pick. It’s difficult to ignore how badly this team needs an upgrade at linebacker, mainly in a starter-level body, whether they’re ready to admit it.

Maybe Rodriguez is that person down the line. His ability to chase people down and clog running lanes is badly needed. His size concerns and draft position lead one to believe that he’ll have to be an overachiever to make that happen. Alex Anzalone is the top linebacker in the room. He’s a team-voted captain, and with Jarrad Davis back from a one-year stint with the Jets, one of the veteran leaders in that room. But both of those players have struggled on the field throughout their careers. Anzalone missed 21 tackles in 14 games per PFF last season. That was the third-most among all linebackers, even with the three missed games. The analytics site had Davis, Anzalone and Derrick Barnes ranked among the 21 worst linebackers in the league in 2021.

This year’s quarterback class: There was some pre-draft buzz this quarterback class would tempt the Lions or Vikings. That didn’t happen. Minnesota even traded back (several other times, too) to Picks 32 and 34, where the value and fifth-round option were on the table and said “no thanks.” Malik Willis, Desmond Ridder and Matt Corral were on the board until Round 3. Sam Howell lasted until Day 3. The Lions did the same through Day 2, so everyone on the outside was wildly wrong on this year’s ho-hum quarterback class. Only one quarterback went in the first 73 selections (Kenny Pickett to Pittsburgh at Pick 20).

“I thought that they were taken where we thought they should have been taken, at least from our standpoint,” Holmes said. “I didn’t see it as they were being mistreated or not being taken fairly. I think they were evaluated properly.”

Note to readers: if you purchase something through one of our affiliate links we may earn a commission.

© 2022 Advance Local Media LLC. All rights reserved (About Us). The material on this site may not be reproduced, distributed, transmitted, cached or otherwise used, except with the prior written permission of Advance Local.

Community Rules apply to all content you upload or otherwise submit to this site.