Very scary and creepy, but very similar to The Ring. In most aspects, The Ring is a better movie.

You Are Reading :The Grudge Review 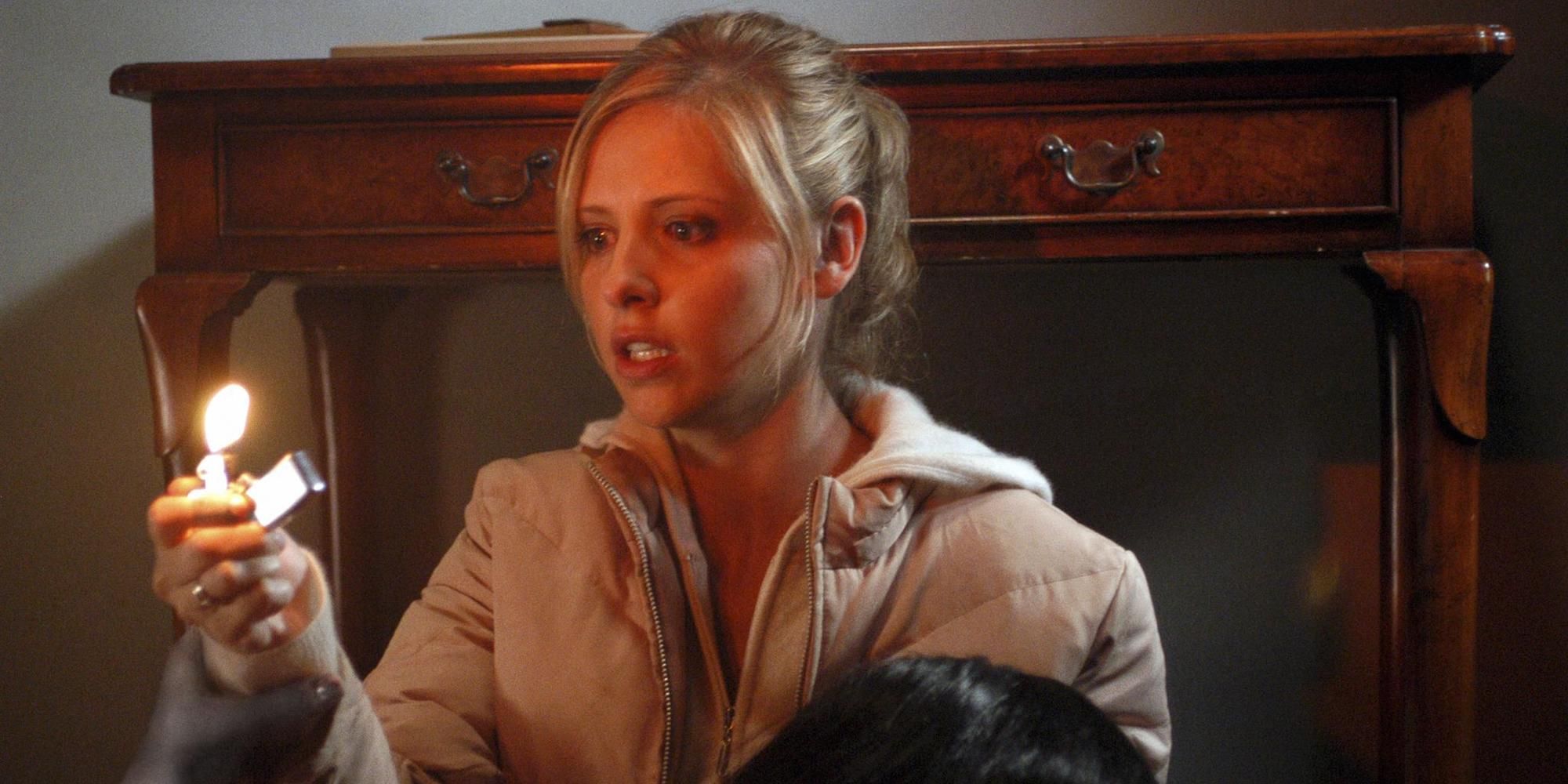 Very scary and creepy, but very similar to The Ring. In most aspects, The Ring is a better movie.

Didn’t I already see this movie two years ago, and wasn’t it called The Ring? And wasn’t the female lead a much better actress? Okay, granted, there are quite a few differences between The Ring and this one, but at least to me, they seemed only superficial. In The Ring, bad things happen when people see a certain VHS tape; in The Grudge, bad things happen when people set foot inside a certain house. The Ring was based on the Japanese film Ringu; The Grudge was based on the Japanese film Ju-On: The Grudge (click on the link for a review). The Ring has a headstrong female lead who manages to stay alive while everyone else dies; ditto for The Grudge. About the only obvious difference is that The Ring was set in the state of Washington, while The Grudge is set in Tokyo, Japan. (If you believe all the TV shows and movies, Tokyo is the only city in Japan. That’s unfortunate, considering that Tokyo ranked #1 in a recent survey of the world’s most expensive places to live.)

The film opens with graphics that explain the premise behind what “The Grudge” is. When someone dies in the grip of a powerful rage, a curse is born. All those who encounter this curse are killed and the curse is reborn, passed on from victim to victim in an endless chain of horror, blah blah, whatever… (I’m pretty sure I didn’t quote that verbatim.) After that, the first few minutes are promising, but things go somewhat downhill from there. (Come to think of it, even the terrible Swordfish had an excellent opening sequence.) Before the opening credits have finished rolling, two disturbing things have happened to grab our attention: Professor Peter Kirk (played by Bill Pullman) kills himself by jumping off his apartment balcony in front of his wife, and in another part of town, an invalid’s assistant named Yoko (played by Yoko Maki) goes up into the attic to find out what’s making all those strange noises. She finds out, all right… more on that later.

Sarah Michelle Gellar plays Karen, who moved to Japan to be with her boyfriend Doug, who is going to school there. As part of her studies, she is a volunteer at the school’s Care Center. The person assigned to an elderly woman’s house didn’t show up, so Karen’s boss Alex (played by Ted Raimi) sends her over there to substitute until he figures out what happened to Yoko (yep, the same Yoko from the previous paragraph). Almost as soon as Karen sets foot in the house, she knows something is not right. Just one example: she opens a taped-up closet to find a young Japanese boy and a cat. Since the woman who lives in the house is American and all her kids are grown adults, Karen suspects that the boy and the cat might not belong in that house. (Good guess.) She immediately calls Alex and tells him they may have a child abuse case on their hands, but before Karen can worry about anything else, a ghostly figure comes down from the ceiling and starts paying extra special attention to Emma, the elderly invalid. By the time Alex shows up, Emma is dead and Karen is sitting in the corner of the room looking shell-shocked. The cops show up, and they find even more fun surprises in the attic. I must say, one of the biggest horror-movie clichés is that the bad guys / evil forces / whatever never seem to bother the cops when they’re investigating. This movie is a little different in that regard. 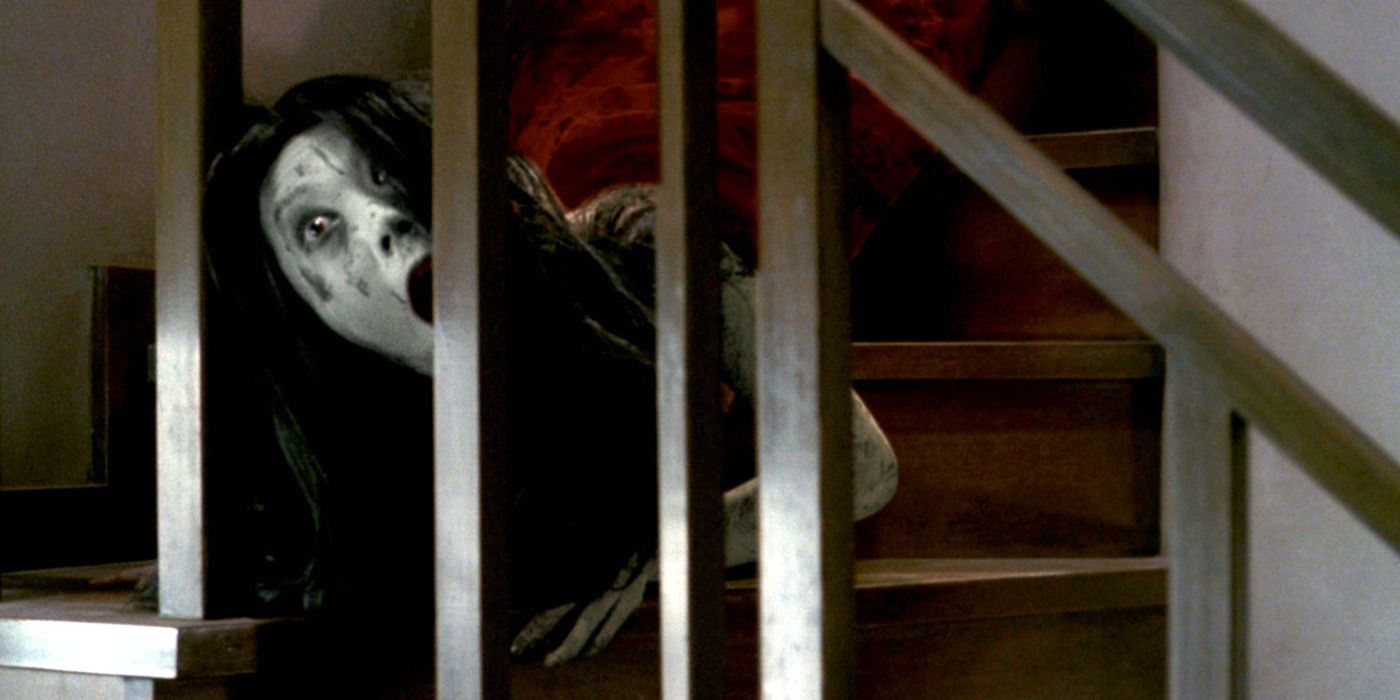 After a short stay in the hospital, Karen decides to do some research to see if she can figure out what the heck happened in that house — and why. She discovers that the previous occupants of the house died quite violently, effectively creating a curse on that house that passes to anyone who sets foot in it. She also discovers a link between that family and Professor Peter Kirk, who killed himself at the beginning of the movie. She now has to figure out how to rid herself of the curse (which is starting to catch up to her in some very non-subtle ways), as well as protecting other people from picking up the curse themselves. (Example: Wanna guess whether her idiot boyfriend decides to visit the house on his own?) Does she save the day and still pass all her classes without breaking a nail? Does she kill the vampires and help Shaggy and Scooby capture the hotel proprietor who is dressed up as a monster? Does she know what you did last summer? So many questions…

What frustrated me most about this movie was how some of the plot points were bizarre and/or downright confusing. The little boy who is discovered by Karen meows like a cat. Why? What’s the significance of that? We never find out. Some people who are killed by “The Grudge” ™ die somewhat peacefully; others meet with gruesome deaths. Some people’s dead bodies are left behind to be found; others just disappear and are never found. What determines how someone dies and whether the dead body will be discovered? We never find out. And the list goes on… I won’t give away any crucial plot points, but the scene where Alex finds out what happened to Yoko was really shocking. I was surprised that a movie could show something like that and still get away with a PG-13 rating. Times have changed, I guess…

I should point out that the movie’s timeline jumps around; there is quite a bit of backstory that is revealed in the middle of the movie before resuming the actual storyline. I didn’t find it confusing or out of place; it was just different. This movie’s biggest weak spot was Sarah Michelle Gellar. She just didn’t seem right for the role. She has a “deer in the headlights” look that makes it obvious that she’s trying to act, as opposed to naturally fitting into the role. For an Emmy winner, she’s really not that good of an actress. She has the whole angst thing down pretty well, but genuine emotion seems out of reach for her. Naomi Watts’ performance in The Ring was much better. Aside from Gellar’s weak performance and Jason Behr’s essentially wasted role as Doug, the acting performances were quite good. I was pleasantly surprised to see William Mapother play a clean-cut good guy for a change.

So overall, do I recommend this movie? That depends on a few things. First, if you don’t like scary and/or creepy movies, steer clear of this one (obviously). If you have small children, don’t let them see this (or anything similar). The biggest problem, though, is that it seems like a rip-off of The Ring, which is why I couldn’t rate the movie strictly on its own merits. People who have already seen The Ring are likely to leave the theater feeling unsatisfied. Writer/director Takashi Shimizu (who also wrote and directed the original) does a decent job of setting the mood of the film and (to a lesser extent) developing the storyline, but to be so similar to a movie that came out only two years ago… it’s a tough obstacle to overcome. Still, it’s obvious that most American moviegoers don’t agree with me, because The Grudge has made $100 million so far (and counting) in comparison to an estimated $10 million budget. In today’s climate, those numbers practically scream for a sequel to be made. With a sequel to The Ring scheduled for release next spring, it looks like we may have another “endless chain” of horror in the theaters.