Dwayne Johnson and Vin Diesel have had one of the most infamous beefs in Hollywood. Here is a complete timeline of the Johnson-Diesel feud. 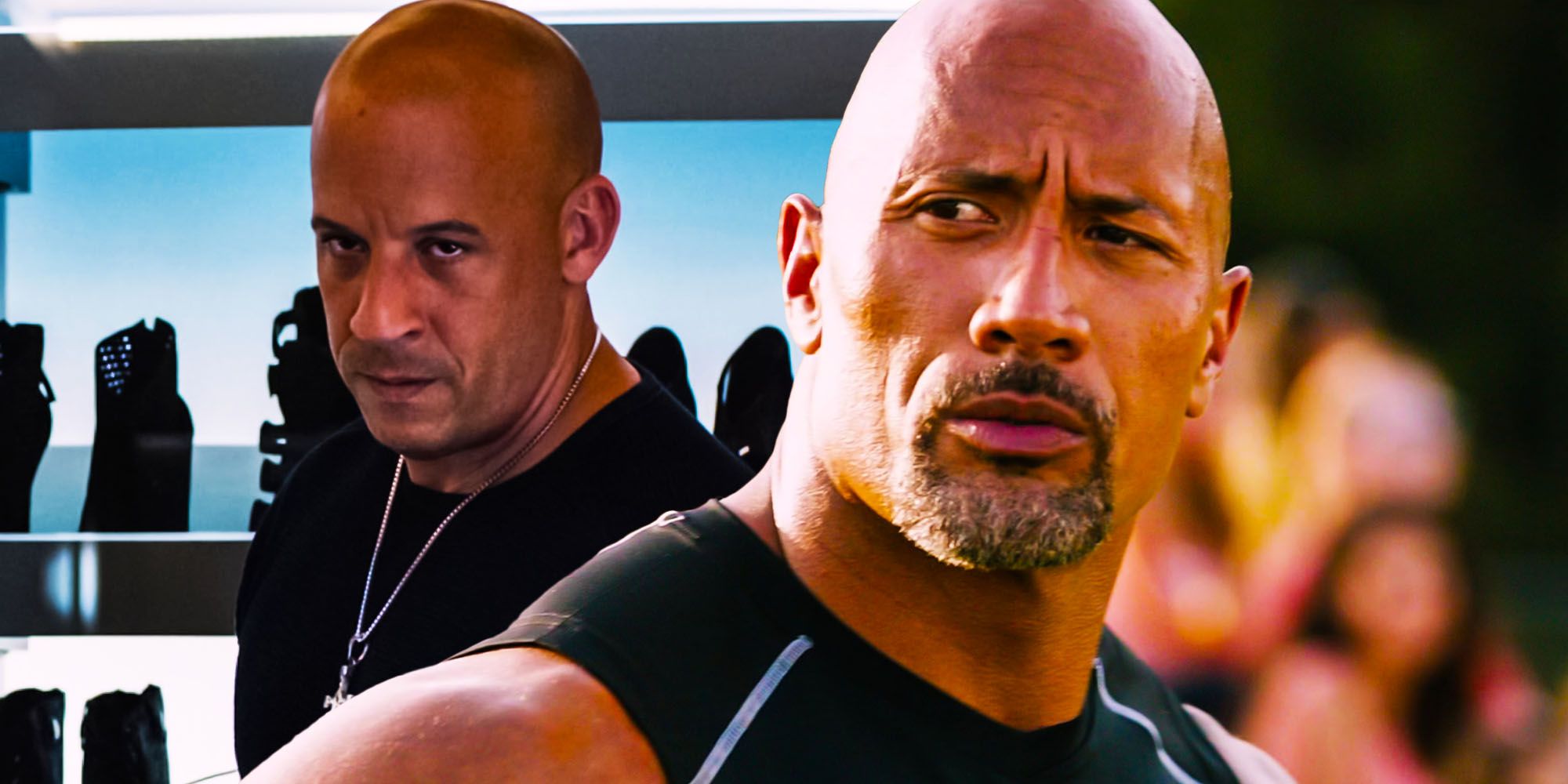 Dwayne “The Rock” Johnson and Vin Diesel are allies in the Fast & Furious franchise — but despite the franchise’s focus on brotherhood and family, Johnson and Diesel have been locked in an off-screen feud for years. The pairing of these two action megastars should have been the perfect recipe for filmmaking chemistry — however, these two massive personalities have struggled to get along over the years. Here is the complete timeline of Dwayne Johnson and Vin Diesel’s feud.

Now, with the franchise coming to a close, the feud between Diesel and Johnson is making headlines once again. Despite attempts from fans and co-stars alike, it seems Johnson has no interest in starring in Fast & Furious 10. The beef between The Rock and Vin Diesel is one of the most infamous in Hollywood — the pair are two of the most highly-paid actors in the industry, after all — and while it may have cooled off since their days filming together, the pair might never be the brothers that Diesel desperately wants them to be. 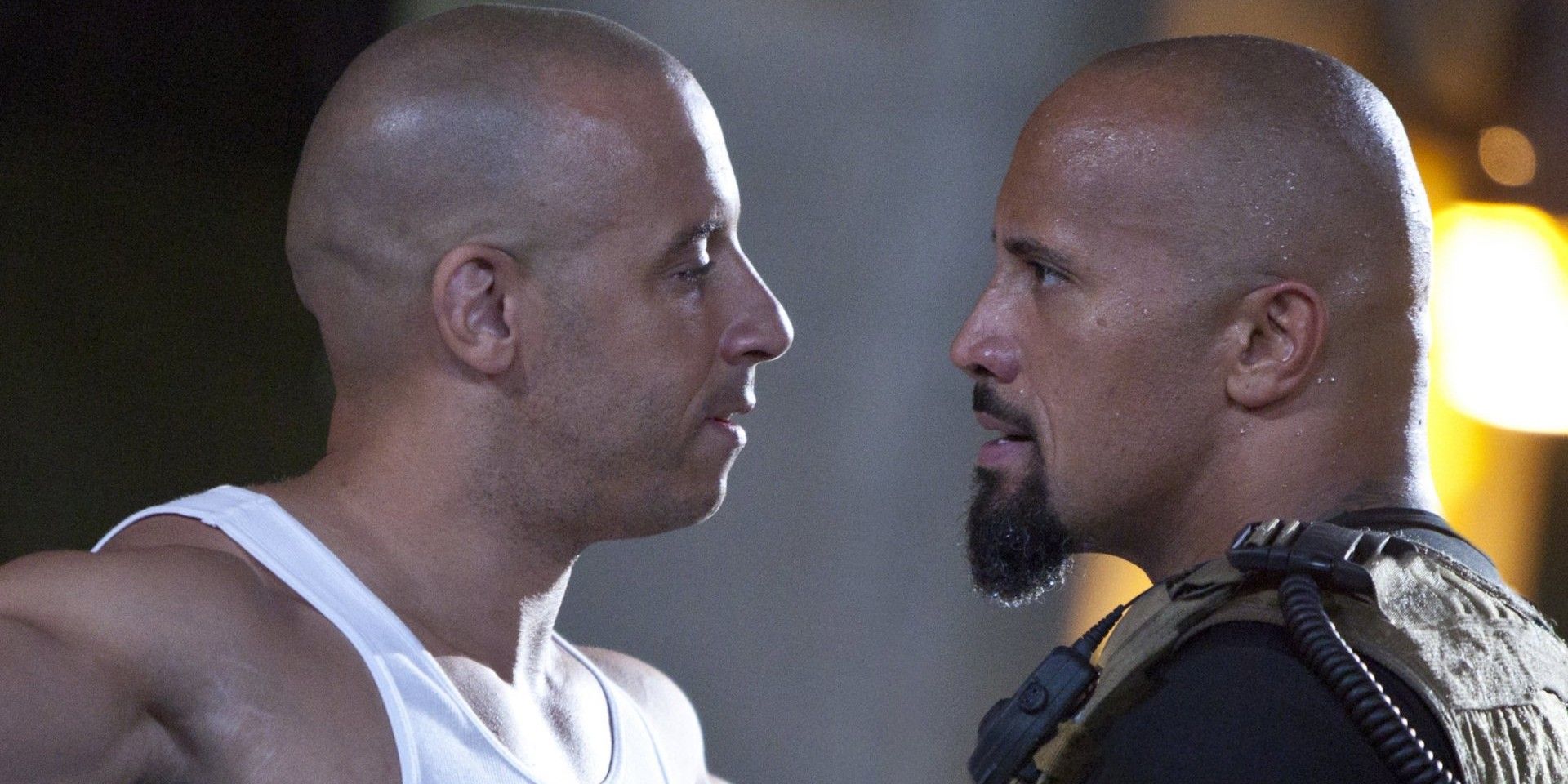 The first signs of a rift between Diesel and Johnson popped up in an August 8, 2016, Instagram post from Johnson. The post — which has since been deleted — praised his female co-stars while criticizing some of his male co-stars, claiming that they didn’t conduct themselves as stand-up men and referring to them as “candy asses.” No names were included in the post, but rumors circulated that the post was targeted at co-star Vin Diesel. In Johnson’s post (via Instagram) celebrating the end of filming for The Fate of the Furious, the star attempted to diminish the growing tensions, attributing it to the fact that “family is gonna have differences of opinion and fundamental core beliefs,” and that “like any family, we get better from it.” Diesel mostly avoided the social media drama, only once claiming that he was going to “tell everything” on Instagram — which, ultimately, never happened. 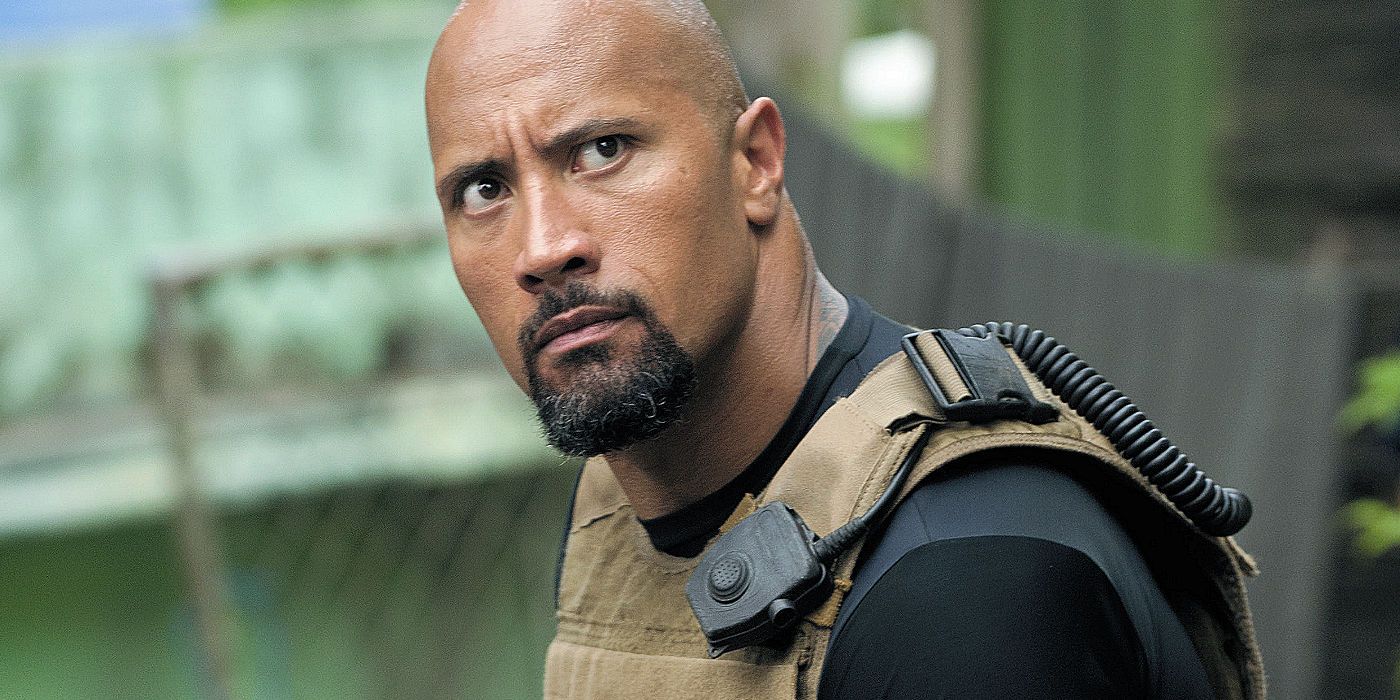 While promoting the upcoming release of The Fate of the Furious and his recent casting in Moana, The Los Angeles Times asked Johnson about his growing feud with co-star Vin Diesel. Johnson doubled down on what he said the month previous, explaining that he was “very clear with what I said.” Johnson even attempted to put a positive spin on his feud with Diesel, claiming that interest in The Fate of the Furious skyrocketed after his feud with Diesel was publicized — even if Universal would have preferred the incident never happened. 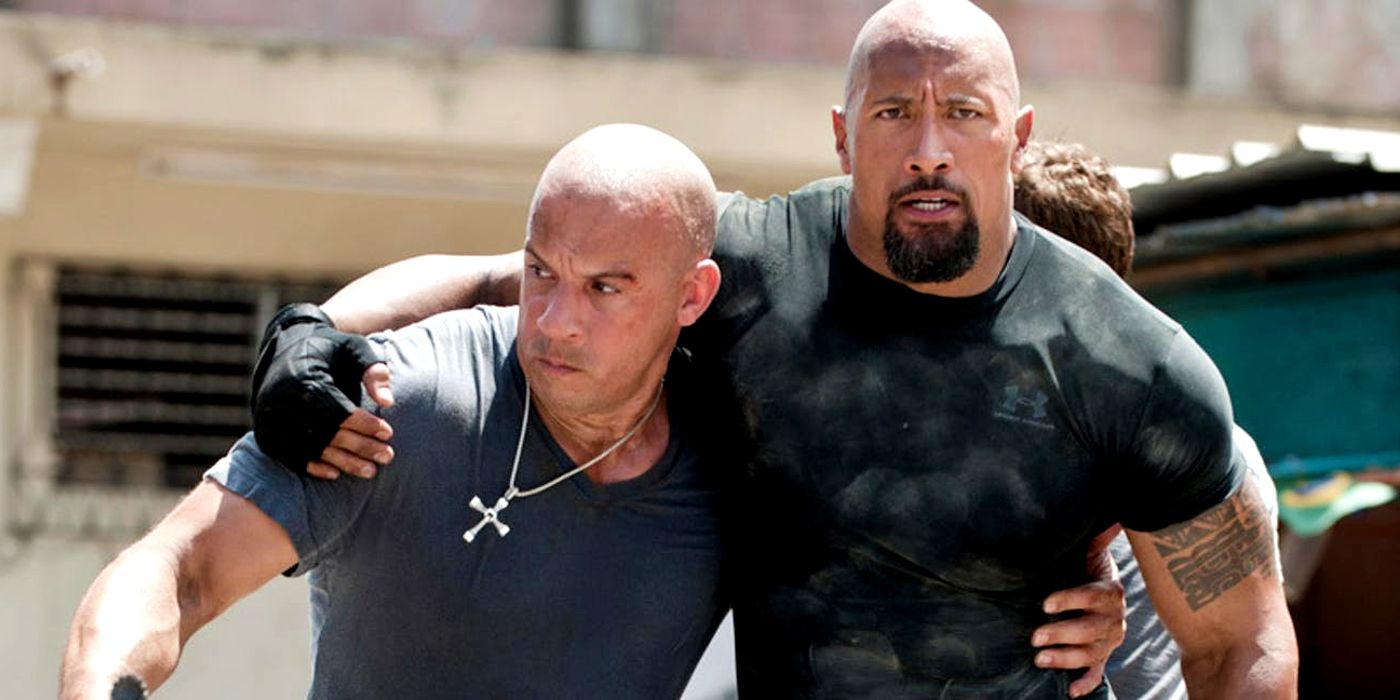 In an interview (via USA Today), Vin Diesel did his best to diminish the growing tensions. Diesel reassured Fast & Furious fans that he and Johnson still loved each other like family, claiming that things were blown out of proportion and Johnson was still “Uncle Dwayne” in his household. As a producer, Diesel claims he and Johnson didn’t always see eye to eye, and sometimes, their big personalities got in the way while working together. “It’s not always easy being an alpha. And it’s two alphas,” Diesel explained. At the end of the day, however, Diesel explained that he was always rooting for Johnson’s success. “Dwayne has only got one Vin in his life. Dwayne Johnson only has one big brother in this film world and that’s me.” 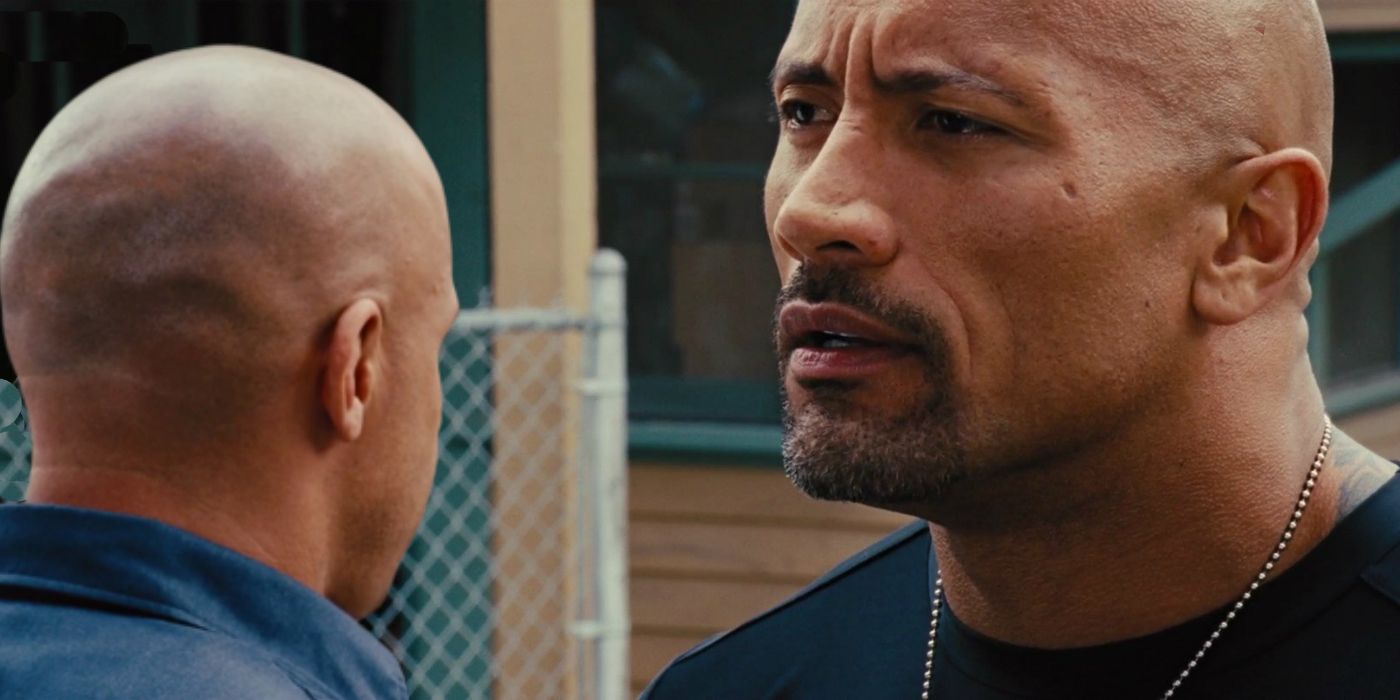 With the premiere of The Fate of the Furious, Diesel and Johnson put aside their differences to both be in attendance. Diesel continued his efforts to smooth out their tensions, reinforcing their status as a family. Johnson, however, took a less emotional approach when describing their feud, simply chalking it up to a case of “different philosophies.” 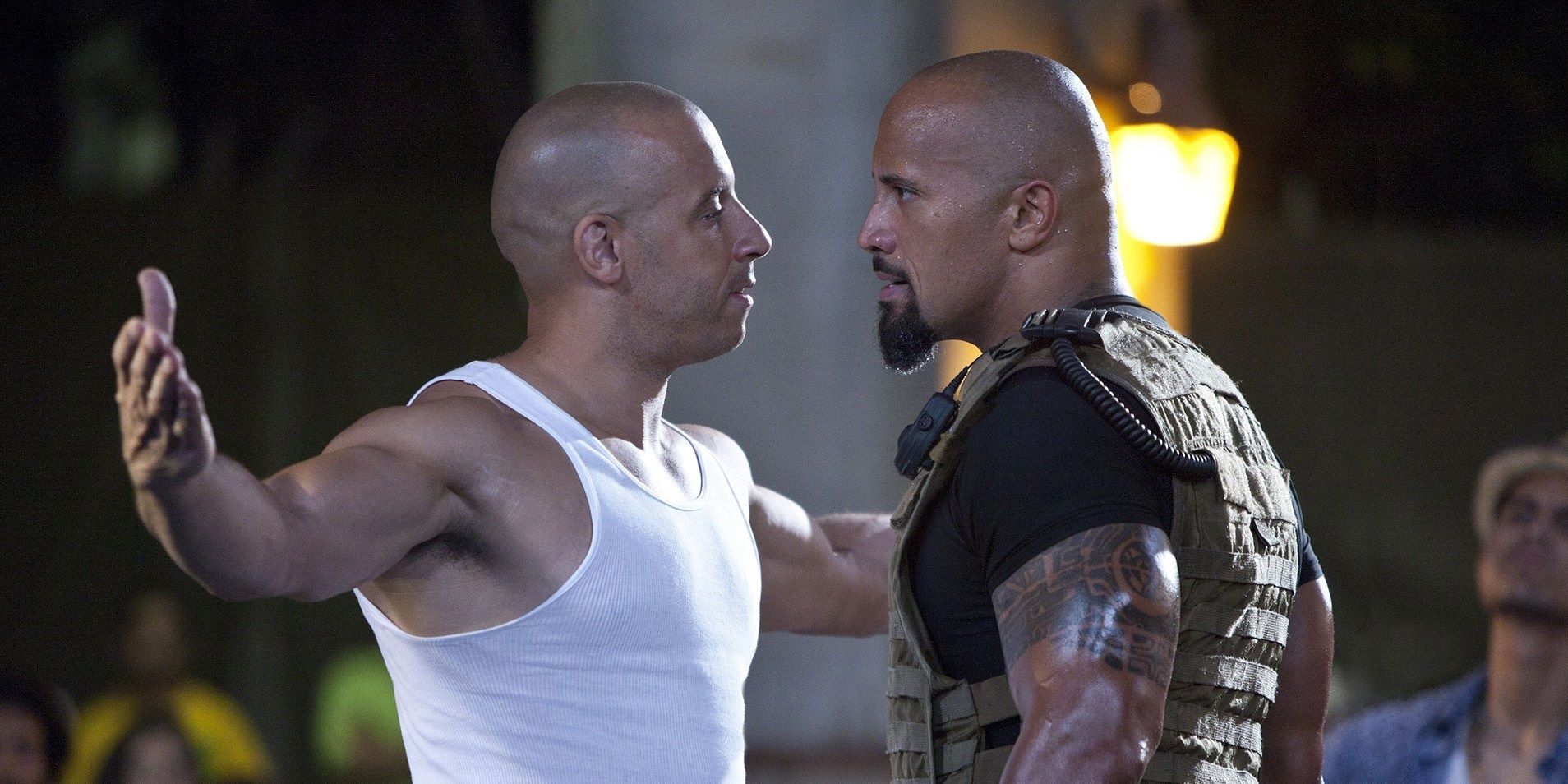 Like many movies in recent years, F9 faced multiple delays before its June 2021 release. However, when the first delay was announced back in 2017, fingers weren’t pointed at Covid-19, but instead, The Rock. When Fast & Furious star Tyrese Gibson took to Instagram to express his anger at the film’s delay, he placed the blame on Johnson, accusing the star of making the franchise all about him. F9 was originally delayed due to the release of the Hobbs & Shaw spin-off, which Johnson starred in. Diesel was quick to come to his “brother’s” defense, saying the blame shouldn’t be placed on any one person but that the franchise as a whole required maintenance. 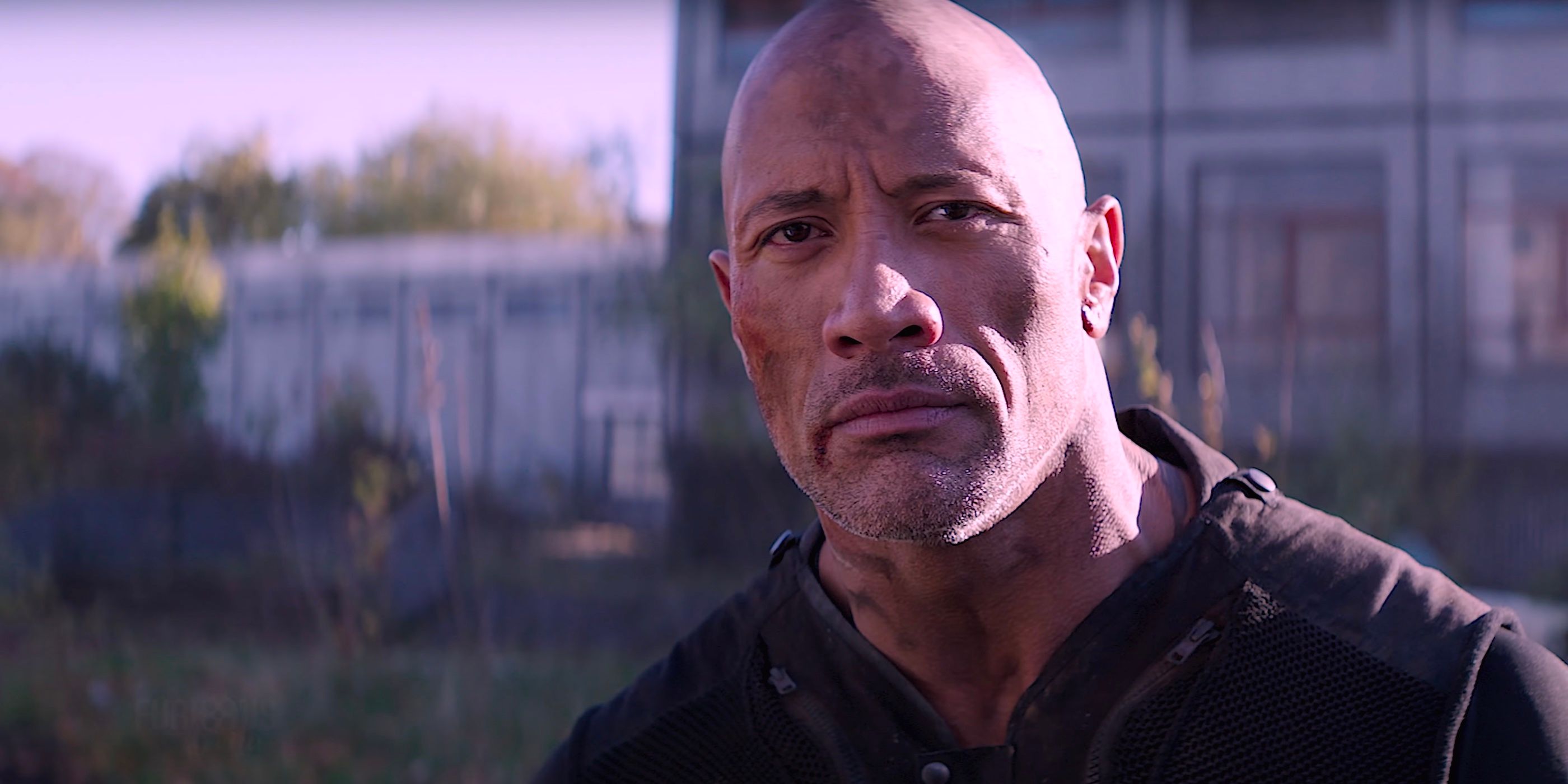 With The Fate of the Furious finally releasing, one thing became clear quickly — Johnson and Diesel didn’t film a single scene together throughout the entire film. Johnson confirmed this fact in a cover story (via Rolling Stone), where he touched on his feud with Vin Diesel. Ultimately, Johnson attributed their tensions to a difference in professionalism and moviemaking. The two had a serious conversation about the matter in Johnson’s trailer and finally came to an understanding of their differences — and the best conclusion seemed to be to just not work together. Johnson did say he wished Diesel “no ill will,” before he laughed and rescinded the comment, leaving his statement at the fact that he was grateful for the clarity between him and Diesel. 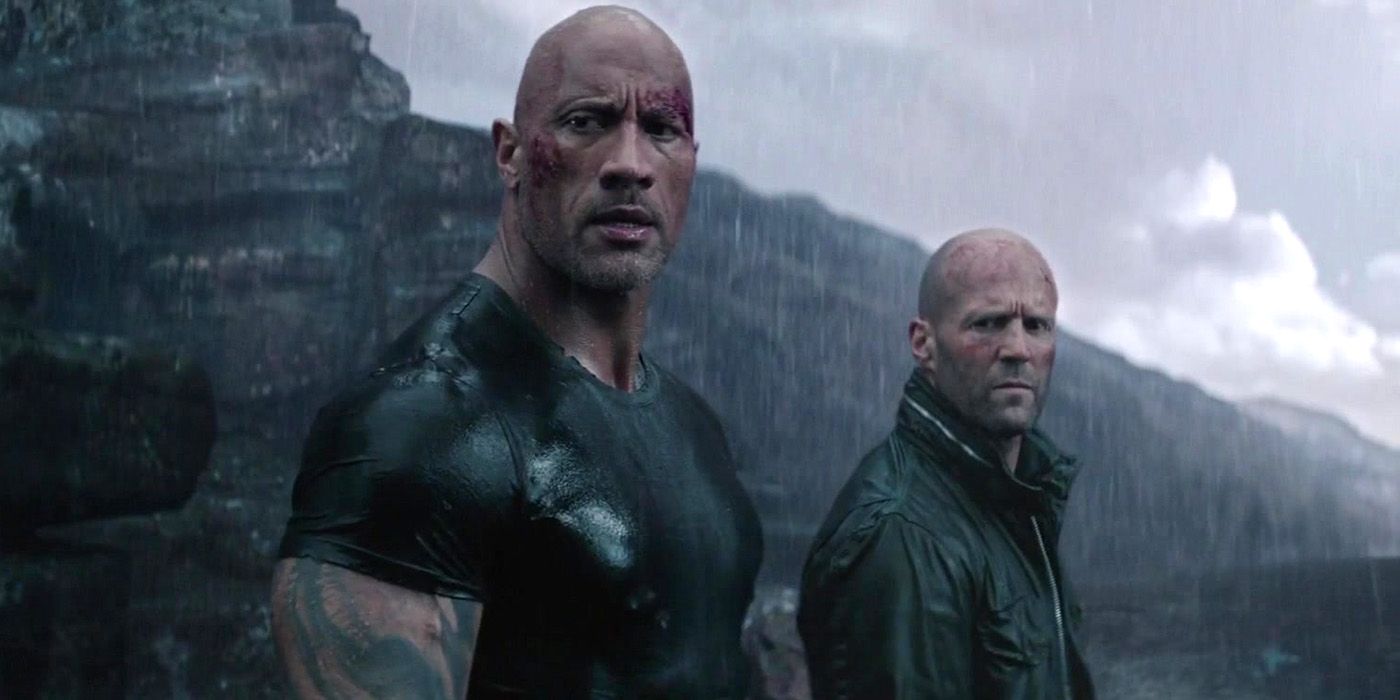 Over a year after The Fate of the Furious’ release, it seemed the relationship between Johnson and Diesel was improving. The Fast & Furious spin-off Hobbs & Shaw had finally released in August 2019 — and, while celebrating the movie’s success in an IGTV video, Johnson expressed his gratitude for Diesel’s support in the film. “Lastly, but not least, want to thank brother Vin for your support of Hobbs & Shaw,” he said. The sentence is ultimately minor — and might have been influenced by Universal — but after years of what seems like a petty feud, Johnson referring to his brother once more is a major step forward. Until this point, Diesel was the one pushing the idea that the pair was a family; however, Johnson seemed to be warming up to the idea once again.

June 2021 — Diesel Opens Up About His Differences With Johnson 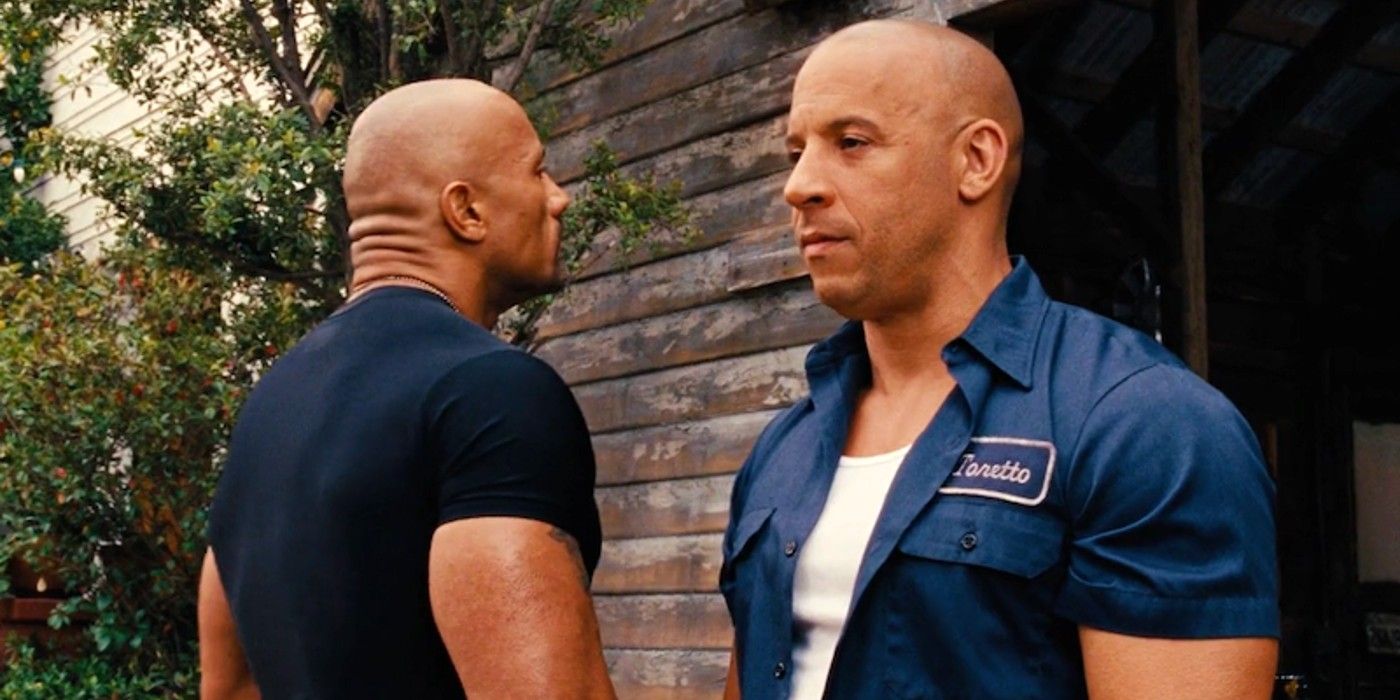 In an interview (via Men’s Health), Diesel finally shed some light on where his and Johnson’s professional differences could have come from. When Johnson joined the Fast & Furious family in 2011, he was fresh off of his career as a wrestler, and Diesel believes it took extra “tough love” to get a solid performance out of Johnson. Tough love between two alpha-male personalities could certainly lead to some stepped on toes, even if done out of love — and after three movies’ worth of tough love, it could be the reason Dwayne Johnson and Vin Diesel didn’t film together for The Fate of the Furious and why Johnson didn’t return to his role as Hobbs for The Fast & The Furious 9. 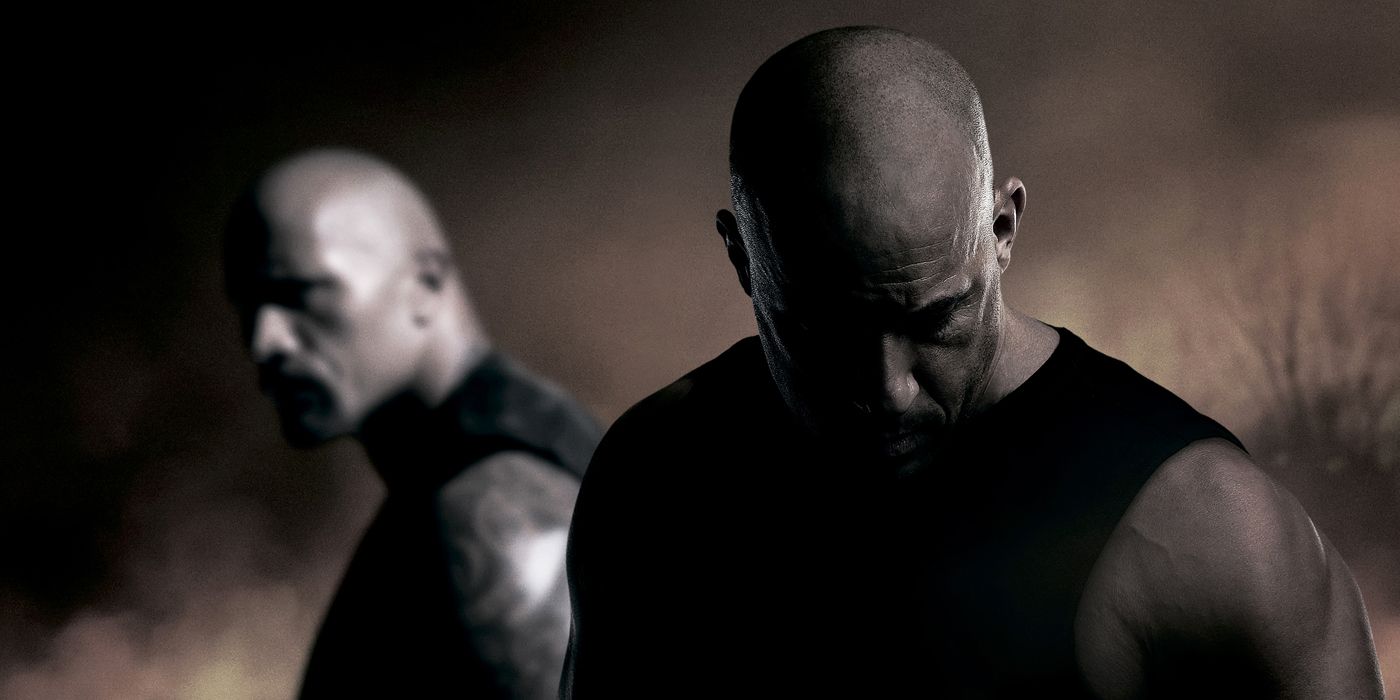 With the finale of the Furious franchise approaching, Vin Diesel took a risky move — he publicly pleaded for Johnson to reprise his role as Hobbs one last time in Fast 10. His letter, which he posted (via Instagram), began with Vin pleading to his “little brother Dwayne.” He attempted to appeal to Johnson with love from his own children and an obligation to the late Paul Walker and Furious’ destiny. His appeal, however, seemed to fall flat. In an interview with Vanity Fair, Johnson laughed out Diesel’s earlier comments about his “tough love,” saying that one part of him feels that “there’s no way I would dignify any of that bullsh*t with an answer.” Diesel’s claim that they’re brothers was not appreciated by Johnson, either: “I have one big brother, and it’s my half brother. And that’s it.” Despite Diesel’s attempt to bring Johnson back to the Furious franchise, the star seems dedicated to his decision not to reprise his role as Hobbs in the main Fast & Furious franchise any time soon.

More: Every Movie Releasing In 2023

Emily Clute is a features writer based out of New York. When a lifetime of fandom met a journalism degree, a ScreenRant writer was born. Emily is an avid fan of Marvel, anime, and horror (especially Stephen King), and is always willing to discuss Star Wars and Lord of the Rings. She is also a cosplayer who has attended conventions of all kinds for almost ten years. She can be found on Twitter @ejclute.