Homer’s had hundreds of jobs over the last thirty years, and we’re looking at a few that could have been great for The Simpsons, and some not so good.

You Are Reading :The Simpsons Homers 5 Best (& 5 Worst) Career Changes 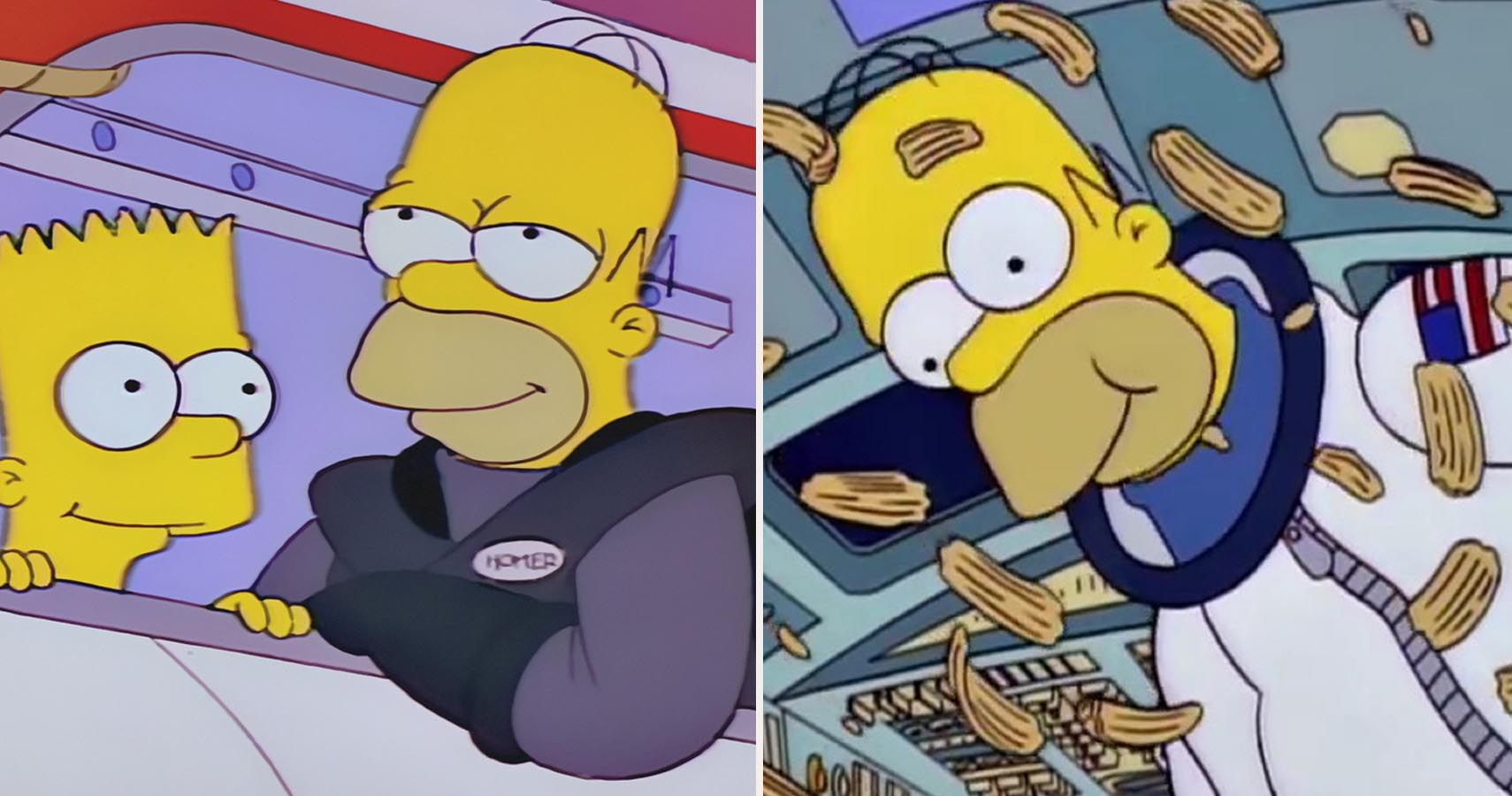 The Simpsons has been around for decades and is the longest-running primetime scripted television show in history, and they have tackled almost every story idea out there, which inspired South Park’s hilarious “The Simpsons Already Did It” episode.

One recurring story theme we’ve seen over the last thirty years has been Homer’s recurring career changes. While he always finds himself back in the position of Safety Inspector at the Springfield Nuclear Power Plant, he has had hundreds of other jobs during his time there. Today we are going to take a look at a few of his best career changes that might have done really well for Homer and the Simpsons, and a few that were terrible choices. 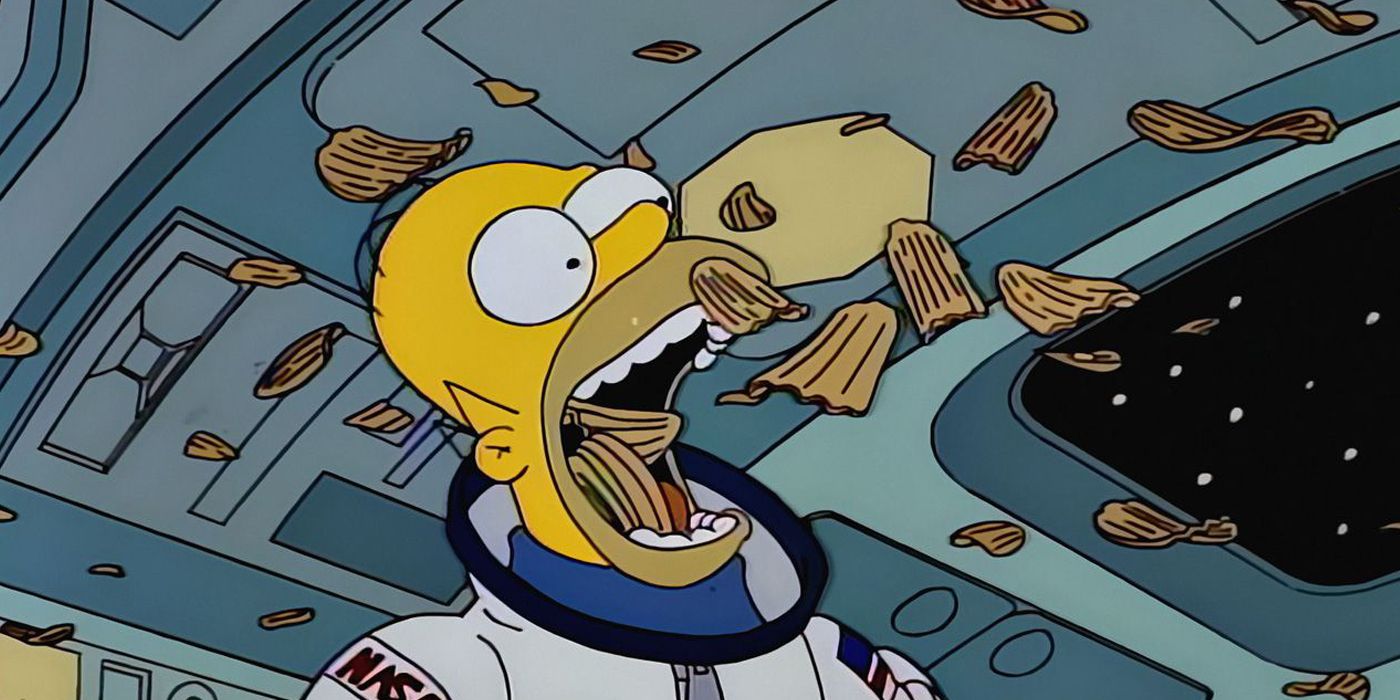 One of Homer’s most prestigious jobs and one nobody seems to believe he actually held was that of an astronaut for NASA. In the fifth season episode “Deep Space Homer,” NASA attempts a new strategy to boost interest in the space program by sending up an average American citizen on the next space mission.

Homer and Barney are selected as candidates for the program and go through extensive training at Cape Canaveral, with Homer succeeding due to Barney’s alcoholic relapse. Homer’s time in space was short-lived and catastrophic, but his family has maybe never been prouder. 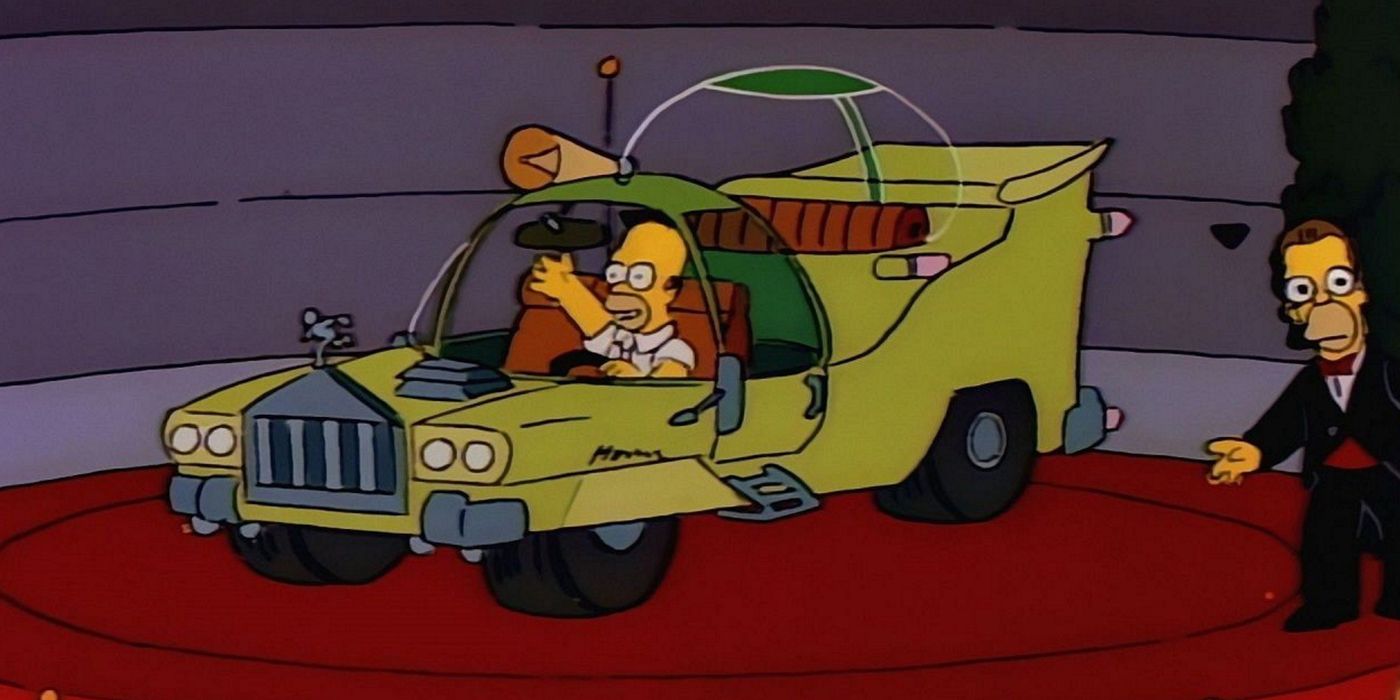 Season two’s “Oh Brother, Where Art Thou?” introduced Homer’s long-lost brother Herb Powell, voiced by Danny DeVito. “Uncle Herb” was the rich and successful head of Powell Motors who was overjoyed at the thought of having a family.

So overjoyed, in fact, that he offered Homer the chance to design a new car for his company, aiming to tap into the average working American’s automotive desires. He picked the wrong average American, and Homer’s “The Homer” was a trainwreck of a vehicle that caused the fall of Powell Motors and led to Herb losing everything. 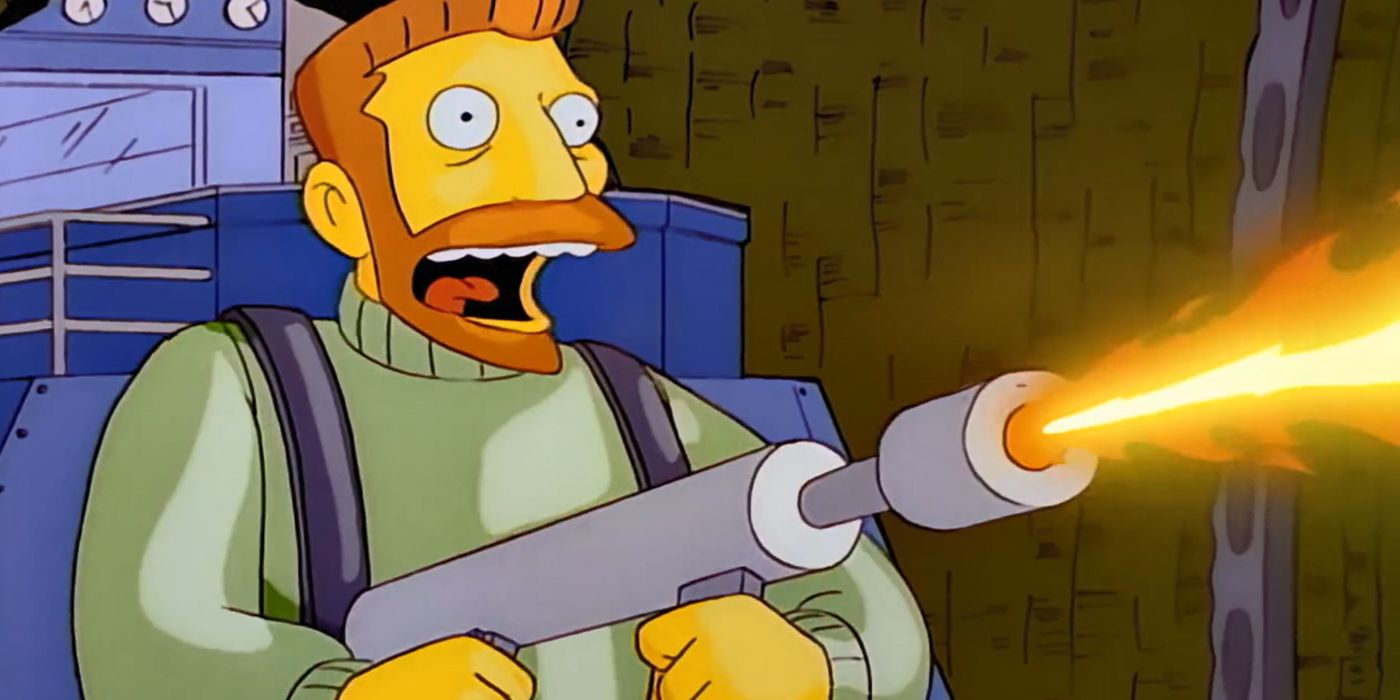 Homer’s career changes very rarely work out for the Simpson family, but when he was offered a position at the Globex Corporation by Hank Scorpio, the Simpsons were living in the lap of luxury. Homer was successful at his job as a team motivator, had a good relationship with his boss Scorpio, had a high-tech beautiful house, and access the finest schools and the beautiful nature of Cypress Creek.

Unfortunately, Globex turned out to be a front for Scorpio’s massive criminal organization, and the luxuries of their life at Cypress Creek soon turned sour and Homer was forced to quit. However, Homer has rarely been as successful in any of his career changes as he was at Globex, who rewarded his work by buying him the Dallas Cowboys. 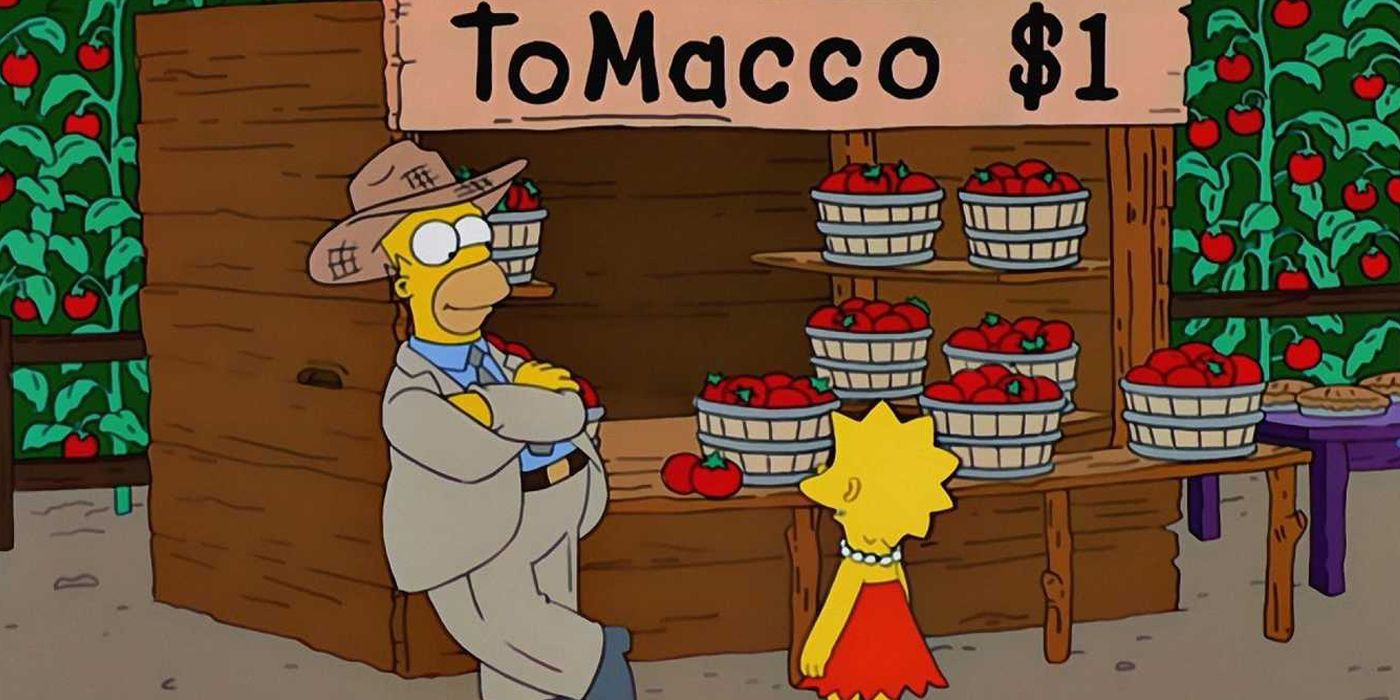 The eleventh season episode “E-I-E-I-D’oh” saw the Simpsons leave Springfield after Homer started slapping people with a glove after seeing The Poke of Zorro. After slapping a southern gentleman, Homer is challenged to a duel, which he accepts; consequently, the Simpsons hightail it to the farm that Homer grew up on to avoid the duel at dawn.

There he accidentally combines tomato and tobacco seeds in his crop, which he fertilizes with plutonium from the Nuclear Power Plant. The resulting Tomocca crop creates an addictive vegetable that is craved by Laramie cigarettes, though Homer screws up the negotiation. The crop itself was destroyed by Tomacco-addicted farm animals who also took out the Laramie helicopter carrying the final Tomacco plant. 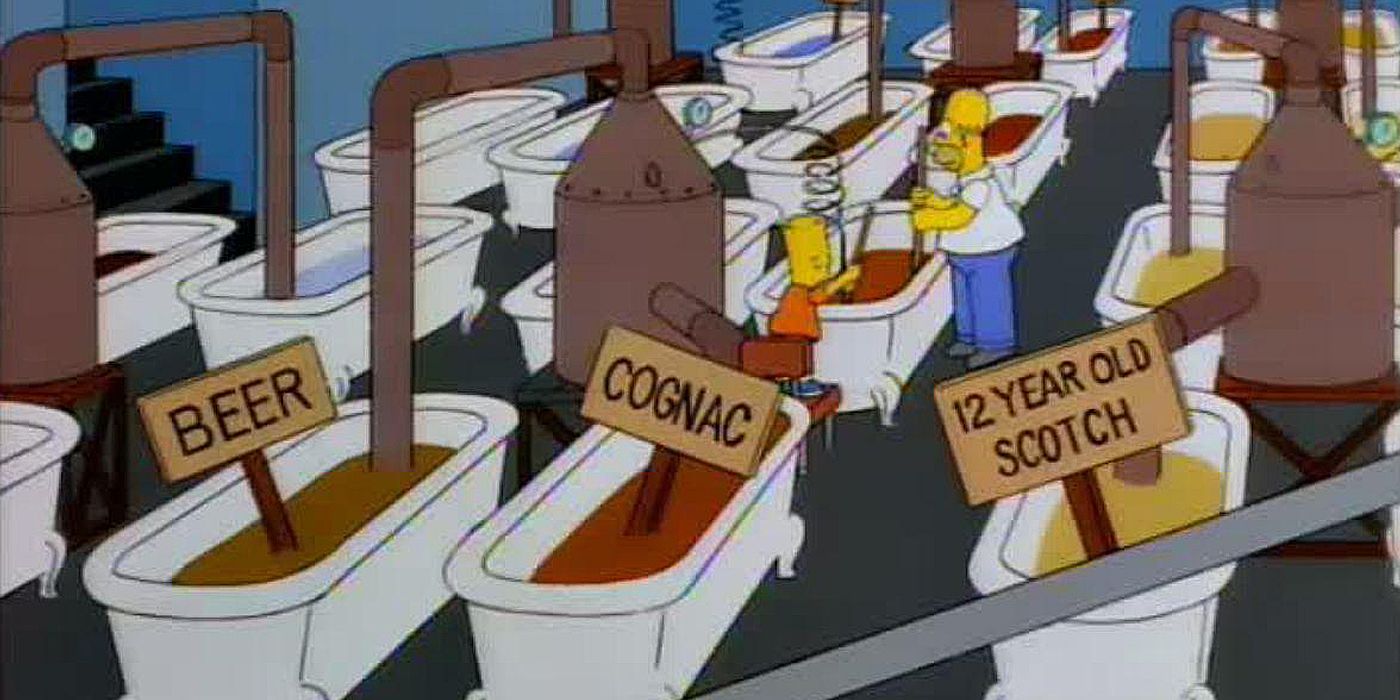 In the eighth season’s “Homer vs the Eighteenth Amendment,” Springfield returns to Prohibition-era laws after Bart gets drunk at a St. Patrick Day parade. Homer takes it upon himself to keep booze flowing into Moe’s by becoming a bootlegger and rigging an impressive way to deliver the alcohol through the use of bowling for a time, though when he tried to make his own alcohol his homemade stills kept blowing up.

While his wife Marge would usually groan in worried displeasure at a scheme like this, Homer’s ingenuity actually impressed her, and the family was making more money than they had from Homer’s job at the Nuclear Power Plant. He turned himself in as the mysterious “Beer Baron” to help get Chief Wiggum’s job back and end the Prohibition, resulting in a rare win for Homer. 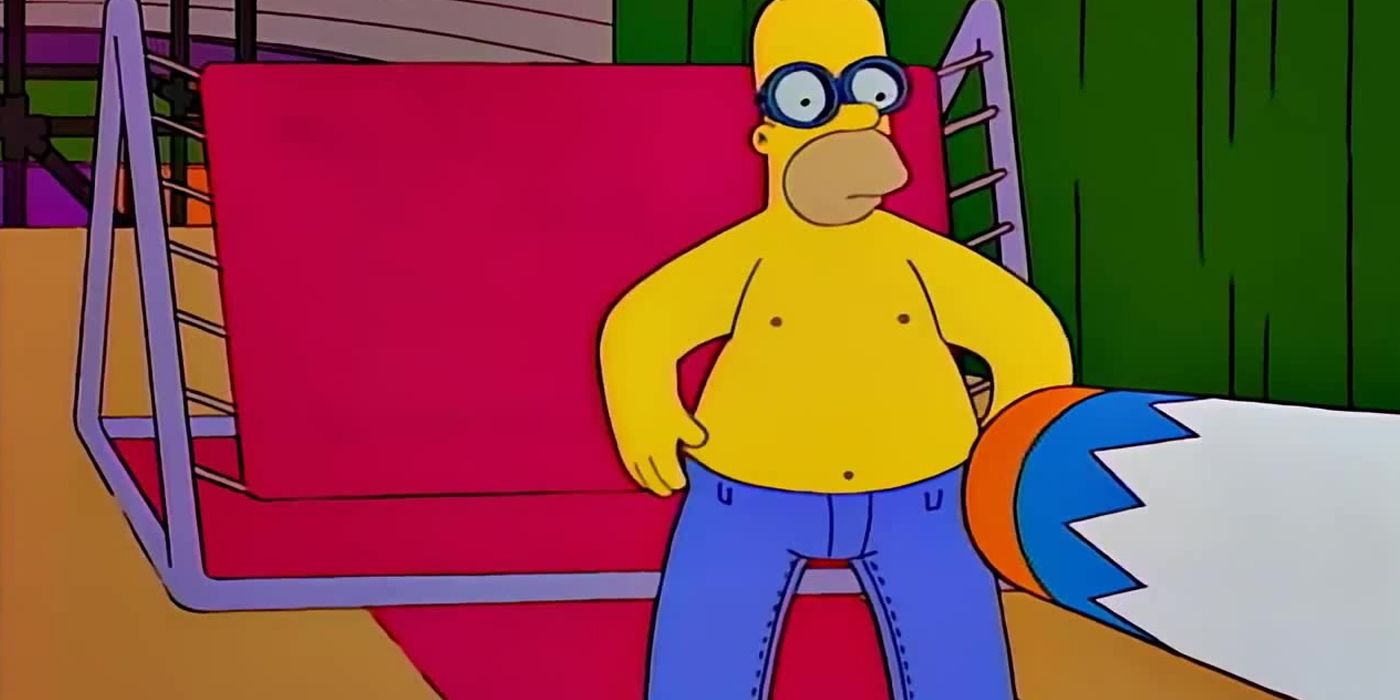 Homer joined the illustrious occupation of sideshow freaks in the seventh season episode “Homerpalooza,” when he visited the touring Hullabalooza music festival to prove he was still cool. Unfortunately, he proved he was very uncool, but he also discovered a hidden talent when he accidentally launched a pig out of a cannon into his belly with no damage.

He was soon brought on by the music festival as a cannonball catcher, which was inspired by the real-world cannonball catcher Frank “Cannonball” Richards. While he was finally cool as a member of the tour and got to share the stage with popular ’90s bands like Smashing Pumpkins and Sonic Youth, the cannonballs were severely injuring him and he was forced to quit the festival. 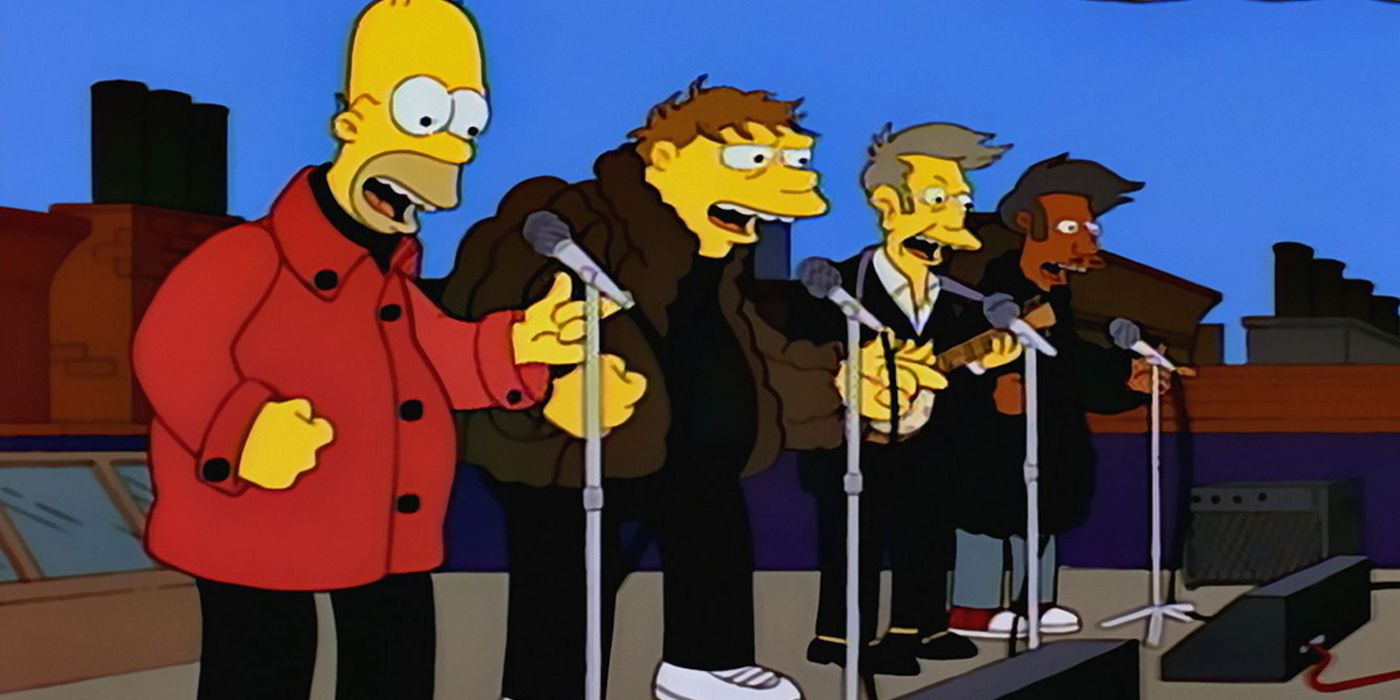 Homer has had quite a few moments of success within the music industry that really make us feel like he missed his calling. Not only was he a part of The Be Sharps with Apu, Barney, and Skinner in “Homer’s Barbershop Quartet,” but he also wrote the hit song “Everybody Hates Ned Flanders” in “Dude, Where’s My Ranch?,” that went on to be nominated for an Emmy (in the real world).

Homer was also the semi-successful manager of Lurleen Lumpkin and helped launch her country music career, and he was the frontman of the grunge band Sadgasm in “That 90s Show.” Regardless of how Homer finds himself in the music industry, he kills it. 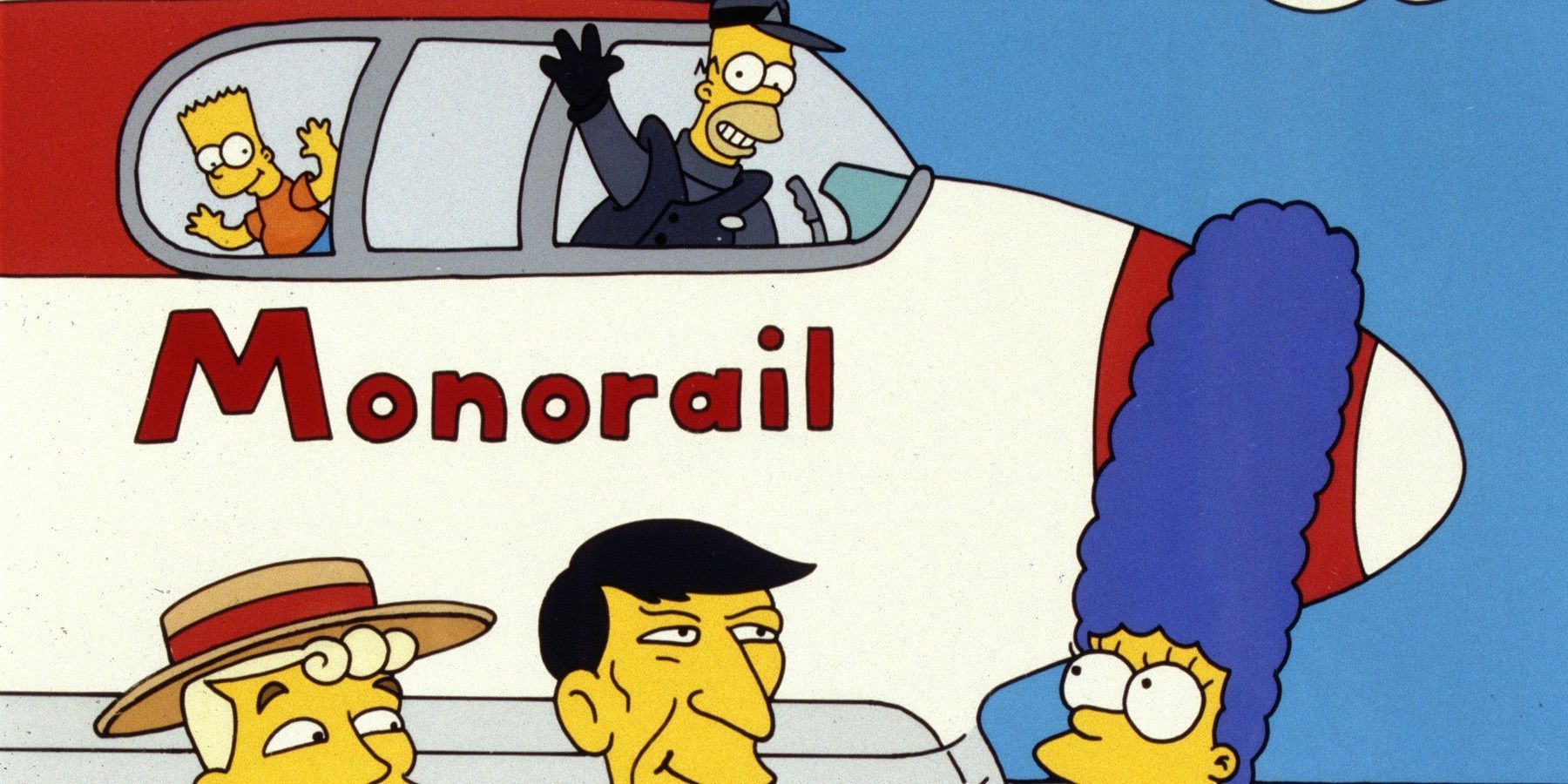 In “Marge vs. the Monorail,” Lyle Lanley (voiced by the late Phil Hartman) rolled into Springfield during a town meeting to pitch his Monorail scheme idea with a catchy song. When Homer was chosen randomly as the monorail conductor, increasing red flags still didn’t faze much of Springfield, though a suspicious Marge soon uncovered disasters at Lanley’s former monorail sites.

Homer’s position as the monorail conductor was doomed to failure from the get-go, only this time it wasn’t because of Homer’s own usual ignorance and/or stupidity. In fact, Homer saved everyone on the monorail and did what other dimwitted drivers in Brockway, Ogdenville, and North Haverbrook could not. 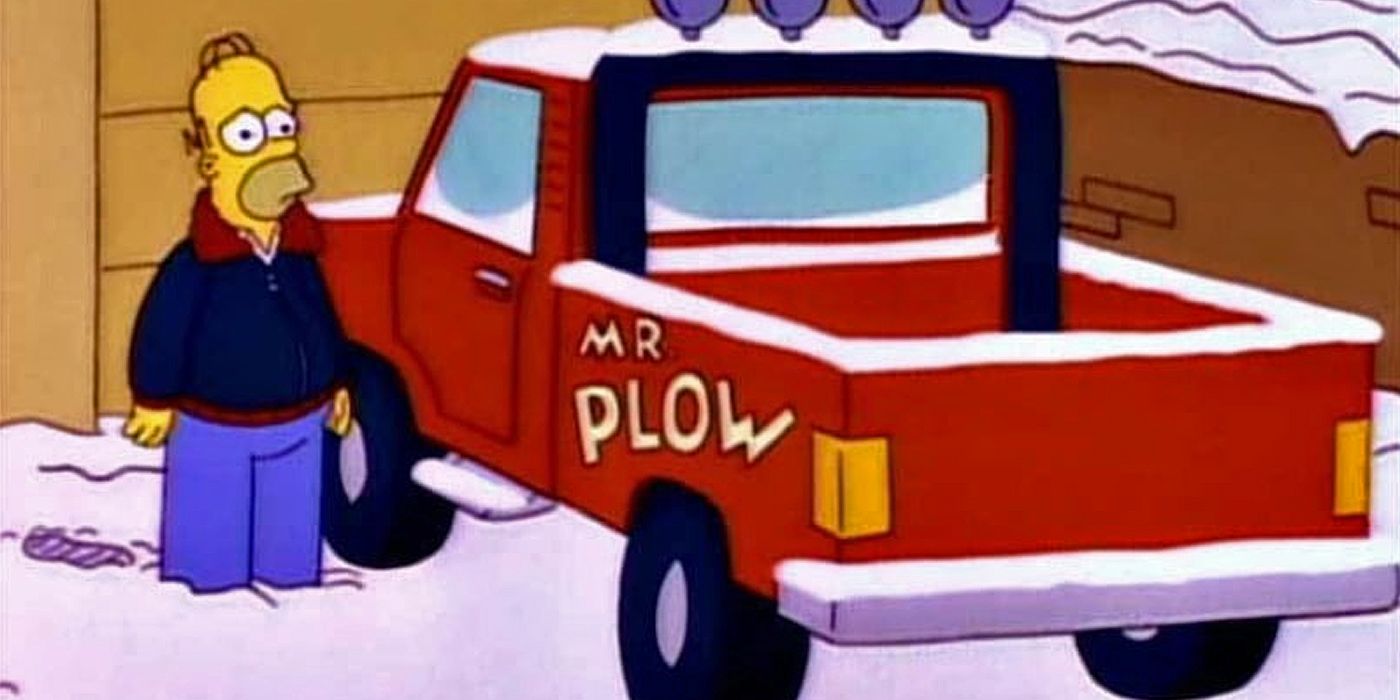 Homer has started a few of his own business over the years, from his SpringShield security company to the internet-based Compu-Global-Hyper-Mega-Net, but not many have actually done well financially. Season four’s “Mr. Plow” saw one of Homer’s rash decisions turn briefly profitable after an amazing late-night/early morning commercial starring the Simpsons family.

After recklessly buying an expensive snowplow, Homer becomes Mr. Plow and begins to rake in the dough by plowing snow. At least, until Barney buys a bigger and better plow, though they eventually agree to work together. Unfortunately, when Homer included the phrase “…not even God Himself can stop them” in his heartwarming finale speech, God Himself stopped them with a heatwave and the truck was repossessed. 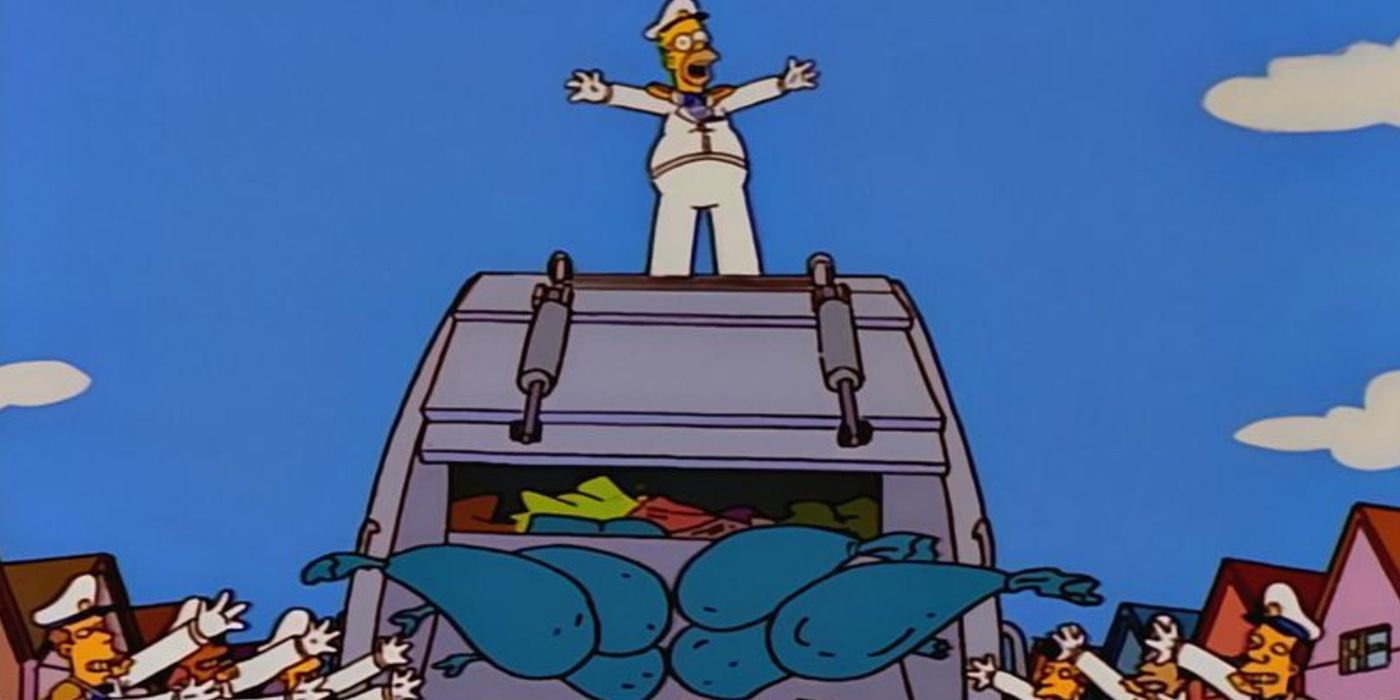 Homer’s campaign promises and sheer drive as the new Sanitation Commissioner highlight the best of Homer’s jobs. The worst came from his unfulfilled promises, rapidly blown budget, and immoral waste handling practices that resulted in nothing short of an ecological disaster. The entire town of Springfield was moved five miles down the road to escape Homer’s trash problem.