TMNT The Last Ronin Was Almost Killed By A Frog

TMNT: The Last Ronin Was Almost Killed By A Frog

In TMNT, Michelangelo almost dies by the hands of a mutant frog during a counseling session at Mutant Town, which is ironic since he’s the Last Ronin.

You Are Reading :TMNT The Last Ronin Was Almost Killed By A Frog

It’s ironic that the last surviving turtle of the Splinter Clan, whose survival can most likely be attributed to some truly bodacious ninja skills, was almost killed at the hands of a recently mutated frog with no experience – during a mutant support group session of all places. Before becoming the eponymous Last Ronin, Michelangelo and his three brothers were all still very much alive and considered a force to be reckoned with of unmatched potential. But as of issue #101 of IDW Publishing’s separate series, Teenage Mutant Ninja Turtles, all four fighters, along with a slew of newly created mutants, have been quarantined in a section of Manhattan’s East Side now referred to as Mutant Town as a result of a mutagen bomb that an extremist mutant named Old Hob detonated there, transforming its human inhabitants into mutants.

Tensions have been understandably quite high in Mutant Town for a myriad of reasons, as it is guarded by a governmental organization originally tasked with destroying all mutants. No mutants are allowed to leave and the mayor has yet to provide any aid or even attempt to reunite victims with their families as he originally promised. But most especially, most of the mutants there had once been humans not too long ago and are understandably suffering from the shock of their recent transformation, more so if they have been subjected to the additional trauma of family members rejecting them for their new appearances. The most noteworthy of these rejections being Mona Lisa, whose parents hung up on her upon seeing her new form as a mutant salamander during a video chat session.

To help these victims come to grips with their new reality, a mutant support group was soon formed in Mutant Town where participants discuss their fears, grievances, and woes to experience some form of catharses. But one session goes horribly, horribly wrong (without the help of any well-known villains). In the latest issue, Mona enters the counseling circle not too long after being rejected by her parents and begins venting. A poisonous frog mutant named Jay later agrees with her, sharing his own negative experiences before expressing frustration at Old Hob who had forced this change on him, later referring to it as an act of violence. Tensions between the participants begin to flare when a rhino mutant says he supports Old Hob since, as a human, he had succumbed to heavy drinking and only recovered after he mutated and therefore believes he helped cure him. 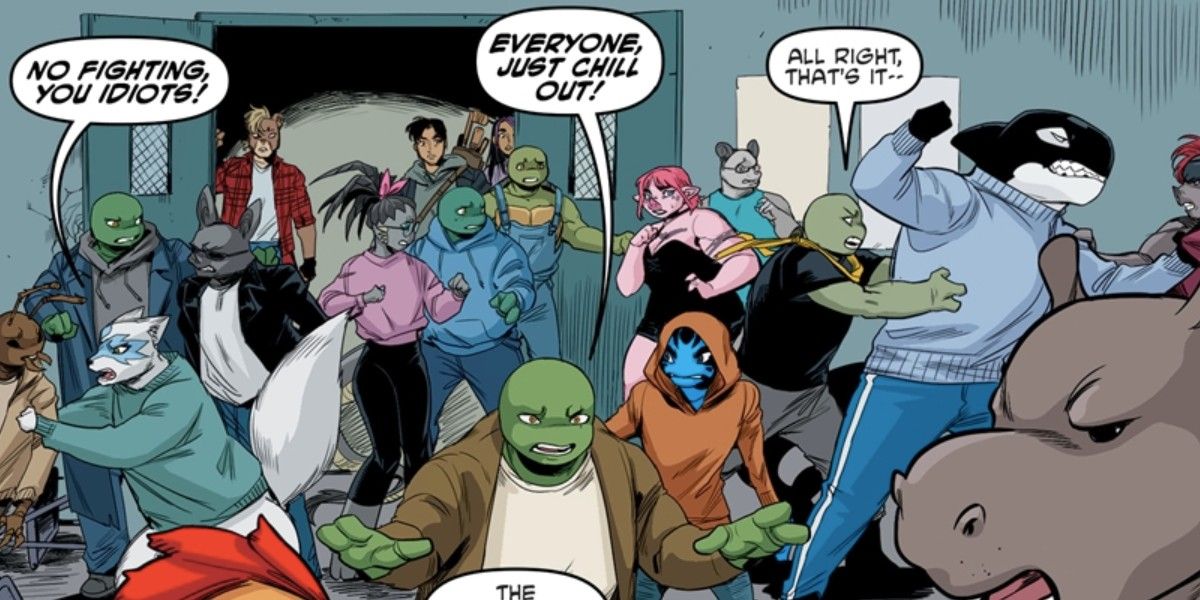 Jay and Mona’s disbelief and anger at the mutant soon cause a domino effect that leads to other participants either supporting or opposing them, and, in turn, others getting triggered at these responses. All of this culminates in an all-out brawl when members of Old Hob’s Mutanimals reveal themselves. Jay, who is especially angry at the Splinter Clan for failing to act in their best interests and for enforcing the law in Mutant Town when they themselves weren’t even mutated by the mutagen bomb nor human, to begin with, soon confronts Michelangelo during the ensuing chaos. His anger at the turtle’s lack of action intensifies when he discovers Mike is the host of a podcast that promotes safety and morality, for his show apparently embodies all that is wrong with the Splinter Clan’s response to their current predicament. In frustration, Jay reaches out and touches Michelangelo. But as a poisonous frog, this simple act of touching poisons him.

In the end, things don’t look good for Michelangelo. The poison nearly kills the iconic turtle, but ultimately he survives the encounter. The issue – along with the current Last Ronin series, shows Michelangelo is built to survive even in the face of extreme danger. It’s too bad his fellow Teenage Mutant Ninja Turtles couldn’t survive the bleak future as well.