Who created the Transformers? Was it the female character seen in the trailers for Transformers: The Last Knight? And just who is she, exactly?

You Are Reading :Transformers The Last Knights Cybertronian Creators Explained 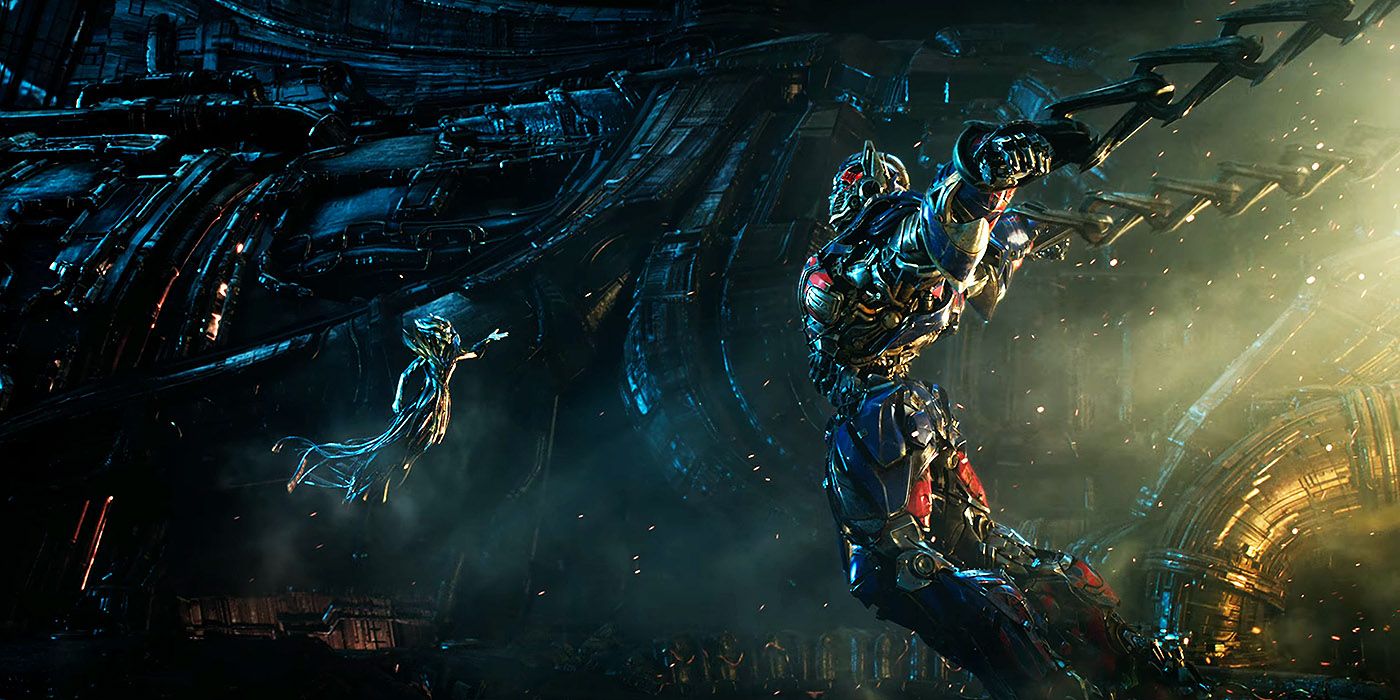 From the trailers released for Transformers: The Last Knight, it’s clear that it’s a story that takes Optimus Prime on a dark journey. After the events of Age of Extinction, Optimus left Earth in search of “the Creators,” a mysterious race responsible for creating the Transformers. As in, all of them — Autobots and Deceptions alike.

The live-action take on these Creators in Michael Bay’s film is guaranteed to be different than the mythologies established in cartoons and comics, yet it’s also likely that the movie’s version will take inspiration from those sources.

In the original TV cartoon series, the Transformers were created by the “Quintessons,” an anything-but-attractive looking race of cold, merciless cybernetic beings with five faces. First introduced in the animated Transformers: The Movie and clearly dreamed up in somebody’s nightmarish fever dream, these egg-shaped, multi-tentacled creatures float on a beam of energy and pass judgment on any beings who have the misfortune of finding their way to the Quintesson home world. 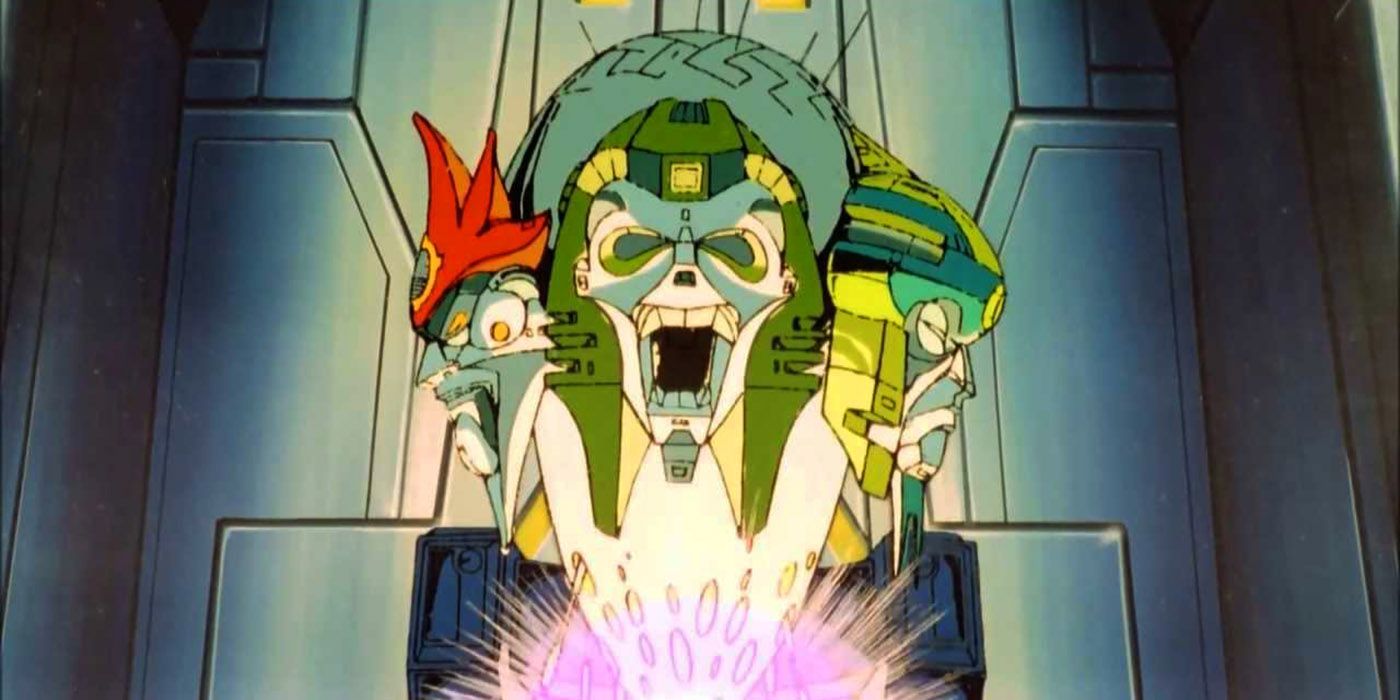 The story goes that millions of years ago, the Quintessons lived on and ruled Cybertron, building the Transformers as their servants. But the Transformers unexpectedly developed emotions and rebelled against their cruel masters, driving them off of Cybertron. Incidentally, the Autobots were originally created for general labor tasks while the Decepticons were designed for military applications.

In the Last Knight trailer, there’s a female character that speaks to a chained-up Optimus Prime who appears to be the Bayverse version of Quintessons. According to IMDb — which admittedly has to be taken with a grain of salt — her name is “Quintessa,” and she’s voiced by actress Gemma Chan. (“Quintessa” also happens to be the name of the Quintessons’ home world in the cartoons.)

The film character Quintessa doesn’t bare a huge resemblance to her cartoon counterparts, with a much more humanoid shape. Although you can clearly see more than a dozen tentacles flowing below her torso in place of legs. 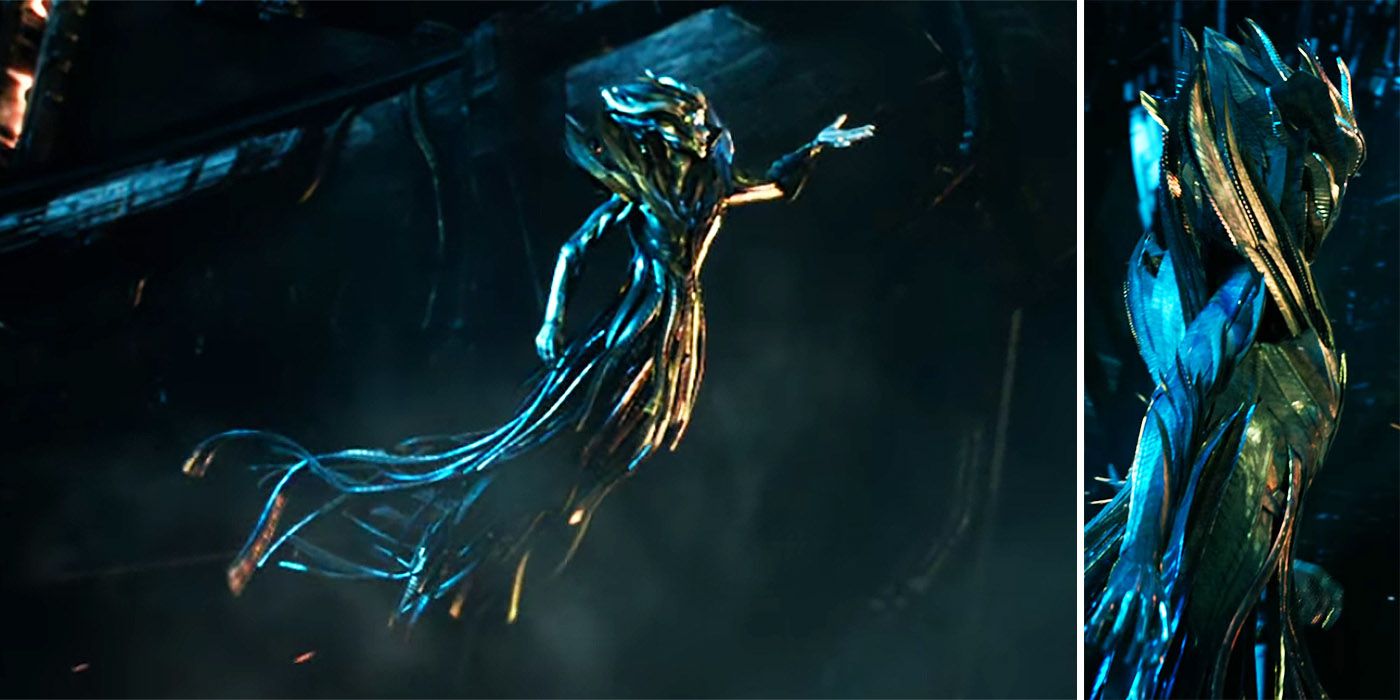 In Transformers: Age of Extinction, there was a brief shot in the opening sequence of what was assumed to be the hand of a Creator. The hand in question was organic, with technological components attached. Yet, based on appearances, Quintessa seems to have a shiny, metallic body. Does this mean that the hand from Extinction was not one of the Creators after all, but maybe a minion of the Creators? Or is Quintessa something different? Could she be wearing some kind of armor?

We won’t know until The Last Knight arrives in theaters.

The Quintessons are, in traditional Transformers mythology, heavily connected to the twin cosmic entities, Unicron and Primus. Unicron, as anyone who saw the 1986 animated movie knows, is a planet-devouring bringer of death and chaos. He’s also utterly massive in size, and on those occasions when he’s lost his body and been left as nothing but a gigantic head floating across space, he’s been known to attach said head to entire planets and use them as his new body. 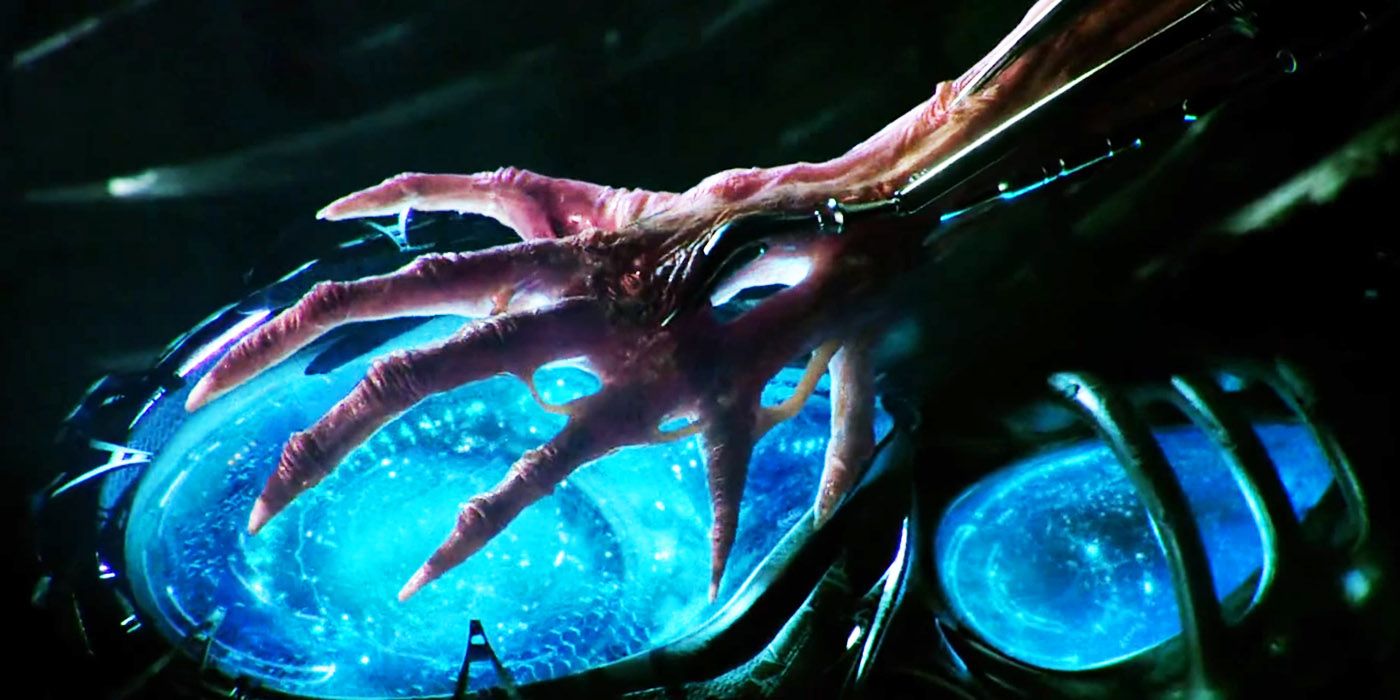 Primus, in most continuities, is his twin brother, the good yin to Unicron’s evil yang. Together, they keep the universe in balance. To fight Unicron’s unprecedented might, Primus created “the Thirteen,” a group of transforming robots that predated the Transformers and served as protectors of the light. It’s possible that these Thirteen, who are also known as the first Primes (yes, like Optimus) and are the inspiration for the robot knights seen in Arthurian times in the previews for Transformers: The Last Knight.

In some Transformers iterations, the Quintessons are the creation of Unicron, serving as his enforcers. Despite the multiple realities and interpretations, the one fact about the Quintessons/Creators that never changes is that they are vicious enemies of the Transformers – particularly the Autobots. They sometimes ally themselves with the Deceptions, but those two factions always end up double-crossing each another in the end.

So what does this mean for the character Quintessa as seen in the trailer for Transformers: The Last Knight? It’s known that Optimus Prime seeks her out, and not the other way around. But obviously, it doesn’t go so well because first, she chains him up for their little powwow, and second, by all accounts, it’s her that’s responsible for turning him evil and setting him against his fellow Autobots. The trailer plainly shows his blue eyes turn purple as she alters him. 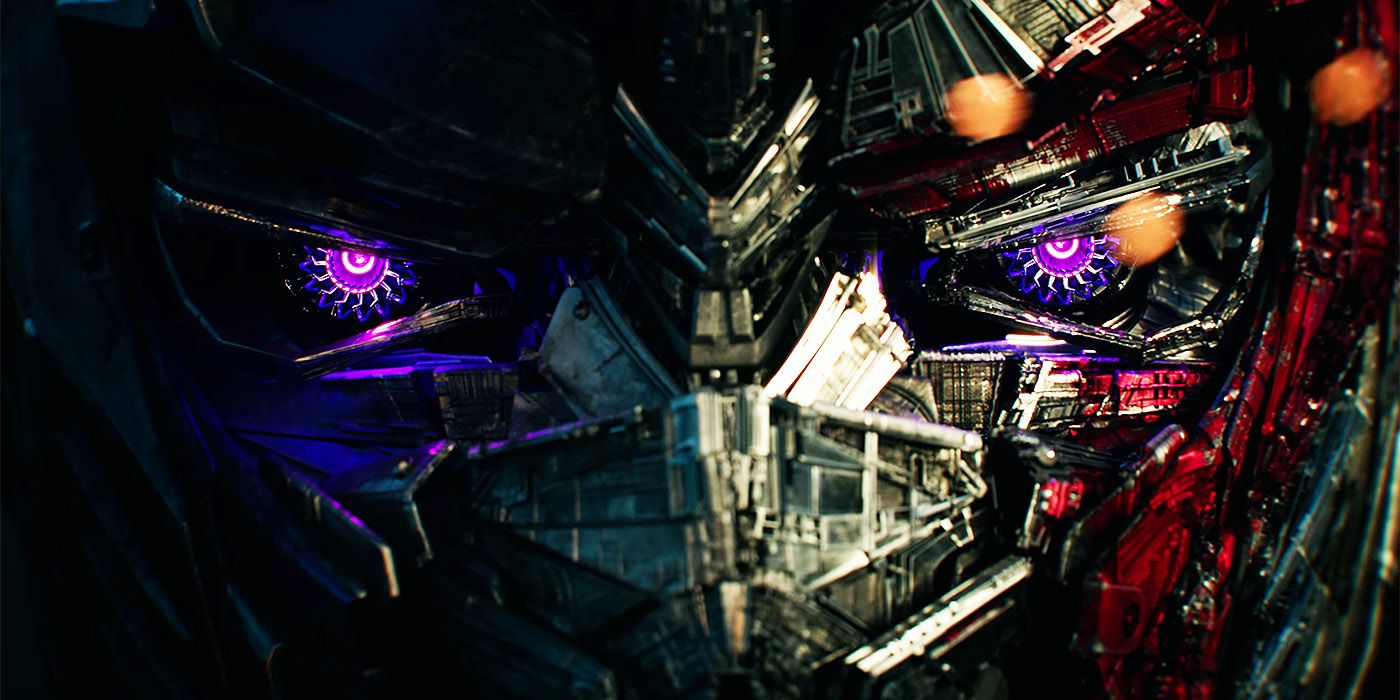 It’s also known that after this happens, Optimus becomes part of a plot to bring another world to Earth and alter it in the Transformers’ image. It’s likely this is the remains of Cybertron — especially since Optimus is heard saying “for my world to live, yours must die.” This theory also lines up with Optimus’ quest for redemption, as restoring his dead world would accomplish his absolution.

The problem, of course, is that this new-and-more-evil version of Optimus is seemingly okay with wiping out every human being on Earth if it brings his dead planet back to life, having destroyed it himself according to the trailer. It could be argued that Optimus has been on an increasingly dark path across the four preceding movies, given that mankind has continually turned more and more against him and his Autobots, always ungrateful for Optimus’ efforts to protect and defend mankind. The human race even went so far as to hunt and try to kill him and his people in Age of Extinction. So maybe when Quintessa offers him this shot at redemption, even if it involves tinkering with his moral compass… Maybe it’s not as big a leap for him to make as it might have once been.

Another possibility regarding that hexagonal-patterned framework of a planet that tries to swallow Earth is that it isn’t Cybertron at all. It’s been rumored that none other than Unicron might show up in The Last Knight, which would make this planetary framework system part of his attempt to turn Earth into his new body. The way the alien technology overlays atop Earth’s surface, you could kind of see it. 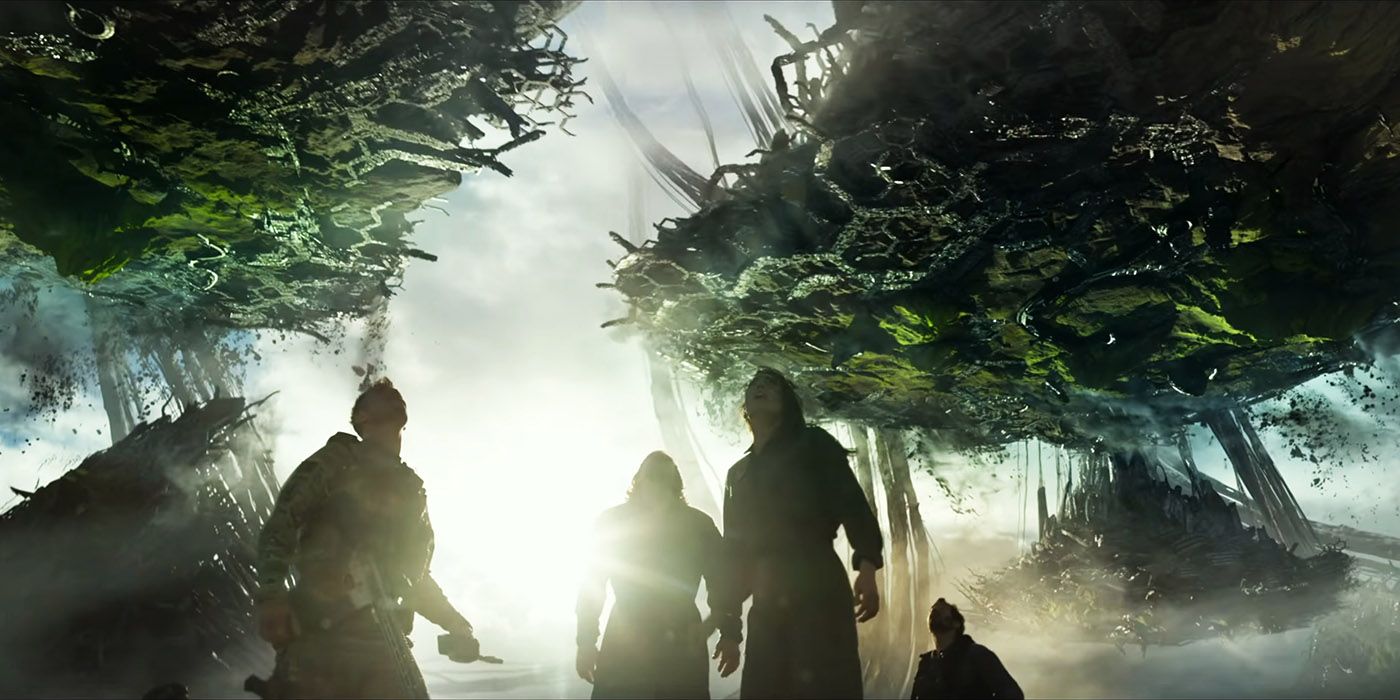 But the smart money is still on Cybertron, given the involvement of this Quintessa/Creator character, and Optimus’ desire to revive his home world. Here’s the thing. It’s known that Paramount has a writers’ room full of creatives who have been plotting out a deeper mythology for the film series, and they already have plans and ideas for what the next two movies will be about. If they’re planning things that far in advance, then it makes sense that they would want to save Unicron’s arrival for the culmination of their multi-part story.

It also makes sense that if Unicron is at the core of the writers’ room’s grand plan — and really, what else could possibly be? — then introducing the Quintessons (er, Quintessa) to the films is the logical first step in that direction.

Add all of this up, and here’s what you get. Despite the purple-eyed wickedness Optimus Prime displays in the trailer, it’s likely that Quintessa is The Last Knight’s true villain, manipulating Optimus and who-knows-who-else toward her own ends.