A new teaser image for Michael Keaton’s Batman has been released from The Flash movie, alluding to something dark being part of Bruce Wayne’s return. 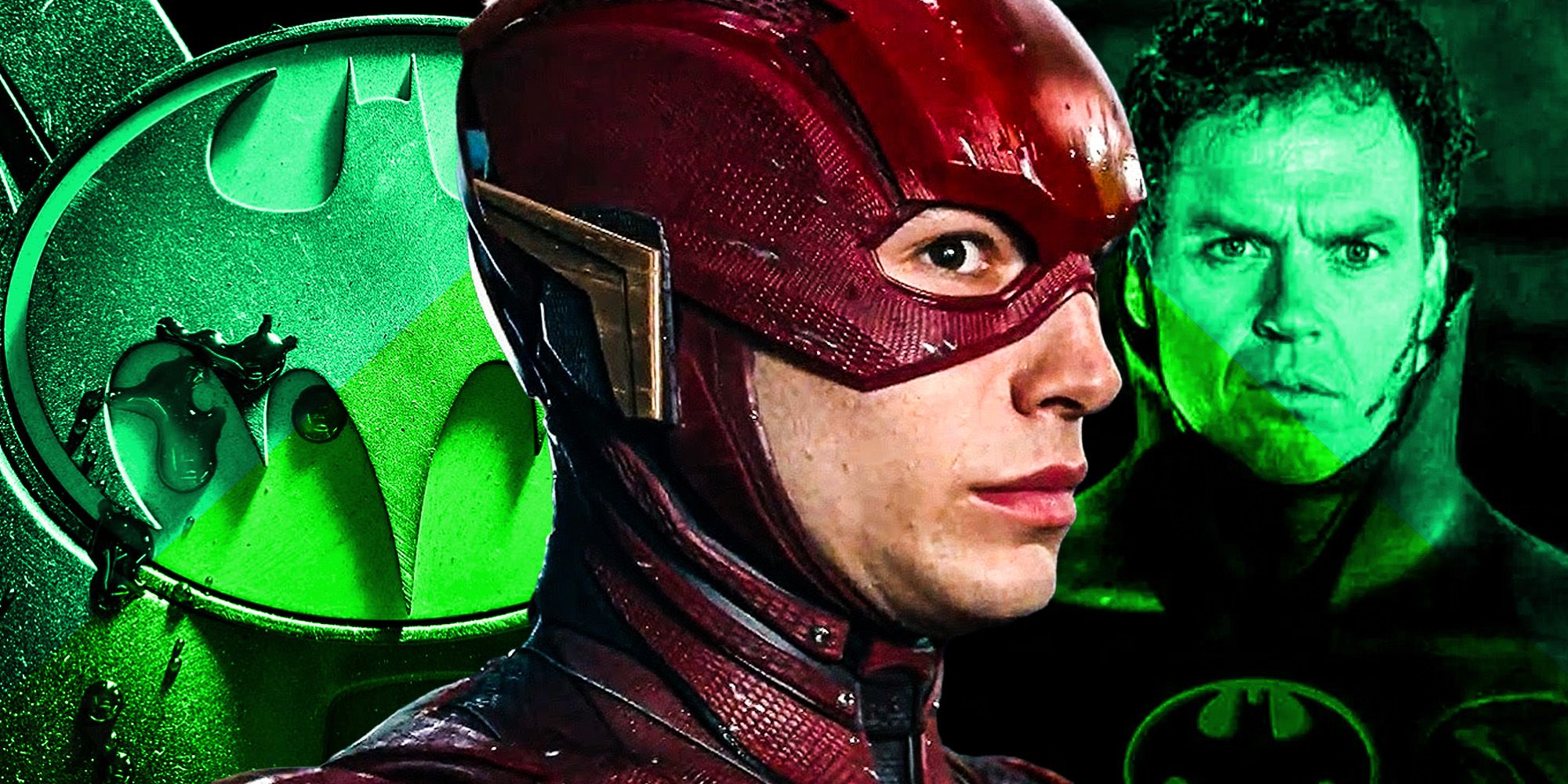 The Flash movie director Andy Muschietti is teasing a potentially darker version of Michael Keaton’s Batman as his Bruce Wayne enters the DCEU with a bloody Batsuit. With Warner Bros. going fully into the Multiverse with Barry Allen’s upcoming solo adventure, a lot is going down in Muscheitti’s DC film. Not only will Ben Affleck’s Batman be back for another round, but The Flash will also include a very familiar Dark Knight from another universe. After 20 years since playing the DC icon in Batman Returns, Keaton is reprising his Batman from Earth-89. Whether or not the Batmen of two worlds will get to share a scene together remains to be seen.

Filming is currently underway, with set photos revealing that Keaton’s Wayne Manor will be incorporated into The Flash. But Earth-89’s Bruce will also be suiting up once more as the Caped Crusader, which has been teased through concept art from DC FanDome 2020. At this point, fans shouldn’t be shocked if Keaton drives around in his Batmobile for the first time in two decades. While plot details are naturally being kept under wraps, Muschietti shared a very cryptic image of Keaton’s Batsuit, with the iconic logo front and center. But there are a couple of drops of blood on the emblem, which is causing a lot of theories on what The Flash movie is doing with Keaton’s Dark Knight.

While the photo is evocative of the DC property Watchmen, with the iconic smiley face pin covered in drops of blood, that is most likely not what Muschietti is trying to convey. At the very least, it might be an homage to that, but it is hard to picture the Watchmen having anything to do with The Flash movie. The image feels more like it is setting up the idea that Keaton’s Batman will be a lot darker compared to the last time fans saw him in 1992 in Tim Burton’s second Batman installment. Since it has been 20 years since Keaton’s Batman was seen, a lot of things have gone down, something the upcoming Batman ’89 comic may be focusing on when it comes out. Furthermore, the idea of an older superhero bleeding – therefore not healing entirely – is indicative of their current state, which moviegoers saw in Logan in 2017. The image also means Keaton may not remain on the sidelines throughout the film and may get in on the action himself. 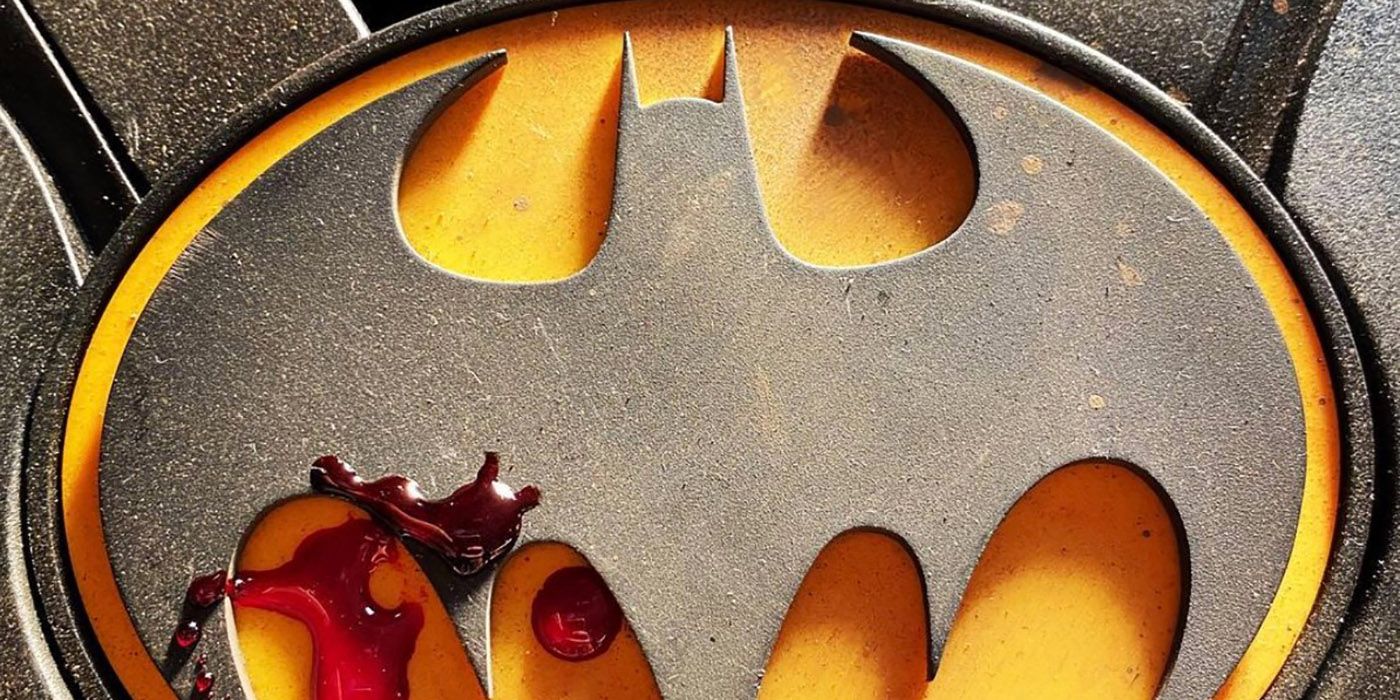 It is not uncommon for Batman stories to depict the hero as more brutal and violent the longer he goes on in his crime-fighting career. Who knows what Keaton’s character has gone through since the end of Batman Returns and what evil he has fought. Despite how dark Burton’s Batman films were, a bloody Caped Crusader is a step higher than what the filmmaker did in his franchise in terms of tone. It wouldn’t be shocking if Keaton’s Bruce has gone down a path so grim that he is now killing criminals. While Keaton didn’t have a Bat-Family around him, he may have started one after 1992 by perhaps losing one of his protégés. To have blood dripping from Keaton’s Bat-symbol implies The Flash movie won’t exactly have the same Batman fans saw 20 years ago.

The other dark possibility is that Keaton’s Batman will be facing a bleak fate by the end of The Flash film. One scenario is that Bruce will be part of a major showdown that may leave him more injured than normal, especially as this is an older Dark Knight. But it may be worse than that as Muschietti’s image could be teasing that Keaton’s Batman will die in The Flash movie, bringing an end to his version of the Gotham City vigilante. Despite rumors suggesting Keaton will be appearing as Batman in multiple DCEU projects, there has never been confirmation of that.

That is why there is the chance this image is teasing the potential of Keaton’s Batman return being his third and final time, letting The Flash film end his run officially. When it comes to a major storyline that involves time travel and the Multiverse, there have to be big stakes. Perhaps Batman dies by sacrificing himself for Ezra Miller’s Barry at some point. Only time will tell what is going on with Keaton’s Batman in The Flash movie and what this bloody image is supposed to insinuate.