Why Tékumel Is The Greatest RPG Setting Youve Never Heard Of

You Are Reading :Why Tékumel Is The Greatest RPG Setting Youve Never Heard Of 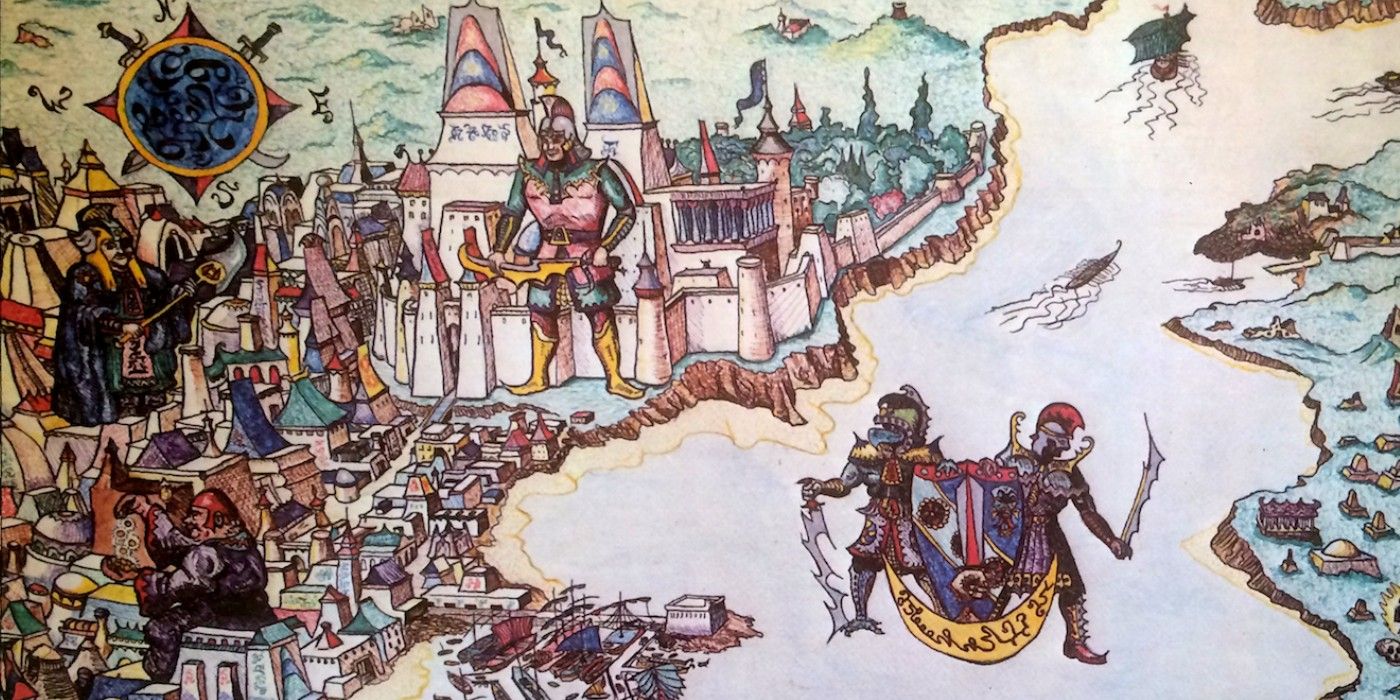 Most fantasy genre fans are familiar with J.R.R. Tolkein and his Middle Earth setting, a detailed fantasy world fleshed out and portrayed through poems, novels like The Lord Of The Rings, maps, and even constructed languages. Fewer fans are as familiar with M.A.R. Barker, a linguist from Spokane who created a fantasy world called Tékumel. The world of Tékumel never became a best-selling franchise like other fantasy sagas, buts its colorful original setting, detailed worldbuilding, alien ecosystem, and decidedly non-Western fantasy civilizations wound up greatly influencing other forms of fantasy media, from Dungeons & Dragons to video games like The Elder Scrolls III: Morrowind.

Muhammad Abd-al-Rahman Barker (1929 – 2012) was, like Tolkien, an academic linguist, one who distinguished himself through his contributions to the field of South Asian Studies. He taught and wrote dissertations on Urdu culture, the Native American Klamath language, and various myths/oral histories from across the world. He also happened to be a huge fantasy fan and occasional writer, inspired by the Dying Earth stories and other 1950s/1960s works of fantasy – the same works of fantasy that happened to inspire Gary Gygax, the creators of Dungeons & Dragons.

M.A.R. Barker wound up assembling the secondary world of Tékumel over the course of 50 years, describing it through created myths, history, art, novels, a roleplaying game, and even five distinct created languages. The resulting fantasy setting stands out from other secondary worlds thanks to being utterly different from the classic fantasy settings seen in The Lord Of The Rings or Conan the Barbarian. Rather than being inspired by European cultural motifs, Tékumel draws inspiration from Indian, Mesoamerican, Middle Eastern, and Egyptian mythology, then adds strong undercurrent of science fiction lurking beneath the setting’s veneer of fantasy.

Tékumel, A World Of Magic, Aliens, And A Desolate Sky 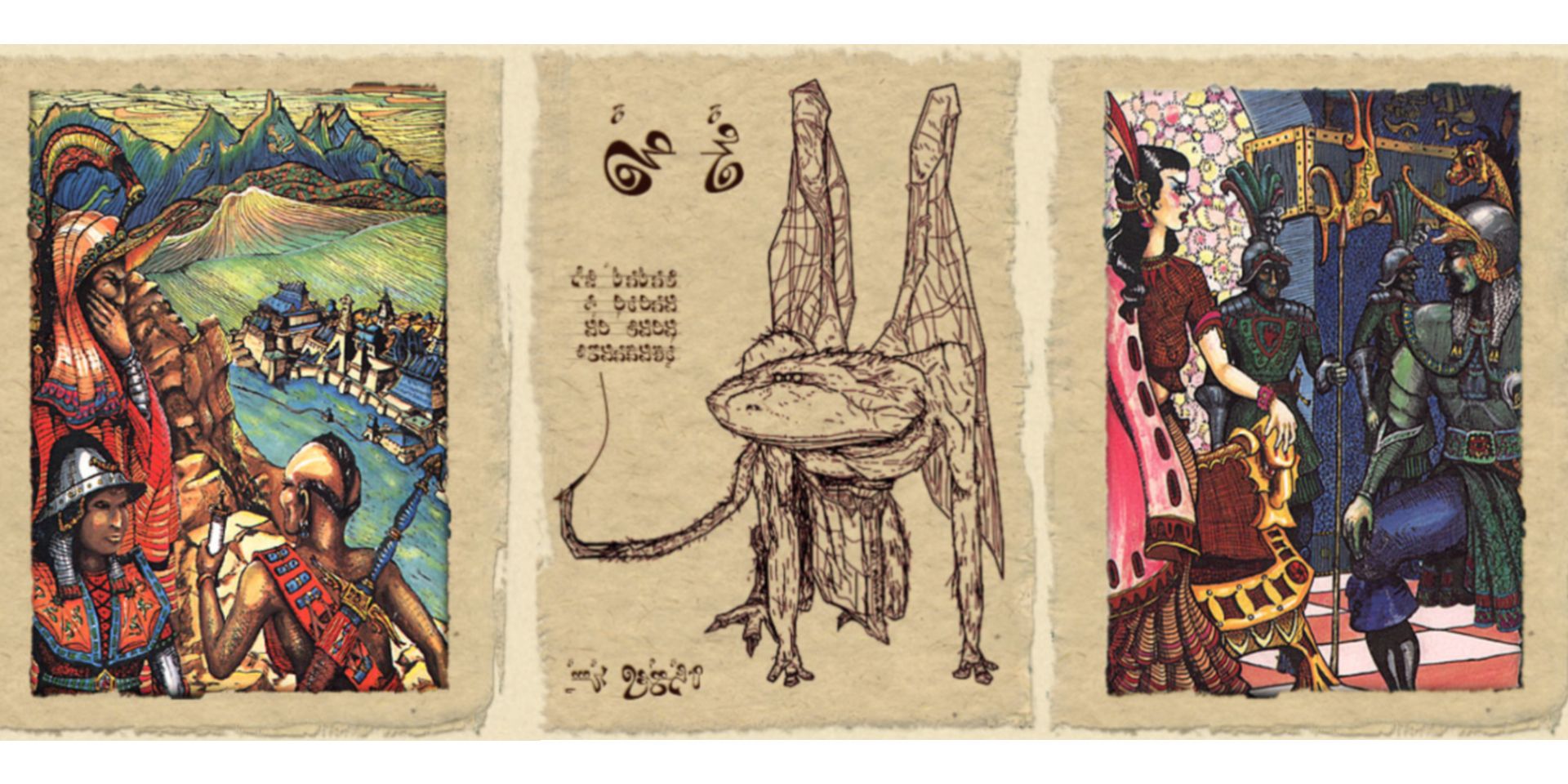 In the far-distant past, Tékumel was a vacation planet colonized by humans from an interstellar empire, who terraformed the planet with advanced technology, opened their resort cities to aliens from other galactic civilizations, and drove the indigenous beings of the planet into arid reservations. Then the star system of Tékumel was sucked into an isolated pocket dimension, cut off from the rest of the universe and exposed to the influence of extra-dimensional entities fundamentally indistinguishable from Gods.

As technology failed and civilization crumbled, the various races of Tékumel – humanoid, reptilian, and insectoid – reverted to a more ancient way of living, forming empires with elaborate caste systems, worshipping the forces of Stability and Change, and treating psychic powers and technological artifacts as sources of magic.

The “present-day” of the world of Tékumel comes across as very strange and alien when compared to most works of Western Fantasy – not just because of the alien flora and fauna, but because the various nations and cultures of this setting operate on values totally alien to modern Western sensibilities. Caste systems define a person’s social mobility, human (and inhuman) sacrifice is a cornerstone of many religious practices, being unaffiliated with a clan is seen as worse than death, iron is a scarce resource, and certain Gods reward faithful worshippers by turning them into zombies after death.

M.A.R. Barker’s Tékumel fantasy setting (and the various stories he wrote within it) never quite achieved the global fame of other fantasy classics, but refreshing novelty and richness of detail has directly and indirectly inspiring many other works of “new weird” fantasy, ranging from the Riftwar saga of Raymond E. Feist to the alien landscape of The Elder Scrolls III: Morrowind. Tékumel’s biggest legacy, though, is arguably the huge impact it had on the world’s first roleplaying game.

Empire Of The Petal Throne & How It Influenced Dungeons & Dragons 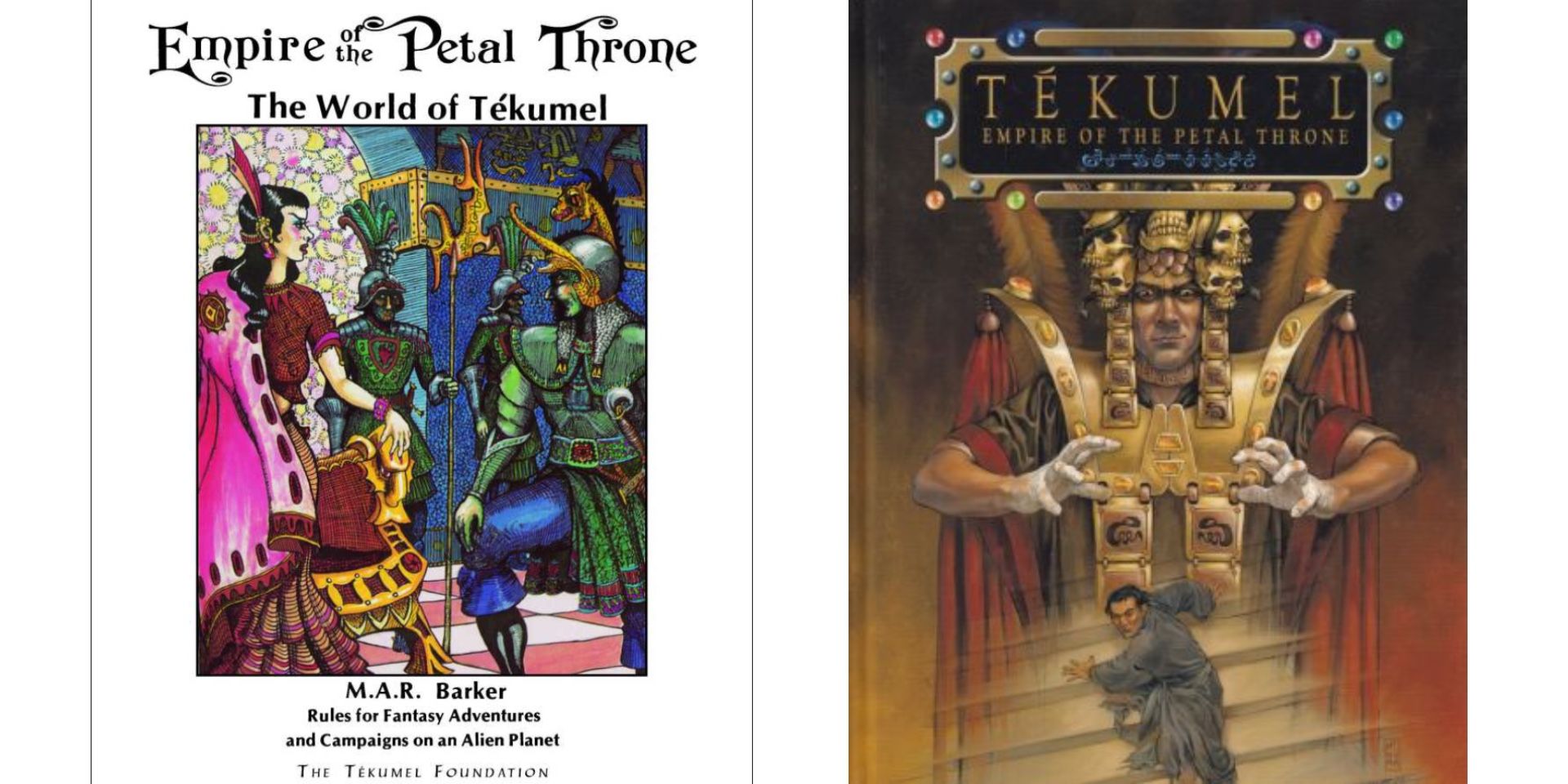 Shortly after Gary Gygax and Dave Arneson released the first prototype rulesets for Dungeons & Dragons, M.A.R. Baker took the groundbreaking mechanics of the world’s first roleplaying game and created a self-published RPG set in his world of Tékumel. This RPG, titled Empire Of The Petal Throne, lets players adventure through the vividly drawn empires, landscapes and cultures of Tékumel, taking on the roles of intrepid outsiders who must earn the trust of the xenophobic civilizations they’ve immigrated to by going on dangerous dungeon-delving expeditions. Character classes fall into the familiar divide of warrior, priest, and magic-user, while leveling up increases a player character’s social status in the Empire along with their personal power.

Besides exposing gamers to a novel, non-Western science-fantasy setting, Empire Of The Petal Throne also introduced several innovative ideas to the then-nascent tabletop roleplaying genre, such as Critical Rolls/Hits (PCs did extra damage with their weapon if they rolled the maximum amount on their twenty-sided dice) and non-combat characters skills such as cooking, weaving, alchemy, animal-training, or perfume making. Gary Gygax and his colleges at Tactical Studies Rules were so impressed with Barker’s intricate world-building that they re-published Empire Of The Petal Throne in 1975 as a stand-alone boxed game set, making it the second-oldest official roleplaying game in history after D&D.