Whether saving the world or enjoying some downtime, Wolverine can’t stop seeking out death, suggesting something is very wrong with Logan. 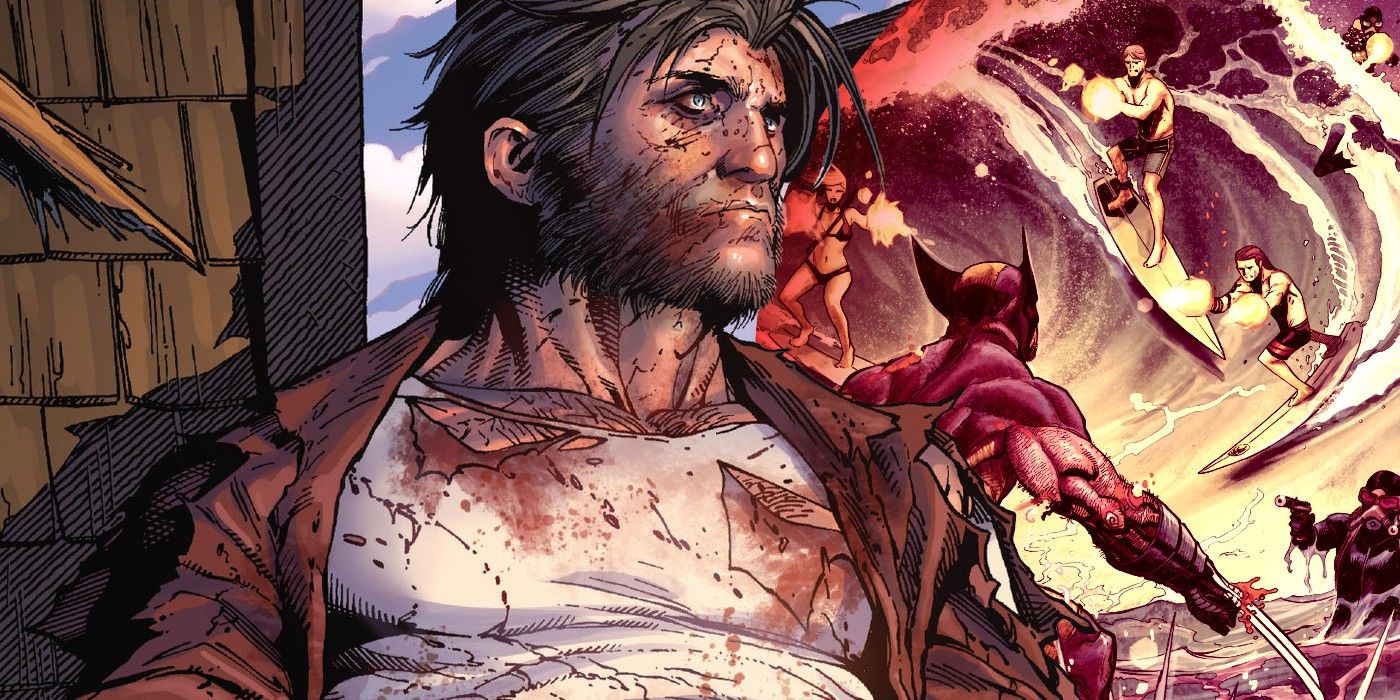 Warning: this article addresses themes of suicidality, and contains spoilers for X-Force #25!

James “Logan” Howlett has lived for centuries, but that doesn’t mean Wolverine is afraid of death. In fact, in X-Force #25 it seems with Krakoa’s new Resurrection Protocols that Logan is actively trying to defy his seeming immortality, trying his hardest to die repeatedly and brutally. While he has a gruff appearance, and loves living on the edge, there are a few things that have truly caused Logan to fear for his life, and drowning is one of his most directly expressed fears.

Wolverine’s fear of drowning is incredibly reasonable, and in line with his other established views on life and death. In Wolverine: Black, White, and Blood, Logan is shot in the gut by a Reaver and jumps into the ocean. As he begins to sink, and gets attacked by sharks, he reflects that his heavy adamantium-laced skeleton will sink to the bottom of the ocean, and he will eventually heal and come back to life before drowning again, getting stuck in a perpetual state of dying and revival unless someone finds him. Other stories have suggested that drowning would lead to brain death, destroying Logan’s consciousness even if his body eventually healed. Taking into account that the only realistic ways that Wolverine could “die” (besides the incredibly rare Muramasa Blade) would be drowning or being flung into the sun, his new hobby on the island of Krakoa is even more shocking.

In X-Force #25 – with art by Robert Gill and writing by Benjamin Percy – Wolverine picks up a new, and deadly, hobby, after master-builder Forge makes Logan a balsa wood surfboard lined with adamantium, making it into a sports item and a weapon. Wolverine immediately takes his new toy into the crushing Krakoan ocean waves, and almost immediately brutally wipes out, bloodily crushing his body against the coral sea floor. As Logan drowns, sinking into the dark abyss of the water, he is saved from his greatest fear by another surfer, thinking, “…we’re all bits of meat getting ground up in the jaws of the universe.” 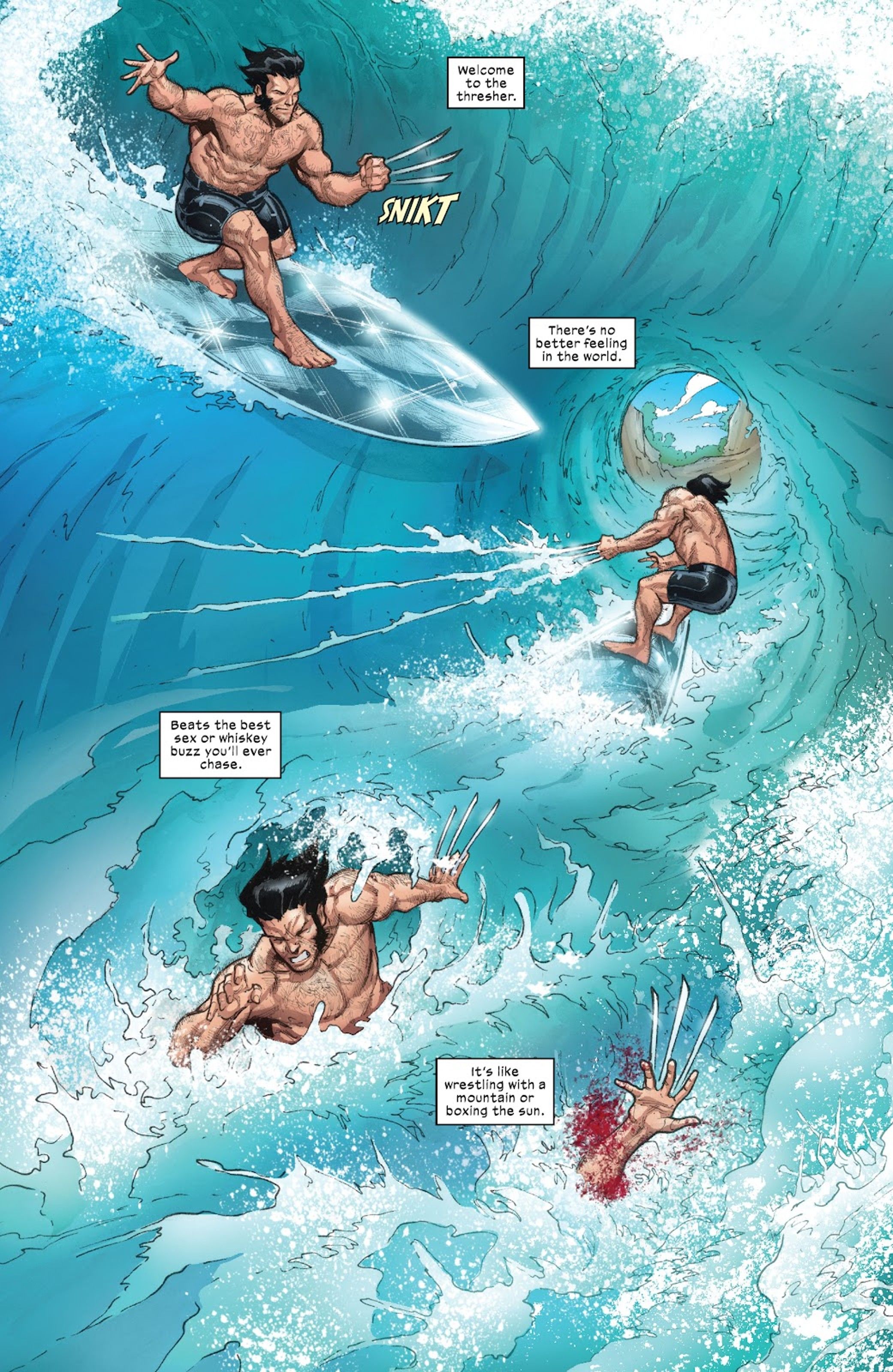 Wolverine is not just being flippant about his death, he is actively engaging in an activity that could make his greatest fear occur: drowning repeatedly, experiencing the terrible fate with which he once – with incredibly regret – ended the life of his son Daken. It was a surprise when Logan was supportive of Laura Kinney, his biological daughter, going into the Vault, where there was the risk she would experience centuries of subjective time. Logan tends to take risks so no-one else has to, but when the potential danger was extending his life, he allowed Laura to go instead. Now, he spends his “work” time attacking Orchis with X-Force and dying again and again at the hands of Nimrod, and his leisure time in the one normal situation that could kill him. It seems that the immortality offered by Krakoa is making Logan ill at ease, since it is clear he is not just riding his surfboard for the thrill of it – in fact, Logan is spending as much of his time as possible doing things that risk his life. Whatever the reason, it’s clear that something is compelling him to seek out death.

Logan has spent some recent time reflecting on his place in Krakoa, where the honorable man is still being pushed into violent, murderous situations, and whether he is ready to move on from the stability and banality of the island. There is definitely a more positive way of viewing Logan’s new hobby: Wolverine could be truly comfortable in Krakoa and has gotten over his fear of swimming and drowning since he knows he can be detected by Cerebro and resurrected… but with the upcoming X Lives/X Deaths of Wolverine event, it seems like X-Force #25 might be finding a way to rationalize big risks Wolverine will be taking in the supposedly era-defining event. To anyone having negative thoughts, reaching out to loved ones or calling the Suicide Prevention Lifeline can be incredibly helpful resources.