DC has shown that as good as Batman is, Wonder Woman and Superman still have one particular advantage over him – and it’s an important one. 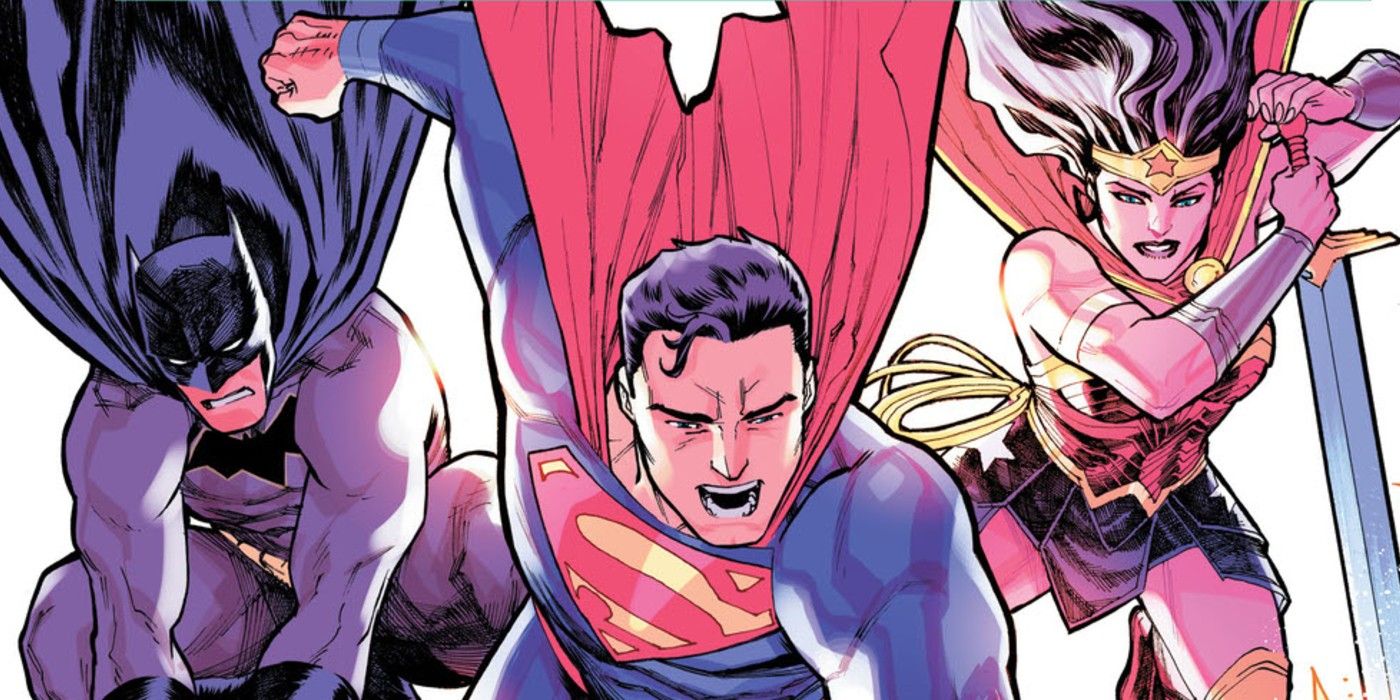 Wonder Woman and Superman are masters of the quick change, but Batman can’t match them. Sensational Wonder Woman #6 places Wonder Woman in a situation where she has to be ready to fight despite being in an evening gown. This isn’t a problem for her, but Batman hasn’t quite figured this out.

Superman’s phone booth transformation is an iconic vintage aspect of the character. Clark Kent wears his costume under his shirt whenever he goes out so he is always prepared for action. This is also a classic component of his identity, with comics, merchandise, and fans replicating the Superman suit under a top shirt image. This is actually a technique that Wonder Woman is also familiar with.

In Sensational Wonder Woman #6, Mr. Freeze crashes a gala thrown by Mr. Freeze. Created by Alyssa Wong, Eleonora Carlini, Enrica Eren Angiolini, and Travis Lanham, this comic shows that even though it is Bruce Wayne’s gala, Wonder Woman is the only hero ready for action. She begins fighting in her gown, but quickly reveals that her iconic armor has been on underneath it the entire time – which surprises Bruce. Mr. Freeze and his henchmen are stopped by Wonder Woman, while Batman is nowhere to be seen because he currently has no way of doing what Wonder Woman and Superman do. 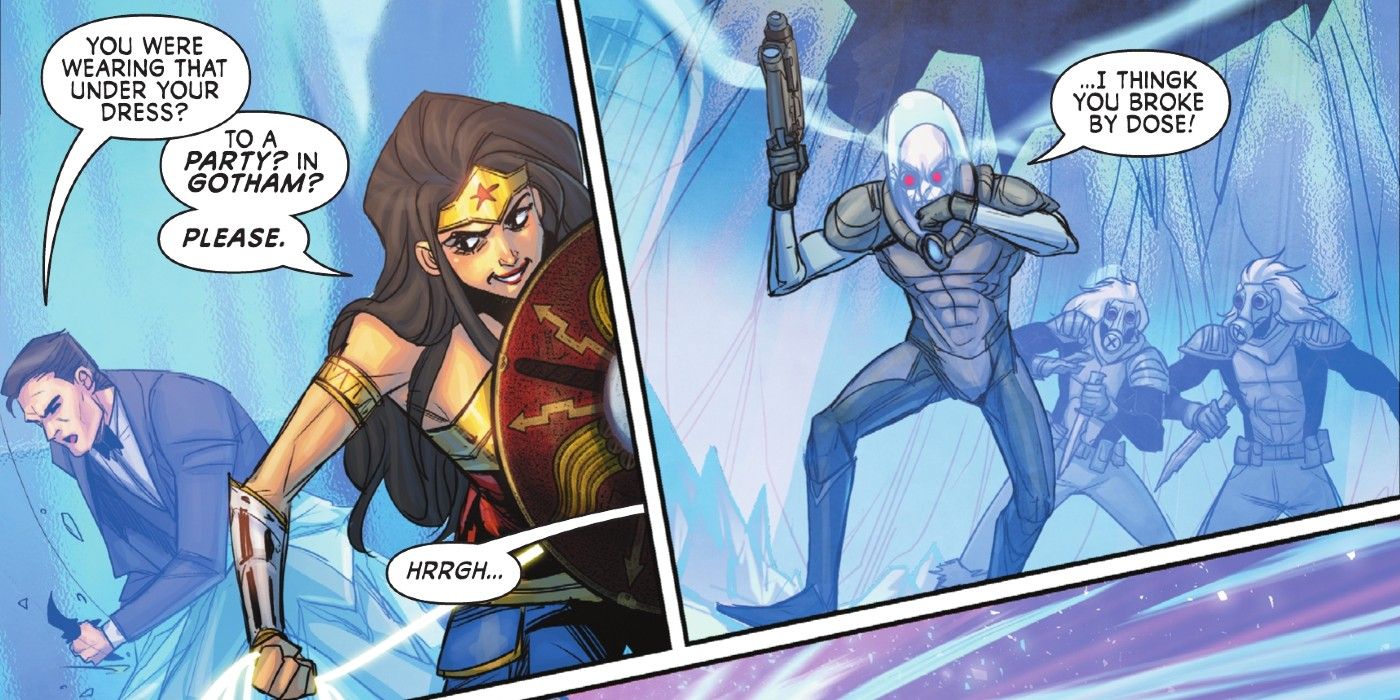 The implications of this are rather shocking. In order to jump into the action, Bruce would have to disappear completely, have a means of changing, and return. This is what he does in The Dark Knight (2008) when he realizes that the Joker is after Harvey Dent while hosting a party. He enters a hidden room and changes before facing Joker. However, he has home field advantage in that scenario. When out and about, it can be much tougher to get that opportunity, especially as the host for the evening with everyone’s focus on him. Even if Bruce were to pretend to be knocked out and slip away, he hasn’t been known to wear his Batsuit under his clothes, and he may have a hard time figuring out how to hide an extra cowl. This is especially true since he tends to wear stiff, thick armor that is hard to hide.

Without planning ahead the way his fellow heroes do and without adapting his costume somehow, Bruce Wayne will never be able to turn into Batman in moments like this. Although he is known for being prepared in many instances, he is far from prepared here. Batman has to sit out the entire fight, making it lucky that he invited Diana to the event. Not only is he focused on by Mr. Freeze, he is also frozen into a single spot. Despite chipping away at the ice with a batarang, he doesn’t manage to escape it. He’s completely out of commission. He was prepared for smaller things, since his tuxedo is made with a “protective weave,” but it doesn’t have temperature protection or a built-in Batsuit. Given his resources though, it is possible that he could eventually fix this shortcoming – and it seems like he plans to. 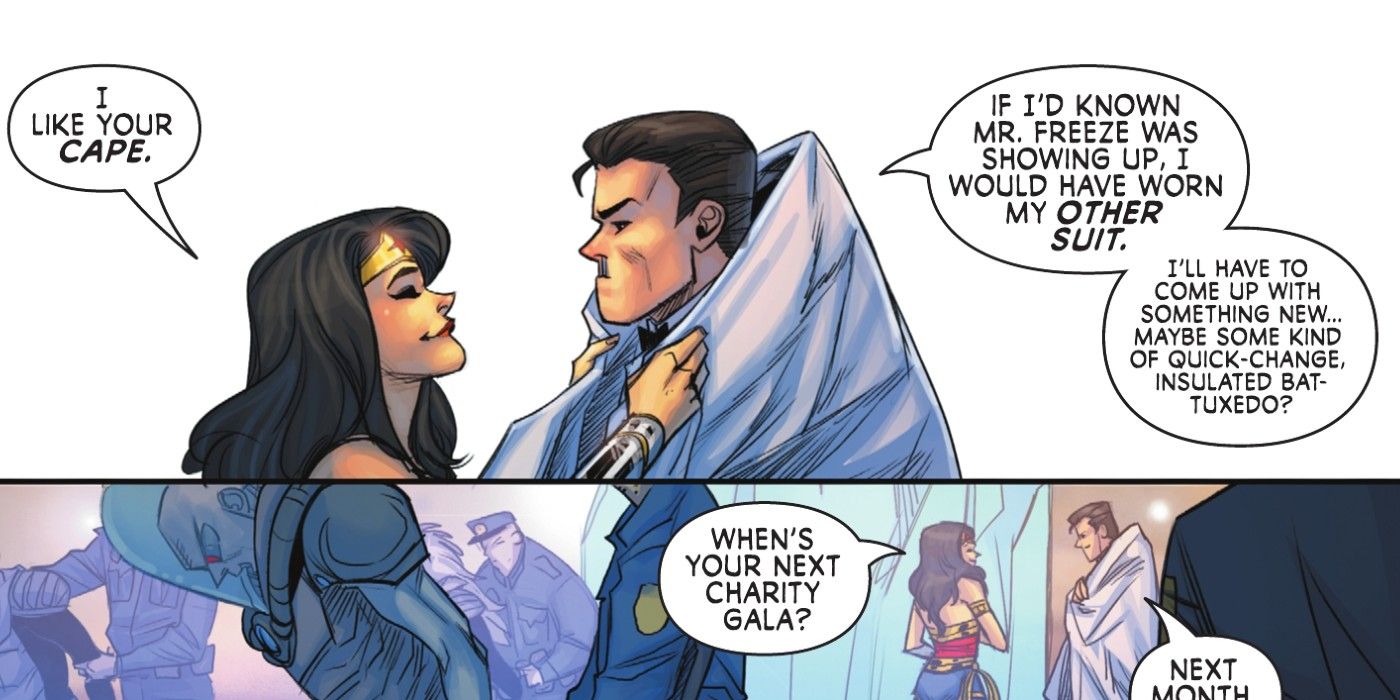 A quick-change Bat-Tuxedo sounds like it’d be much more effective than the lack of plans Batman currently has. To truly be prepared for everything, Bruce definitely needs a quick-change version of his suit – for moments exactly like this one. Given the research that WayneTech tends to do and the experimental fabrics and materials they have come up with before, it seems possible that he could come up with a perfect solution. Wonder Woman and Superman are always ready for action, but Batman has some catching up to do.